Indian or American is not the question anymore. As my identity pendulates with every day news that comes in – ‘Go back’, ‘shithole’, ‘Yes to Asians’, ‘legal-illegal’, ‘skilled-unskilled’, I have been sitting on the biggest seesaw of my life. Never had the alphabet H, the numerical 1 and the B for ball unnerved me as it does now. On the top of this stockpile is the battle I am facing post motherhood.

Cutting the long story short, I am an Indian residing in America (courtesy my husband and his hot IT skills) and my problems don’t end just because the roads are clean, traffic is organized, air is clean and one gets up in the morning without bothering about ‘pani, bijli, hawa, bheed’ I am drawn into something bigger and insanely difficult to handle. Something to which even ‘jugaad’ would say- ‘This is not in my job description’.

I thought generation X was cool, cool enough to blend in America; having been raised in a MacDonald’s-KFC times when women can easily raise their toast at their first campus placement party without eyebrows being raised. I belong to that generation. I could comfortably talk to my would-be husband about my ex and safely tell him – “I liked him, we were close, intimate, but you see, love didn’t happen,” and he retorted – “I understand that. I have been through it.”

… and an Indian American mom

But motherhood in America changed it all…so much so that I am surprised at the cosmic shift that can happen in life when a baby pops out of the womb. As if all the alcohol inside the body dried up, the hormones vaporized in thin air and all the morality, values and traditions of India have one door to knock on – MINE.

Thanks to the population of the Indian community here, I have fodder for my eyes and ears, to reinforce how we must preserve the Indian-ness in us, in our children; otherwise ‘times are bad’ and ‘anything can happen, you see’. Phew!

The questions hurled at me are too big to even grasp, forget follow.

“Does she know chants?” Really? She is just 5. I didn’t even know my alphabets when I was 5, and my parents didn’t care less. “Did you enroll her in for Hindi classes?”
“Don’t forget the festival as per US calendar!”
“Keep your home and your lifestyle Indian, everything will fall in place, don’t worry!”

With each question came flashes of my Indian life, experiences, and encounters- moral and immoral, virtuous and vile…

My daughter is Pihu. She is 4.5 years old and I have a strong feeling that I shall soon be responsible for her loss of a peaceful childhood. No! I do not want this and I consciously choose to raise my voice and say STOP! Let me set the record straight for myself and many like me who are ripped and frazzled by this identity crisis for their toddlers.

My daughter was born in America but has Indian origins. That is the long and short of her national/international identity. She will know about the Indian anthem and the American anthem, the national bird, the national flower, the currency, Abraham Lincoln, and Mahatma Gandhi. But this is just information which she will memorize. “Jana Gana Mana” is my national anthem. Will I teach her? Yes, but merely singing the national anthem does not prove anything. Living it in spirit does.

She understands Hindi and I am teaching her to write as well. But how much of Hindi I will be able to infuse in her is a question? How do I forget the famous elbow nudge of my parents, reminding me and my sister to answer in English when an uncle or an aunty spoke to us? From the by lanes of Agra to the college corridor in Delhi to the IT cubicle in Gurgaon, English has been my shining armor and worked for my advantage each time. We killed our own language in our own country and did not utter a word.

It is unfortunate but the reality. The language of English has catapulted us completely. My daughter should know her mother tongue, but if she doesn’t I am not ashamed. I will be truly ashamed when she talks in an impolite, rude, and disrespectful manner, be it any language.

India is a country of 1.3 billion plus people, we have 1.3 billion views/opinions/judgments about religion. What happens when 1.3 billion views compete against each other to proclaim whose religion is the best? Interestingly, religion defines us, binds us, and separates us all at the same time. Coming from an upper-caste Hindu family, I hold religious beliefs, and practices very sacred and close to my heart. There is one difference though- I am trying to make my daughter a God loving person and not a God-fearing one.

My father never believed in rituals and symbolic expressions of religion and faith. I have defined religion to my LO in two words-Sensitivity and Responsibility. The way I understand religion, actions and deeds are more important than rituals and you show your devotion to god by being a good human being. So, what if you don’t know the shlokas*? Am I teaching her? Yes, to chant and to live it both. If she forgoes the former, I am not worried. If she forgoes the latter, I am worried…deeply worried.

To say that religious practices and rituals give way to a good human being is to turn a blind eye, a deaf ear and a back to the bloodbath happening in the name of religion across the world. You cannot ignore it. To know she is an upper-caste Hindu is part of the identity he is born with, to believe that she and her religion is supreme is problematic. To force this supremacy on others is horrifying, frightening and dangerous. I am not even straying there.

Coming to food, it is a common sight to see Indian children gorging over the exported JUNK and people take pride in saying- ‘Oh! he is such a Mac D fan.’ Strange! If we eat pizza in India, it’s fashionable, if we eat pizza here- it is being -Un- Indian. If we play the guitar and sing the Beatles in India, its KOOL, but if we sing Hotel California here it is being Un-Indian. Do all the children back in India learn Bharatanatyam? Learning a dance form is great. Learning an Indian dance form is a choice. Does that make someone less Indian?

The Good and the Bad

What is ‘Indian’ about love, respect, kindness, and honesty? One finds all kinds of people in India and I am not to judge them. Lies are lies everywhere. Rude words hurt and kind words are recognized by every soul. Does it matter if those values come from India or Uzbekistan or the United States?

As of today, our country is currently fighting one of its biggest challenges- child safety and girl safety. At a time
when the nation is gripped in horror, watching the cruelest story of a pre-mediated rape and murder of a little girl that has a basis in religion, I need not say a word more. Is Indian tradition set far away from bringing up a good human being?

Raise them to be sensitive and responsible

What disturbs me most about life today and therefore my biggest challenge? The insensitivity. Raising a child who is sensitive to what goes on around her, considers her responsibility, however minuscule, in making this world a better place, and choosing the truth over the tempting lie is the biggest challenge for me.

If my daughter is sensitive and responsible, she will know that teen sex can be dangerous, drugs are harmful and marriage sacrosanct. She will know that elders deserve our respect, the family is the strongest bond you can nurture, and where you reside, ensure you plant a tree.

If we raised more sensitive and responsible children, the world would be a better place to live in. I want her to become a good human being first and not necessarily a good ‘Indian’ human being. I don’t even know what ‘good Indian human being’ is, for I see so many different facets of India in our own family. Which Indian are we referring to when we talk about India is the eternal question.

I want her to have morals and the judgment to differentiate the right from the wrong, the good from the bad, and the vice from the virtue. Isn’t this Indian?  Symbolism is great but living it is greater. A value can exist without a symbol but a value is reduced to nothingness if it does not translate into action/behavior.

This is my understanding about myself, my upbringing, my Indian-ness, my daughter, and her Indian-ness. And what I know about the way my parents raised us, it is similar to theirs. In fact, it is just the same.

Header image is a still from the movie English Vinglish 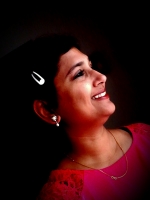