A Child In Kathua: When Rape Is A Well-Planned ‘Strategy’

Heartbreaking as the brutal rape of a child in Kathua is, it is part of the larger pattern where women are sacrificed in a 'strategic'  use of violence. 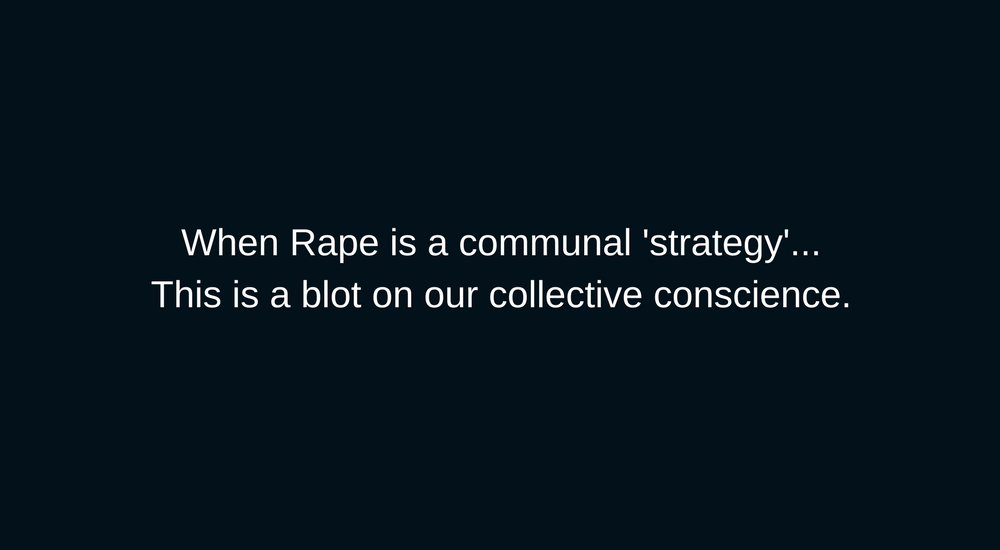 Heartbreaking as the brutal abduction and rape of a child in Kathua is, it is part of the larger pattern where women are sacrificed in a ‘strategic’  use of violence.

Trigger warning: This post contains some descriptions of rape and murder that could be disturbing for some readers.

I can hear her inside my head. Eight, just eight.

Brutally and repeatedly gang-raped inside a village temple in Kathua, the child was held captive for a week in January. She was sedated for hours on end before she was raped again, just before she was strangled and then hit with a large stone by six men, “just to make sure that she was dead.” One of these men was “invited” from Mathura, to “satisfy his lust,” as the chargesheet reflects.

The brutality and monstrousness in the incident can leave anyone feeling violently shaken. And even as it doubtlessly reveals the extent to which toxic masculinity thrives in a culture of patriarchy without being checked, there are two major things to think about in this incident.

Selective in our outrage

One, we are hypocrites in that we are known to express selective outrage. We are selective in our outrage. We are hypocrites because we decide who gets our hashtag sympathies and our candle-light vigils. Would things have been different if this were the narrative of a savarna woman? Would media have been driven out faster of its collective silence had this happened in New Delhi, or in Mumbai? Or would things have been different had this been the narrative of an economically advantaged community?

What makes us cherry pick in our activism, in our demand for change, and in our pursuit of justice? (and we are all guilty of this). It isn’t entirely false that we fall into a lethargic state of we-are-like-this-only until an incident forces us out of our inertia, to the point that we simply must act or speak out. And within those limited frames of reference, we choose to allow only certain narratives to knock us out of our privileged shells.

The abduction, rape and murder of the eight year old was a part of a planned strategy to drive out the nomadic tribe, the Bakharwal Muslim community, that the girl belongs to. According to the chargesheet, the motive for the crime was mentioned as being a bid to punish the Bakherwal Muslim community and scare them away from Rasana, Kathua. An article in the Wire explains that the Bakharwal community, also known as Gujjar-Bakharwal, is a nomadic tribe of Sunni Muslims. They live in the Pir Panjal region, and are largely goatherds and shepherds, and are spread out across Kashmir in India and Pakistan, as well as Nuristan, in Afghanistan.

The chargesheet indicates that the plan to “teach the Bakherwals a lesson” was allegedly hatched in December 2017, masterminded by a former revenue official. Along with him were his son, his nephew and his friend, and a police officer. They had deliberately chosen his son and nephew, as they were juveniles, and could be let off with lenient punishments. They had chosen the eight year old as a target because of her age, and managed to kidnap her when she went looking for the ponies she had taken to graze. The chilling, cold-blooded precision and planning with which this was executed is a blot on humanity’s collective conscience.

We are truly ignorant about sexual violence as ‘Strategy’

This leads me to point two, which is that we are ignorant about the way in which sexual violence is used as a calculated, brutal strategy in conflict. From the abuses men hurl at other men to such brutal violence, women are the target.

Think about it. Verbal abuse directed at men comprises abuses hurled at their sisters, mothers or daughters. From that end of the spectrum, take a look at the other end: calculated strategies to affect a whole community by targeting the bodies of women. Sexual violence as a “conflict tactic” is inexpensive to execute (you don’t need weapons) and extremely effective (because it plays on the patriarchies that unite the enemies). Armed groups, combatants and non-combatants alike use rape as a means to terrorize and control women and communities – be it the Kunan Poshpora incident or the Thangjam Manorama, or in the DR Congo and Guatemala.

Subjecting women to sexual violence earns the woman stigma. Built on the foundations of patriarchy, families wind up turning these women out of their homes, and when women are spurned, the backbone of a societal structure is broken. Men don’t want to marry women subject to sexual violence. Families don’t want to have them around anymore – either the stigma is too much to bear or the fact that these women burden them since they can’t be married off (especially true in societies where marriages bring in bride prices). Sexual violence is calculated, brutal and absolutely bereft of humanity. Using sexual violence as a modus operandi in any conflict is intricately woven with the hegemonic desire for power.

A child, all of eight, bore the brunt of this cold, calculated and brutal ‘strategy’.