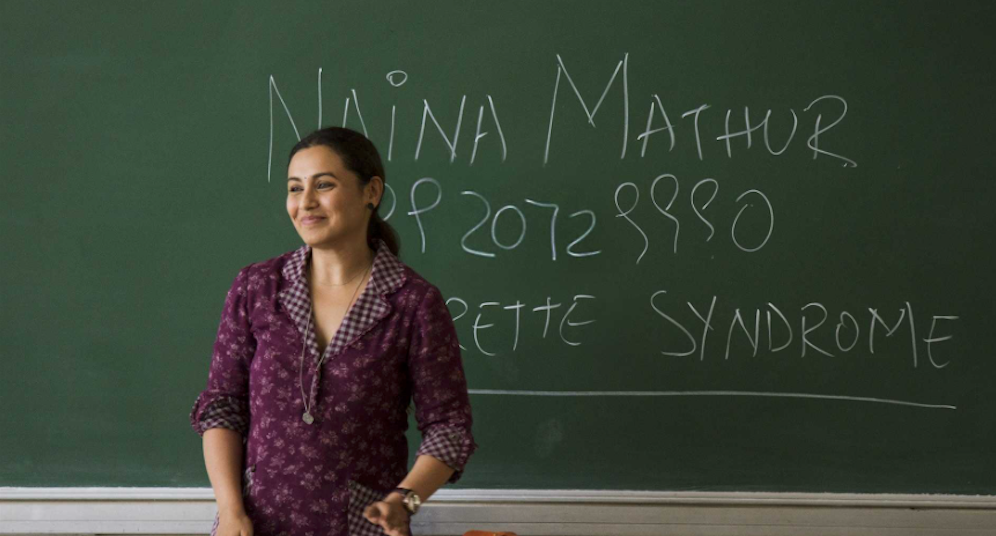 Hichki Is A Well Made Movie, But Some Things Could Have Been Better

As an educator who works with the differently abled, I was very excited to see a Hindi movie trailer show a character with different life needs. Hichki, with Rani Mukherjee in the lead as Naina Mathur, is a movie that follows the story of a person with Tourette syndrome.

Tourette syndrome is characterized by involuntary tics, motor or verbal or both.

Hichki is a movie that needed to be made for several reasons. It also left me quite untouched for many other reasons. As someone who usually cries when warranted at the movies, this was a switch for me. Maybe for some, it was a revolutionary concept that all children need to be treated as equal and seeing inequality in treatment moved them. For someone like me, whose ‘children’ in school routinely work harder in schools and homes and just as routinely don’t get due credit, are disproportionately targeted, this is an everyday work truth. I am guessing here, since I went fully prepared to cry!

What distinguished Hichki from other movies?

First, adults with different needs were portrayed in the job market like everyone else, looking for a job. It is their right to be included and to work, live a full life as much as every other neurotypical person.

The movie spoke of Naina’s difficulties staying in school. The school that embraced her was school no. 13 with the others asking her mother to find a special school for her. Schools in India, despite the PWD Act of 2016 are not inclusive. This is despite evidence that both the differently abled AND neurotypical children do well from inclusive classrooms. Studies have shown that ‘more students without disabilities made comparable or greater gains in math and reading when taught in inclusive settings versus traditional classrooms where no students with disabilities are included’. In a country as mad about the sciences and marks as India, we should be scrambling to get inclusive in our schools!

A point to ponder: if Stephen Hawking’s condition had deteriorated when he was in school versus in college, would we have benefited from his scientific work worldwide? Arguable. Imagine what a world that would be and how many people’s contributions are potentially not enabled by our education systems today!

The movie also spoke about the Right to Education Act. RTE was an act that was passed in 2009 but was only implemented in the past 4 – 5 years by schools. The Act provides for education of vulnerable children between the ages of 6 and 14 by providing a 25% quota in Grade 1. This is a glaring inaccuracy in the movie since the oldest child through RTE is likely to be in Grade 3 or 4 depending on when the school started implementing the Act. Except in Delhi where a similar provision has been in effect for longer (the movie is set in Mumbai), it isn’t likely that there are teenage RTE students. If they were taken over from the municipal school as was explained in the movie, these students are not there under the RTE Act.

RTE has been a controversial law with private schools kicking and screaming that this is an infringement on their rights. Social justice on the other hand and the lack of standards in government schools celebrates the law as an equalizer in some ways. Students under this quota have not been completely included in many schools. Many have used questionable means to evade the law using loopholes provided for minorities when they are not minority institutions! On the other hand, the law does not recognize challenges that these children face from just being thrust in a school and expected to swim. The classic letter of the law versus spirit of the law conundrum.

The movie spoke about RTE. The only other one I have seen in recent times is Hindi Medium. I am, by no means, up to date on every movie, so I could be completely mistaken but there are very few movies being made on this issue. That it spoke about RTE was notable even if there were no deep dives into the many issues touched upon.

Rani’s character tried different teaching methods. Even if these are hardly practical in the real world, it was nice to see some thought put into hands-on learning. It works, there are studies that prove it and yet, 99% of our schools don’t use much more than the lecture method with blackboard teaching. So scribble away on the basketball courts and fly your airplanes off turrets…in the absence of a B.Ed degree worth less than the paper it is written on, we shall have to depend on the movies for advancements in the education sector! The revision of the curriculum in Dec 2014 added a half paper on creating inclusive schools. Apparently teachers in mainstream classrooms are supposed to be proficient in managing the needs of the differently abled. Many of us continue to wait, we are not holding our breath!

Rani Mukherjee was pretty fantastic in the role and Tourette syndrome got public mention. These points above made the movie noteworthy.

What I wish was different

Sometimes one hammers in commonly held prejudices in order to break them. I am not certain that this emphasis on the ‘unacceptable’ behavior of children and calling them RTE children did enough to break the stereotype or even move opinion enough in the right direction. Showing their challenges is all well and good but I got the impression throughout the movie that they were at the mercy of our charity as the middle class and should be lucky to be a part of this elite school. It is their right but those of us not secure in our abilities seem to need to take them down as a reaction. The charity angle was a downer. The tons of melodrama wasn’t that much better either.

Too many issues were skimmed over without even one deep dive into any one of these eminently debatable social issues.

Overall, Hichki is one of those movies that is likely to be a part of the breakthrough, but not the breakthrough itself. It is no Taare Zameen Par – I know people who self diagnosed their dyslexia after watching the movie (and later got professional opinions that concurred) when they were teenagers, after they dropped out of school because there was no awareness or support.

Expecting a movie to magically change societal mindsets is expecting too much. I think we need more movies made on RTE and its implications. And the many, many different needs that exist in life. This is a notable first step.

Hichki: Rani’s Naina Mathur Delivers An Excellent Lesson On Being An Inclusive Educator

The Hic: Yes, It All Began Around The Age Of 5 When I Started Stammering