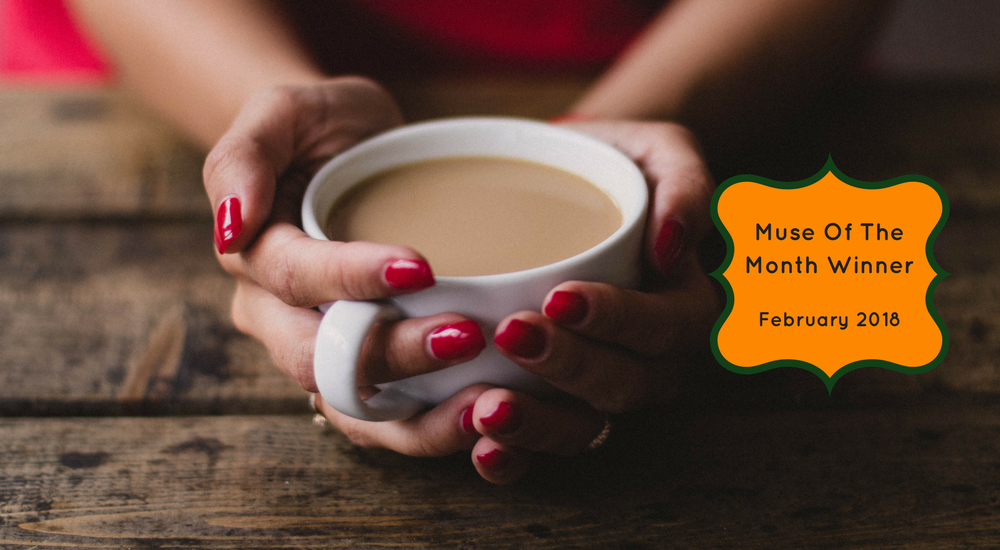 She continued putting coffee powder in two mugs. It was still strange to hear about her father from Chahana, who had once been her best friend, but now was her stepmom.

The second winner of our February 2018 Muse of the Month contest is Shreya Das.

Anaya opened the door to Chahana who whooped and gave her a hug, enveloping her in the Chanel perfume cloud surrounding her.

Anaya hugged her back, “So how was your trip?” She asked as she walked back to the kitchen to put on the tea kettle.

“It was fabulous, but you know your dad. He won’t give me time to do proper shopping. Imagine going to Paris and not being able to shop to my heart’s content.” Chanaya plopped on to the easy chair in the living room and looked out at the balcony which was a riot of colors, with different flowers blooming.

Anaya’s hand stilled for a minute, then she continued putting coffee powder in two mugs. It was still strange to hear about her father from Chahana, who had once been her best friend, but now was her stepmom.

“We should do a trip to Paris. You know like a girl’s trip. It will be so much more fun.”

Anaya smiled, as she handed the coffee to her and took a sip from her own cup.

“You know how work is. Business is expanding now and it’s really difficult to get time off.”

“For god’s sakes Anaya. You own the company; you can take the time off, whenever you want. Why do you work so hard?”Chahana asked taking a sip.

“Because I like doing it, and technically the company still belongs to both me and daddy as he owns half of it. And now to a certain extent even you.” Anaya looked at her from the rim of her cup.

Chahana took a sip before responding carefully, “So your father told you.”

“That he gave you 25% stake in the business, that also from my share. He didn’t need to tell me, I had to sign the papers for it to happen.”

Anaya smiled and said, “See that’s the thing. I think you do understand.”

She saw the flicker of unease in Chahana’s eyes before she could mask it. She saw her take another sip and continued.

“You were always intelligent, even though you tried to hide behind the dumb demeanor. But you topped the business administration class. You sought me and became my friend cause you know I was Abhay Dhawan’s daughter. You knew he owned an entire group of companies of textiles, auto part manufacturing and realty. Then you did your research and found that my father was a widower and proceeded to ensnare him.”

Chahana had paled, she was having trouble breathing. “Anaya, I don’t know what….”

Anaya help up her hand, “I am not finished yet. I invited you into my house and into my life as a friend, not knowing that you had an agenda from the very start. You knew my father was lonely, so you targeted him. Coming over for dinners and family picnics. Spending time with him, talking to him about his interests, going on golf games with him. I realized what was happening and was happy for my father. He had been alone, immersing in work to keep himself busy. I was glad to see he had companionship. Even though the world termed you as a ‘Gold Digger’, I believed in you, believed that you had genuine affection for my father.”

“Anaya, I can’t….” Chahana was gasping now. Her hands clawing at her blouse as she felt her chest constricting. She got up to try and walk to the balcony, but toppled and fell on the floor.

Anaya calmly got up and sat next to her.

“Then I got to know, about you and your boyfriend. Yes, the man parading as my father’s driver. I walked in on both of you the day my father was out of town. I came to give you a surprise visit and saw the two of you together, in my father’s bed, plotting his murder. You had managed to convince dad to give you 25% stake, then you were going to change his will to ensure you got his 50% also hence making you the controlling partner. After his death, which you boyfriend would mastermind and make it look like an accident you would take over. You would rule the company that was made from our sweat, love and hard work. I could not let that happen.”

Chahana was now looking at her with wild eyes, sweat pouring down her face, her breath becoming shallower.

“I put poison in your coffee. This particular poison is hard to trace, it dissolves in the blood. I will now wash our cups and then call the ambulance. The world will think you had a heart attack. My father will despair but will gather himself. Your boyfriend will have to be fired, but I am sure he will find another enterprising companion. I am sorry our friendship had to end like this, I really liked you. But you see – I am not a Cinderella, I was not going to let the evil stepmother have her way.”

She waited till Chahana finally stopped breathing, then got up and washed the cups.

Shreya Das wins a Rs 250 Amazon voucher, as well as a chance to be picked one among the top winners at the end of 2018. Congratulations!