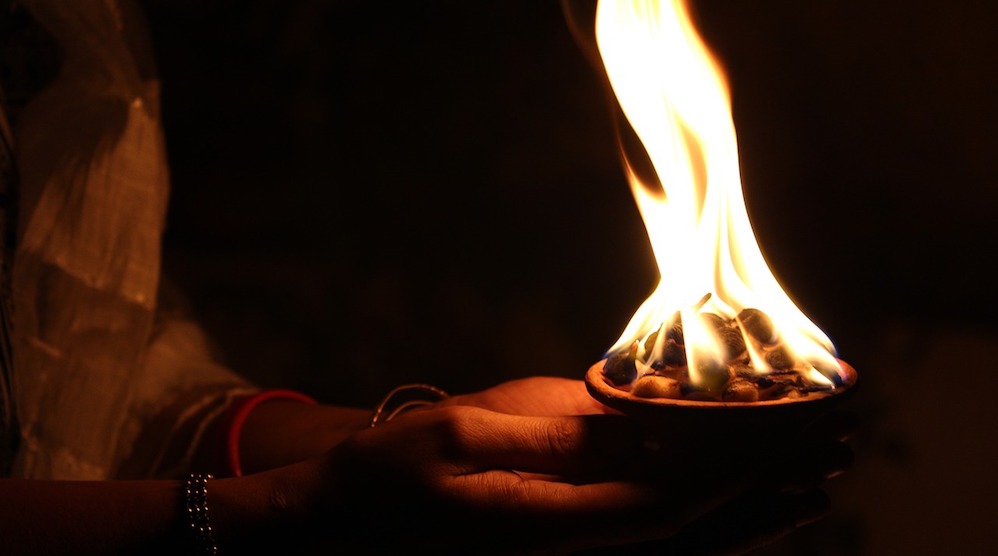 The King Is Dead, Long Live The Queen! #ShortStory

This Queen will not let her people die for the sake of ‘honour’. This story of the queen who takes on the odds, will keep you spellbound.

The air was blood and smoke. The roaring of the war in the distance, circulated within the fort like an ominous echo. She sat, eyes shut, in front of the altar of the Goddess. Her entire body shivered, and the salt of her tears mixed with the salt of her sweat. A soft footstep behind her—bad news was here.

“Our men are losing, Your Highness. Do you have any orders for us?” asked her lady-in-waiting. There was a tremor in her voice; an unexplained dread.

“I spoke to the King before he rode out to battle. We must do what needs to be done. Have we enough firewood and oil?”

“Then you know what to do. It will be as we discussed before. Light the fires. And when everything is ready, gather all the women and children together and meet me here.”

“As you command, Your Highness.”

It was done. The war was over, the king was dead, and The Conqueror was coming.

The temple floor was soaked in tears, and even the walls could not bear to hear the mourning wails of a thousand widows and orphans. There was a deadening emptiness and silence to the screams.

“Mother,” the Queen prayed, “Bless us. What we are about to do feels cowardly. We are scared. But we are women. We can’t fight. We have not been taught to protect ourselves—it was the dharma of our men to do so. And now we must define our dharma, Mother. Bless us.”

A ripple of “bless us” went around the room.

And then The Queen roared, “Jai Bhavani,” and the room roared with her.

“Children, the elderly and pregnant women first. The others will go last. Guard the door. We must not be disturbed,” she ordered.

By the time The Conqueror and his horde breached the fort, not a trace remained of the women.

The enemy soldiers ran amok through the magnificent rooms, drunk on the heat of a bloody victory. The treasury was ransacked, beautiful apartments ravished, and anything they could get their hands on was broken. But where were the women?

The Conqueror was furious. All that effort for an empty fort?

“Where are they?” he bellowed. “They cannot escape. Find them!”

“Great Warrior, the women are not in the fort. They must have escaped somehow. But they have left us all their wealth. They have even cooked for us before they left. The kitchen fires have been burning recently, and there is a feast set out in the central courtyard. I think they want us to leave them alone in exchange for all that.”

“What, you miserable worm? Out with it!”

“The men…the men are tired and hungry. They want to eat. I mean, after all they are only women, and like you said, they will not have gone far. Please, our lord and master, let the men eat, and then they will be fresh and all the readier to search.”

“Hmphh…okay, let us eat. Quickly! I don’t want those women to get too far away,” he growled.

“Why would the women leave us food? This is suspicious. The food may be poisoned.”

“Yes, yes, very good,” The Conqueror grinned menacingly. “The food may indeed be poisoned. You must be rewarded for pointing that out. So, you shall have the first bite of everything.”

“Eat! Or I shall have your head chopped off and fed to the dogs.”

The general’s hands shivered as he picked up a handful of rice. The aroma was enticing, and the richness of saffron woven like golden threads through the dish should have made his mouth water. But his mouth was dry, and his throat contracted painfully as he tried to swallow.

A second went by; a minute; a few minutes. He did not drop dead. A sigh of relief shuddered through him, and his face registered a pleading expression as he looked at The Conqueror.

“Yes, I see that. Let us eat!” he announced, and his army fell upon the food greedily.

Outside, the sun slipped, bloody and exhausted, lower and lower in the horizon.

“How much time will it take for the herbs to work?” The Queen questioned the chefs.

“About an hour, Your Highness. Assuming the men have eaten heartily, they should be sedated by now and they will remain sleeping well into the night.”

“I hope so too. The next stage of our plan requires them all to be deep asleep. Is everyone ready?”

“Then let us go. For King and Country! Jai Bhavani!”

An hour later, a hidden trapdoor in the temple opened gently, and a hundred women, led by the Queen, slipped out silently into the darkness, that was suddenly disturbed by the brightness of the torches they carried. Fleet-footed, with soundless steps, they ran through the fort, reaching its farthest points in all directions, especially the exit points.

Once each woman had reached the spot she was allotted, she set on fire everything she could in that place, and then moved back towards the temple, torching everything in her path as she went.

The Queen too, was on her mission, setting fire to so many of her beloved spots in the fort. The smoke clouded her vision and its stinging elicited tears. A hand on her shoulder pulled her roughly, and the torch fell from her hand.

Like a whip, her hand lashed out, as she slapped him. Still groggy from the drugged food, he staggered back. Before he lunged again, she brought out the dagger that hung at her waist and slashed his throat. With a sputter, he fell. Picking up her torch, she ran faster through the rooms. The Conqueror and his men would wake up anytime now, owing to the heat and smoke. But they would be slow and unsteady, and that was their advantage. “Faster, faster,” she chanted to herself, as she raced towards the temple, setting everything on fire. In many places they had already soaked the curtains and furniture in oil before they left, and so everything embraced the fire.

And there, the temple, just a few feet ahead. Already, there were sounds of soldiers screaming. They would be here soon. She had no time to count if all the women were here. It was time to leave.

They slipped through the trapdoor before anyone came looking, and once through, they blocked it from the inside. It was well hidden, and unless anyone knew it was here, they would never find it. They were safe. They hurried through the underground tunnels, to where the others were waiting for them.

The fort burned in the distance, a mini sun, that burned with the brightness of their vengeance. The enemy would have searched for water in the bath houses to extinguish the flames and found that there was none. Every single container had oil in it. They could only hasten their death.

No woman or child had been left behind. Every single woman who had accompanied The Queen on her mission had come back, unscathed.

“Isn’t this a war crime, Your Highness? Attacking a sleeping enemy and running away from war is a cowardly act. It’s a blot on the name of our ancestors.”

“Are we the equals of our enemy, lady?” The Queen questioned, staring at the flames licking the sky. Her face, lit by the distant light, was prideful. “Had we been trained for warfare like our men, then yes, what we did is cowardly. But we are not, so the only weapon in our arsenal is deceit. And do not forget, even the Lord Krishna is called Ranchhod, because he abandoned Mathura and ran away to Dwarka to avoid fighting a war with Jarasandh, that he knew his people couldn’t win. And then he used the Pandavas to defeat Jarasandh thorough trickery and cunning. I do not feel we did wrong. Dharma, righteousness, they are all subjective. And here, the protection of my people was my only dharma. We would only have died, needlessly, in an open fight, and surely some of us would have been captured, and lived a miserable existence as slaves. If we die, then the memory of the men we loved will die with us. We must not die. We must live. And I did everything I could to make it so. If the world blames me for it tomorrow, I do not care. I do not consider it a dishonour. Let us go now, we must keep moving till we are absolutely safe.”

The Queen took one last look at the remainder of the opulence and splendor that her life had once been. Now, dressed like a commoner, she knew not what the future held. But now, she felt, in every sense a Queen.

The Revenge Of The Dusky Queen

Not Kind, Not Fair And Not Just: The Amba, Ambika, Ambalika Story You Don’t Know

The Weight Of The Crown [#ShortStory]