Rukma And Kuldeep: A Mother’s Story

When the violence of toxic masculinity gets unbearable in one family, what can a mother do? What does this mother do? Read this surprising short story. When the violence of toxic masculinity gets unbearable in one family, what can a mother do? What does this mother do? Read this surprising short story.

Rukma looked at the setting sun and sighed.

Her back ached and her feet had blisters. If only she could catch up on her forty winks. No luck there. The boy, Kuldeep would be back, demanding hot Rotis and spicy vegetables. Even a minute’s delay would unleash utter mayhem and result in his beating up one of his older sisters. Sometimes, he hit her too, his own mother.

Rukma wiped her moist eyes and shouted at her two girls.

“Get cracking. Knead the dough and cut the onions. Grind the masalas”, she yelled as she pressed her swollen calves.

The girls left whatever they were doing, conditioned as they were by regular lashings and wallops, to rustle up food for their younger brother. The fire was raging under the tava and in Rukma’s heart as she heard the faint wails next door – from Chanda’s house. It had been three days and yet that searing wailing wouldn’t stop. Who cried over a dead girl for three whole days? What was this world coming to?

The eldest girl cut her finger and was wincing.

“You, the eternally clumsy one. Wash up and put haldi. Choti will make rotis, you season the vegetables. Quick, Kuldeep will be here soon!” The girls looked at her vacantly and hurried up.

Rukma thought about her boy. The boy who came out tearing her insides was born after submerging four unwanted girls in the nearby canals. That itself should have been an indication of her future. Pampered thoroughly, Kuldeep turned out to be a class one vagabond, who along with his father, the Mukhiya of the village, bullied his sisters and mother. Luckily for these women, the father died in the fields after a snake bite. Now Kuldeep became the head of their family and it was as if a demon had possessed him.

He regularly pawed the girls of the neighborhood calling them ‘items‘. The mothers openly cursed Rukma while locking up their daughters. What could she do really, when she herself wasn’t safe from his blows?

“Check the salt in the vegetables, once done. Don’t aggravate your brother! Let us have one peaceful night at least!” Rukma winced with pain as the girls continued with their chores.

Rukma decided to lie down for a while. Thankfully, the wailing sounds from Chanda’s house seemed to have stopped.

Chanda was the uncrowned neighbourhood beauty. Rukma doted on her. She often wondered, if one of her drowned girls, if given a chance to survive, would have turned out radiant, like Chanda.

Rukma hoped against hope that Kuldeep wouldn’t lay his dirty hands on her. But…three days earlier, Chanda’s naked, ruined body had floated in the canal. A day later, they found Chander’s body in the wheat fields, with stab wounds. And that village erupted with stories galore about Chanda’s affair with the lower-class Chander and how they had to be made an example of, so that others wouldn’t stray!

Though Rukma had a hunch. She knew her Kuldeep had a hand in Chanda’s gruesome death. He must have definitely raped her and left her to rot in the canal.

A high pitched wail broke Rukma’s chain of thoughts. Kuldeep was back home and was beating up his sisters over a burnt roti.

“You want the same fate as Chanda, huh? Floating in the canals? You lazy bag of bones! Let me teach you a lesson!” Rukma ran to stop a raging Kuldeep.

“Kuldeep Beta, calm down. These wretches don’t know your taste. Let me make kheer for you. Two minutes.”

Kuldeep ate the kheer heartily and fell off into a deep slumber. The girls too found some corners to rest their backs.

Rukma woke up, tiptoed quietly, tapped on Chanda’s door and called out to Chanda’s mother. Chanda’s mother was about throttle her. Rukma signaled to an agitated Chanda’s mother to be quiet and gesticulated to the flummoxed woman to follow her. Together they dragged the very asleep Kuldeep, from Rukma’s house to the canal.

Rukma then gave a pick-axe to Chanda’s mother.

“I have fed him kheer laced with sedatives. He wouldn’t get up for a while now. Still, hurry up. Be gentle as I’m still the mother of this animal. Do forgive me. I cannot return your Chanda but can try and atone for his sins.” Rukma walked away with her head held high!

As Chanda’s mom chose to castrate Kuldeep rather than kill him, hoping for a lifelong reminder of his crime, a somber wintry sun began to rise over the distant horizon.

Editor’s Note: As a mother herself, the author felt compelled to write this story after reading about the recent spate of rapes and murders in Haryana. 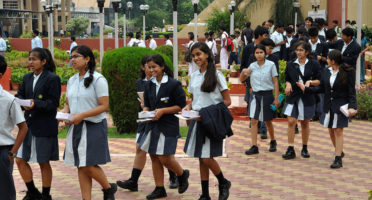