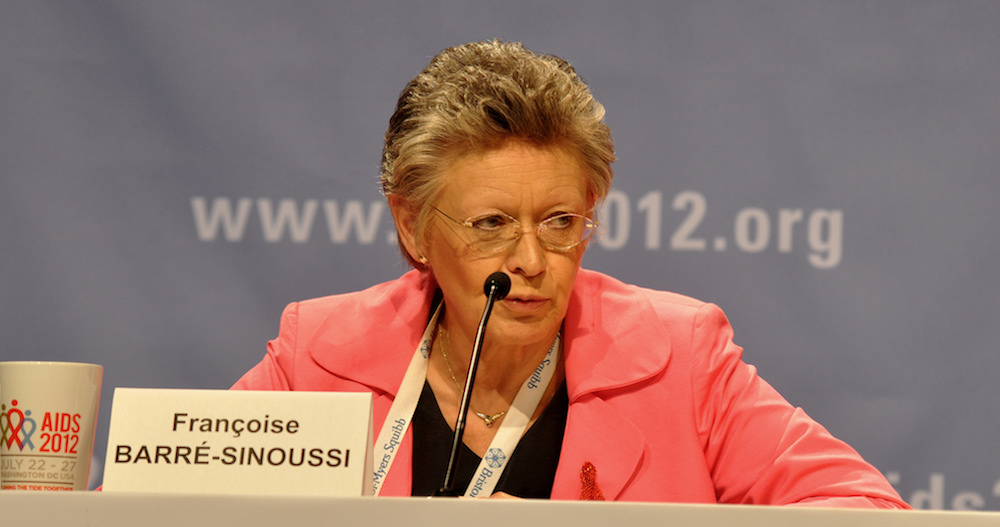 In the male dominated scientific milieu of the 80s, Francoise Barre-Sinousi discovered the AIDS virus HIV, paving the way for treatment of millions suffering from this deadly disease.

“Certain people – men, of course – discouraged me, saying [science] was not a good career for women. That pushed me even more to persevere” –Francoise Barre-Sinoussi, virologist and winner of the 2008 Nobel Prize in Physiology or Medicine.

During the fatal scourge of AIDS in the 80’s which unnerved the medical fraternity, a woman scientist Francoise Barre-Sinoussi discovered the virus causing this deadly disease. A Virologist, she was the recipient of the Nobel Prize in 2008 along with her mentor Sir Luc Montagnier for this amazing discovery.

Francoise Barre-Sinousi was a Phd scholar who interned with the U.S. National Institutes of Health. She was working as a Retrovirologist at the Pasteur Institute in Paris on infectious diseases when reports of deaths came flooding, describing an appalling illness with symptoms like severe fever, fatigue, and weight loss, common among homosexuals & prostitutes, causing an epidemic like situation. She was approached by scientists in the early 80s, requesting her to help them find what was causing this epidemic.

Reports THE GUARDIAN “Very rapidly while at university, as a young student at the time, I realized I was motivated by science, by biomedical science, without really knowing what that meant,” she said. “So after two years at university I said to myself, ‘I can’t study at university without knowing what it means to be a researcher, to understand science,’ and so I began looking for a lab that would accept me at the same time while I studied. It was very difficult.” Research labs were not used to this kind of approach by a student. They were male-dominated, and not used to having young, working-class women like Barré-Sinoussi in their midst. It was odd at the time, and she certainly met with a lot of resistance from the scientific community, but did not give up.

Her research looked at the various facets of the adaptive immune response to the contagious infection, the role of congenital immune defenses of the host in steering HIV/AIDS, and agents involved in mother-to-child transmission of HIV. She also researched on how to restrain HIV replication without antiretroviral drugs. She developed ART (Anti-Retroviral therapy) which people affected with HIV are in need of. The medicines need to be taken on a regular basis, else the disease steps up to stage 2, stage 3, stage 4 and then full blown AIDS. The higher the stages the costlier the medicines.

Francoise Barre-Sinousi was the president of the International Aids Society (IAS), the organization that ran the AIDS 2014 conference that took place in Melbourne. In 2015, she retired from the laboratory at Pasteur, where she and her mentor Luc Montagnier discovered HIV in 1983. That highly significant discovery revealed an urgent need for diagnostic tests to aid in controlling the spread of the disease, and allowed the development of treatments that now keep people with HIV alive.

Francoise Barre-Sinousi has contributed to several scientific publications, participated in international conferences, and has trained many young researchers on this deadly disease. She has actively donated to several scientific societies as well as to other AIDS organizations, like the National Agency for AIDS Research in France. At an international level, she is a consultant to the WHO and the UNAIDS-HIV.

Reported the AIDS Society Journal in 2009: “Despite the achievements thus far, we nevertheless still have over 60 million people affected by HIV and less than 5% of infected individuals in the world who need treatment are receiving therapies. Moreover, we face the continual challenges of finding a cure and developing an effective vaccine. The discovery of HIV only 2 years after the recognition of AIDS is a tribute to the advances made in research and the pioneer and dedicated work of DrsBarré-Sinoussi and Montagnier. We trust this appreciation by the Nobel Committee of HIV/AIDS as the most serious epidemic to have faced humankind will lead to continual efforts to bring a final end to this devastating public health challenge.”

But the fact stands unchanged; it was Francoise Barre-Sinoussi who helped society by her research, reducing the death toll caused by HIV. The deaths still continues, since the medications are costly, though the Government supports treatment by providing free medicines to patients at government hospitals.

On a personal front Barré-Sinoussi’s passion for science developed in her early childhood. Her science grades were good enough to make her classmates envious. Born in Paris she would love to bask in the sun and observe the beauty of the nature and every living thing.

She dedicated 30 years of her life researching on HIV/AIDS. In 2006, Francoise Barre-Sinoussi was inducted into the Women in Technology International Hall of Fame. We are indeed indebted to the woman who fought back patriarchal society, refused to stop her research, and made a breakthrough of this deadly curse called HIV/AIDS.

HIV/AIDS Is A ‘Gay Disease’: This, And 8 Such Myths About STDs Busted