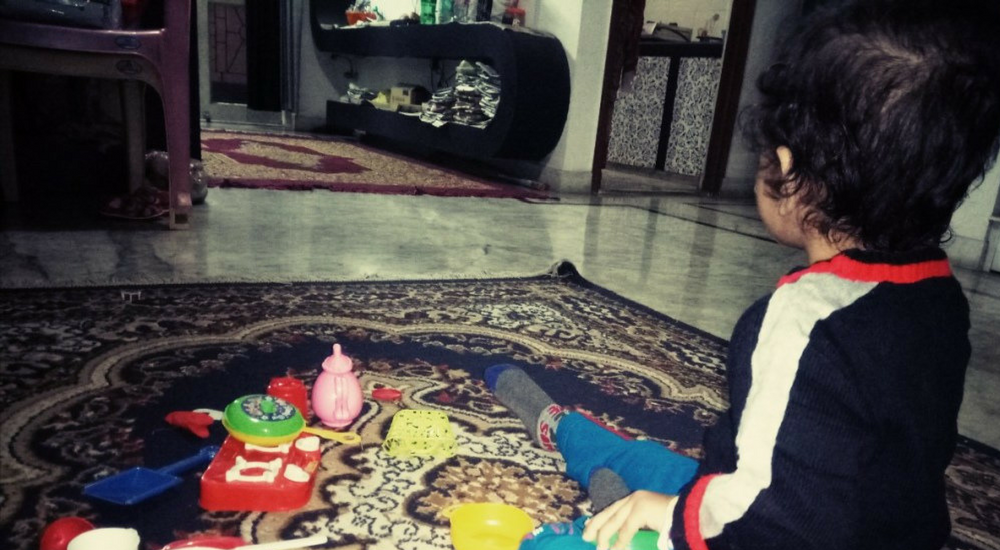 Breaking gender stereotypes is not always about grand gestures; sometimes, its as simple as who loves to cook at home and what your toddler plays with.

Last evening, my twenty-seven month toddler came asking for the ingredients to make chicken biriyani. He was pretend playing with his grandfather while I was busy with other chores. I was clueless about the answer. Despite my obsession with devouring biriyani at every possible opportunity, I couldn’t recollect ever making an attempt to cook it. Truth be told, I detest cooking. To put things into perspective, I actually hate the sight of kitchens except the time when I need to make my customized cup of sugary-milky coffee. I told him to check with his father after he returned home because his father definitely kept himself updated on the process of churning out delicious home cooked meals.

This conversation with my son sparked memories of my own childhood. Growing up in a small town, I got my first kitchen set as a gift on my fifth birthday. Until then, I preferred to play with the dolls, soft toys or crayons. With this new gift, I started pretend playing by emulating my mother’s actions in the kitchen. Soon I started borrowing rice grains, pulses and wheat flour from her to make imaginative dishes. Gradually I ended up collecting an assortment of kitchen items. Over the years, I accumulated a variety of toys and games, eventually losing interest in being the fancy kitchen queen.

I was around nine years when my father introduced me to the magical world of books. The book fair usually happened in the first week of January overlapping with my term exams scheduled soon after. Usually there would be multiple trips to the fair to purchase a maximum number of books only after an assurance from my side about reading them post exams. Ever since I discovered books , I rarely asked for toys. I was happy with my Satyajit Ray and Sunil Gangopadhyay. Around the same time, MTV India launched its channel in India. It opened my window to the world of English music. I spent my teenage years growing up amidst books and music until it was time to move to a bigger city for higher studies. Kitchen or cooking never featured as a topic in my life back home.

Survival in the first few years of hostel life was all about coffee and maggi. There were quite a few hostel mates who knew how to cook but I had neither the inclination nor the willingness to learn. My father would always give me a little extra pocket-money every month so that I could eat out once in a while. Moving three cities, I eventually landed up next with a job in Bangalore. Initially I took up a paying guest accommodation to ensure that my meals were taken care of. When I had a little savings, I shifted to a single roomed flat which also meant that I had to upgrade my skills to making tea and bread-omelette now. The nearest Andhra mess would have made huge profits in those one and a half years I stayed in Indiranagar.

I was in class six when my mother had to undergo surgery. She took a longer than usual time to recover and during this period, she struggled to cook for us in the heat. My father, always the caring and concerned husband immediately hired a cook. He never let my mother go back to the kitchen ever. We have always had help ever since and the only time my mother cooked was when I returned back home for my annual visits.

Six and a half years back, I got married into a joint family where the norm was that the kitchen was to be handled by the ladies. I had heard from my husband about how none of the family members ate food cooked by an outsider. Yet in the few days that I spent in my marital home before moving back to Mysore to join back work, my mother-in-law ensured that I was never asked to cook or help in the kitchen. Being the only male child in the family, my husband had been pampered to the core. He had never even entered the kitchen. When he moved out for pursuing medicine, he was the first in the family to recruit a cook at his flat in the new city.

By the union of marriage, two people with limited knowledge and nil interest about cooking formed a partnership. Initially, we hired a half maharastrian-half kannadiga cook. She turned out to be a good helper but had very little knowledge about making tasty food. Whenever I craved for something special, it would mean a visit to the restaurant. My husband grew tired of the tasteless food at home and restaurant outings. It had also started taking a toll on our health. So he took it upon himself to learn cooking. He figured out that the best way for an amateur was to follow the videos on YouTube. His professional commitments didn’t allow him much time to regularly experiment with cooking but whenever he entered the kitchen over the weekend, he created magic. Thus began a thrilling journey of discovering recipe and cuisines with my role as the official taster of all such outcomes.

Ever since we moved back to the city to be near our families, our hectic schedules rarely give my husband time to pursue his love for cooking. This year-end, we invited some close friends for lunch and after a gap of two years, my husband took up the responsibility of churning out a delicious meal. The chicken rezala and prawn malai curry from his oven could give stiff competition to any restaurant. What was even more endearing was to hear the men of the group bonding over their mutual love for cooking. I had comfortably chosen to play the role of serving the guests and savoring the food without an iota of guilt.

My toddler is amazed by the process of cooking. He has multiple questions directed to his paternal grandmother or our cook, related to the dishes. Whenever a family friend or relative visits us, he ensures that he shows them his grand kitchen set and pretends to serve them tea and biscuits. Quite a few times there have been people who have sarcastically commented on our flawed parenting technique of raising a boy. Despite his age, sometimes he has been mocked for his naive love of cooking instead of choosing a more masculine play activity. As a society we are so conditioned to shell out a set pattern of treatment reserved for boys and girls, that it annoys me to no extent to see how his innocent love for playing is labeled as a weakness. Not one to take things lying down, I retort saying that we have chosen to nurture the future master-chef.

In our house, I don’t cook simply because I choose not to. In our family, my husband cooks on special occasions whipping up a meal for close family and friends whenever he wishes to. In our kitchen, my son is fascinated with the way our cook goes about creating creatively delicious items because he loves them. We don’t have a set of rules to follow just because a few people around or the society excepts us to behave in a certain way. My parents raised me with the conviction that cooking needn’t be a woman’s job. Despite a conservative family background, my in-laws raised my husband to believe that entering a kitchen has no relationship with masculinity. As parents, we are trying to instill the belief in our toddler that he can develop his preferences devoid of any gender discrimination. In our own way, we try to break gender stereotyping everyday through our actions hoping that someday, not the gender but the skill set and expertise will be enough to decide our future.

Top image is the author’s own, of her toddler with his kitchen set

My Baba – My Feminist Hero, Who Broke Patriarchy, One Cup Of Tea At A Time