With its brutal portrayal of control over women's bodies, the movie 4 Months, 3 Weeks And 2 Days is disgusting, creepy, hideous, dark and terrifyingly disturbing. I saw the movie 4 Months, 3 Weeks And 2 Days on Saturday and I am still thinking about the movie. The brutal and to-the-point portrayal of control over women’s bodies is disgusting, creepy, hideous, dark and terrifyingly disturbing.

A woman’s ability to procreate has had a history of exploitation and is one of the major reasons for patriarchal oppression – at times, for continuing a race in a country and at other times, for continuing the family line. Cristian Mungiu’s cinematographically adventurous movie, 4 months, 3 weeks and 2 days (which won the #PalmeDor or Golden Palm at Cannes) brings to the fore the perils of having unprotected sex in a nation where abortions are illegal and can only be undertaken through the black market.

The story opens in 1987 Romania and the camera hovers over some mundane things, in silence, till the silence breaks its spell with a feebly fumbling Gabita, and her deep-breathing friend, Otilia. The two girls are in their dorm room, their body language clearly exhibiting some intense, stressful undertones. The viewer knows something is not right, but cannot point it out exactly. 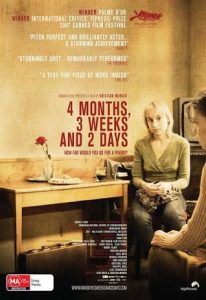 A few more humdrum things keeps happening – Otilia visits her boyfriend Adi, Adi invites Otilia for his mother’s birthday, but Otilia, with anguish written all over her face, says that she probably won’t be able to make it, annoying Adi (demonstrating the typical patriarch trying to control the other, not once trying to understand the matter with maturity). I am going to give it to Adi though. He does ask her what is wrong. When she says she will tell him later, he gets upset and insists on her meeting his mother because his mamma is making meringue for her. (Yeah right! Let the disturbed woman sulk, but my mamma made meringue so the woman needs to come, huh!) As Roger Ebert says in his review, he makes it a test of love, completely failing to comprehend anything else. This, I believe, set the tone of the movie for me. I realized I was going to see some more patriarchs trying to make the lives of the two women protagonists miserable.

Later, we see Otilia trying to book a hotel reservation (through the forever meandering gaze of the hotel staff who constantly make her feel like a criminal) and meeting a certain Mr. Bebe (You might want to think of him as an angel since he has agreed to conduct something illegal for the women, but one look at his mannerisms and you know there is something not right about him) and the plot, gradually, starts unfolding. Gabita is pregnant and Otilia has taken the onus of helping her friend out with an illegal abortion. The movie further shows us the harrowing account of these two 20-somethings trying to work their way out through the tyrannies of their nation.

The movie works on visuals. There is no explanation. There is no sound. The locales are macabre with dingy hotel rooms, bustling narrow lanes, grumbling automobiles – there is suspicion everywhere. Anamaria Marinca as Otilia has tension writ all over her appearance. She has held the whole movie on her shoulders. 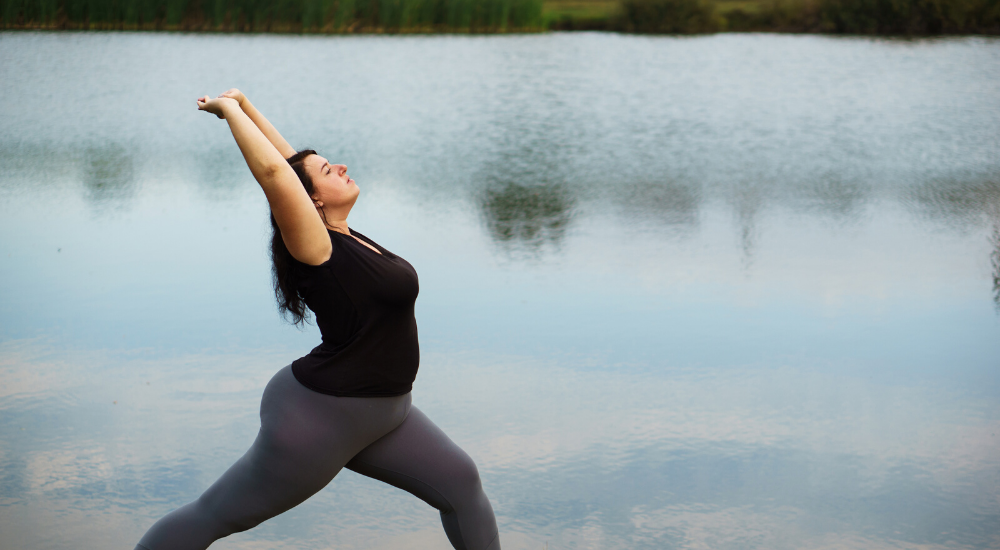 Gabita played by Laura Vasiliu, is clumsy, annoying and in spite of the precarious position she finds herself in, hardly takes any responsibility or control of the situation. The viewer wants to shout at her and make her aware of the death-trap she has trapped herself into, but then, her piteous eyes and wretchedly quivering body remind us that we are NOT in her position.

All the other characters have played well their parts of shoving themselves on the two women, suffocating them and in turn the viewers. The movie carries an oppressive air throughout. Some scenes are grippingly thriller’esque and one finds oneself holding one’s breath quite often in the second half when the movie catches pace.

A few months back, a man had tried to argue with me on a public forum, about how ‘slight changes in reproductive laws’ should not amount to collective paranoia. Anyone who has any doubts about the reasons for such paranoia should watch this movie. The grim fact that whether a woman is pregnant or not, eventually, is ONLY a woman’s problem, glares into your eyes and slaps you hard in the face. When you listen to the conversation between Adi and Otilia you’d know how troublesome not having complete control of your body is, especially when it entails carrying a human being inside your body for 9 months, with absolutely no security that the man who put it there in the first place would support you.

The ‘holier than thou’ might respond saying why would a woman get into a sexual relationship if it is such a hard thing, thereby making their own judgement about a woman’s sexual freedom, hardly looking at their own privileges. There is a reason why contraceptive measures have been introduced. One must also note that these ‘holier than thou’ are completely ignoring the factual statistics of rapes.

Romania, between 1967 to 1989, was the epitome of regression, repression and human rights abuses. Under the reign of Nicolae Ceaușescu, the Romanian government was considered the most Stalinist in Eastern Europe. The country at the time went through a period of some furious, harshest anti-abortion laws, thereby, making it the worst country for women. (From Wikipedia – in 1966, Ceaușescu, in an attempt to boost the country’s population, made abortion illegal and introduced Decree 770 to reverse the low birth rate and fertility rate. Mothers of at least five children would be entitled to significant benefits, while mothers of at least ten children were declared ‘heroine mothers’ by the Romanian state.) The only reason for this was supposed to be having more ‘subjects’ to rule.

A nation tells its daughters that smoking in front of elders is impolite (look closer and we see slut-shaming even in 2017), but allows its sons to be free. Yes, it is the same nation where getting pregnant before marriage is a blot on a woman’s soul (yes, you don’t have to look far away again) not on the man who is responsible for the sperm, or even getting into ‘tech’ as a career option is something not really ‘girly’ (vice versa for a man is not ‘manly’ enough), and the same nation where a man can release his semen inside a woman’s body while she screams at him not to do it because the result is for her to bear, not for the man. What happens to women in such countries, or even to the men who decide to say ‘NO’ to toxic masculinity, is deeply disconcerting.

4 months, 3 weeks and 2 days is a tale to be told and heard, especially since it comes from a country where the anti-abortion period witnessed several deaths of women due to infections caught during illegal abortions. Bearing a child in one’s womb has some lethal health repercussions and hence the ones who do not have to go through it, can at the least just shut up and stay out of it.

View All
No More Guilt: Exploring The Ways In Which You Can Shed Mother's Guilt
Steps To Landing Your First Writing Job - Want To Be A Content Writer?
What Are The Essentials Of Being A Good Content Writer?
Women At VMware - Meet Ipsita, Inside Sales Representative At VMware India
Women of VMware - Meet Afifa Hasan, Enterprise Sales Account Manager for VMware India
Women Of VMware - Veena Chandrashekar, Director, Inside Sales Practice
Sports

The signpost read 200m to the finish line. It felt like the sweetest message ever! Charged by that message, I ran a little faster than I was running, to cross the finish line of my first full marathon.

A designated break from being a mother, an interlude from the habitual chaos at home, a weekly reward of brief solitude I give to myself. Sometimes though, a ripple of thought upsets the tranquility, awakening an inner conflict, making it hard to be at peace even at a place where silence dominates.

My volunteer work at the library is purely out of love for books. Week after week, I look forward to spending those 2 hours in the world of paper and ink, characters and stories, color and print.  Most Wednesdays, those 2 hours go by in methodical sorting and shelving of children’s books and in near silence. Once in a while someone comes looking for a specific genre or author and I point out the right direction. The highlight of my day is when a patron comes up and says thank you for taking time out for the community.  Makes me feel like even the little bit of effort that I take every week, doesn’t go unnoticed. Those rare intrusions make my day. END_OF_DOCUMENT_TOKEN_TO_BE_REPLACED