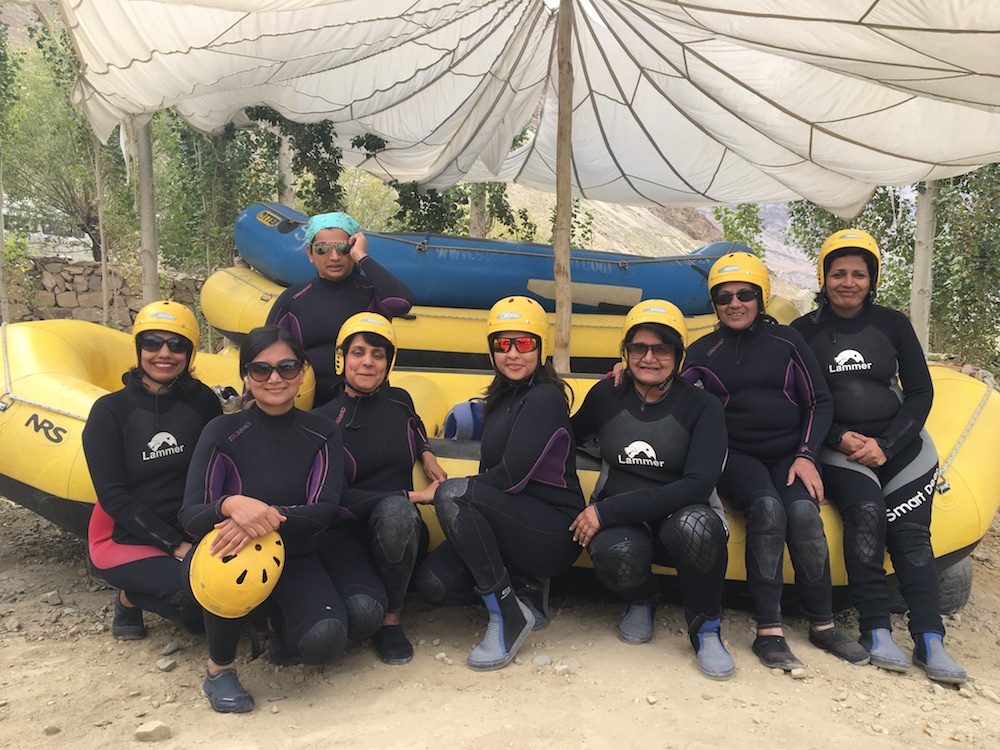 The story of my adventure of white water rafting on the Indus River with a daredevil all women crew, where I had gone on a tour with F5Escapes.

Guys, let me first complete my exclamation and elation over having seen the Indus Valley River with my own two peepers! Like really what can even come close to having seen this bountiful river which was the cradle of India and the biggest reason that we Indians have such a diverse culture.

The river which provided for an amazing and advanced civilization named after the river itself. The civilization that had granaries and paved roads which lets us feel superior to what Europe was up to around then, which was pretty much nothing! 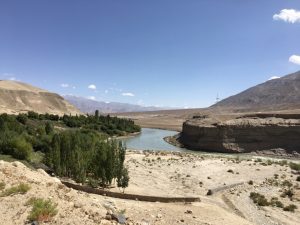 The Indus river today flows in from China from the Himalayan ranges through Jammu & Kashmir to flow out into the plains of Pakistan. Ever since I studied about the Harappan civilization in my history textbooks I have been itching to follow the Indus river to the sites it spawned. After visiting Lothal a few years back being on this cold blue river was an amazing experience for me.

Well, not only did I see the river flowing across the Ladakh desert cutting ravines as old as time, I river rafted on it. Well, technically the rafting was done on the Zanskar which is a major tributary of the Indus river. But the rafting expedition ended at the confluence of the Zanskar with the Indus river. Zanskar is a glacial river which freezes over in the winter and makes the world’s highest rafting spot when the river is flowing. The rafting was done over 14 kms of this cold, adventurous river as it cut across jagged rocks and ravines of various hues. 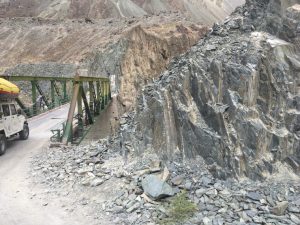 A bridge across the Zanskar, climbing up the river to raft down rapids.

This trip was an all women’s trip to Ladakh by F5Escapes. Usually, I detest group tours but having traveled with F5Escapes before, I knew that what they would offer will be different from the usual tourist traps. At Leh I met these extraordinary 8 women who were going to experience mountain sickness, absolute beauty, adventure and pure abandon along with me for 10 days, but more on this later. Our ages ranged from 30 to 60 but most everyone felt not a day older than 21 possibly. 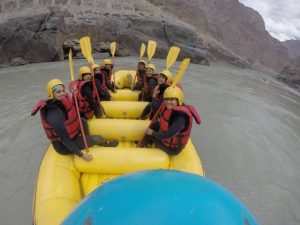 The daredevil all women crew

We reached the adventure camp that September as the season in Ladakh was winding up as snow arrived in the mountains, in the van that we had called home for the entire trip. We were given wetsuits and the promise of a good lunch at the end of the expedition. We wore the wetsuits with slight trepidation in our heart and boarded the van once again. Our rafts and gear were loaded onto another truck which we were to follow. The truck started climbing up the mountain road until the river came into view in the deep ravine below. We crossed bridges and the truck continued its ascent through pink, blue and grey mountains of pure rock and gravel. One thing was sure that if we fell into the cold water at least we would do so while enjoying an amazing view. 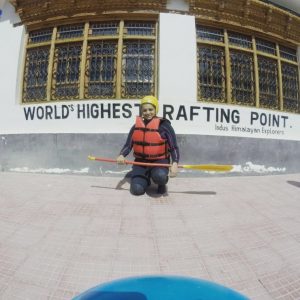 The rafting instructor aka the guy who we had entrusted our lives to, gave us a short class on rafting, what to do if you fall in the water, how to hold the kayak, how to hold the lifeline and some other pointers. So with life jackets and oars, we boarded the raft to be greeted by rapids, still water, extravagant rock formations and a history that flowed from a glacier 20 km away. We had some adventures along the way such as two girls falling into the water from another raft which had started with us: we were the Carpathia to their Titanic. We also had an impromptu performance of Madhuri Dixit’s sexiest dance while on board the raft. 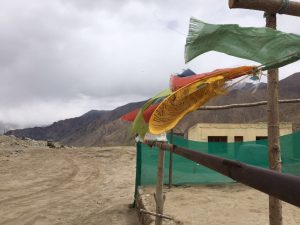 When we arrived at the confluence and marveled at what we had just achieved, we had folks asking us if we were from the Navy, duh! Some folks whom I overheard from afar mused that we must be Ladakhi. Well, we were neither, we were regular Janes who did not listen to dictats of what women should do or shouldn’t do!