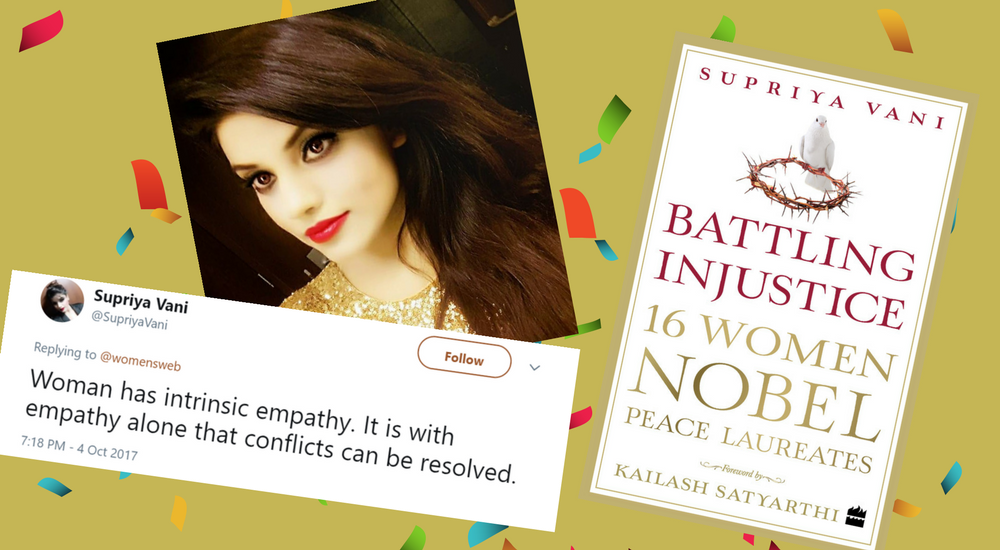 Gender stereotypes and injustices that women face are often the results of deep-seated patriarchal norms and stereotypes that have come down through generations. These archaic norms are not limited to a particular country or religion or tribe. In fact, women all over the world face gender stereotypes in some form or the other.

However, times have changed and in the new world order, women play a pivotal role in shaping countries, societies and economies. Not only this, women across the globe are playing a prominent role as advocates for peace-building and security, both for women and men.

Supriya Vani is a twenty-eight-year-old international journalist and peace activist. In her book Battling Injustice, Vani has interviewed 16 women Nobel peace prize winners – these are women who have rewritten history, battled against all odds, fought social and gender discrimination and championed the cause of peace and justice.

Through this book, Supriya Vani aims to inspire women and encourage more of us to participate in peace-building initiatives in our own ways. In the words of His Holiness Dalai Lama, “The lives of the women Nobel Peace laureates detailed in this book by Supriya Vani are clear evidence of my belief that women are naturally more sensitive to others’ needs and well-being. They have greater potential for expressing love and affection. Therefore, when, as now, compassionate leadership is required, women should take on a greater role in making this world a better place for all.”

On the weekly #WomenOnTheMove Twitter chat by Women’s Web, Supriya Vani came on board as a special guest, talking what prompted her to write Battling Injustice and what she aspires to achieve through this book. Readers chimed in on their thoughts on women as change-makers.

How Battling Injustice came about

On her motivations for writing the book, Vani says:

Another important reason that prompted her to write the book was her desire to inspire people to work for peace.

She then took questions from Twitterati and shared her thoughts on women leaders who are often perceived as weak.

No. Violence is considered sign of power. Women leaders are often under pressure to prove they are strong, so they do resort to violence https://t.co/UZrqX5DAUV

I don’t think women leaders are weak, I mean, look at Angela Merkel- she is such a successful world leader.

While all the stories are must reads, here are some of Supriya’s favorites.

@Malala and mother of Arab Spring @TawakkolKarman are beautiful pieces of my heart.

The world, we live in, is increasingly becoming dangerous and violent. Reports of dangerous crimes committed against humanity dominate world news. The increasing incidences of violence and crime often make us wonder – is violence gender specific? The responses we got seem to suggest that many don’t believe so, although data does suggest that women and children form the larger proportion when it comes to facing violence.

A-2 ) Violence is not a matter of gender but state of mind.. So probably it have not mattered much #womenothemove

Rightly said. Its a mindset issue not a gender issue at all.

No, violence is gender neutral, there a tinge of delinquency in violence

According to a UN report, only 4% of signatories to peace agreements were women. The report also reveals that in peacekeeping missions and domestic security services, women have been massively underrepresented worldwide. So, leaders around the world have been advocating for greater female representation. They say women representation becomes crucial in the negotiating table because women have a greater understanding of the social framework. Hence, they address the societal needs rather than solely focusing on what will make the warring parties happy.  Here’s what Supriya Vani had to say:

In our Indian culture a woman is venerated as Goddess and they should actively participate in all the legal, political @social issues.

And our reader’s thoughts:

raise your son for bringing peace in work he does or while resolving issues do we women keep empathy in mind or just fight https://t.co/XIjaTi0B5l

Role models to look up to!

Life is full of problems and challenges. To overcome them we have to become aware of our strengths – determination, persistence, resilience, courage and a positive mental attitude. Enter the role models who motivate and inspire us by their qualities, traits, stories and how they faced challenges and emerged victorious.

It really depends on the content of one’s character . @MichelleObama is my role model chief

I’ve been inspired by Saalumarada Thijmmakka who planted so many trees in K’taka and nurtured them like her children #WomenOnTheMove https://t.co/L4nOxJWYvg

@editorsahiba @womensweb thats amazing ! Ecofeminism is so needed by our world @MargaretAtwood are you listening ?

1- Medha patkar …She is the women of substance behind narmada bacho andolan ..Mahatma Gandhi of modern times #womenonthemove

It is time for the patriarchal norms and gender cliches to go, and go for good. Change is slow but change is inevitable. From basic suffrage to women being chosen to positions of power, change has never come easy to women and it won’t in future too. It will demand sacrifices, persistence, and unity. We need to be wary of the forces out there that will try to break us apart, but ladies, staying together and fighting together is the only way forward.