Meet Nisha Rao who accomplished a wonderful ride from Kashmir to Kanyakumari (3959kms) on a gearless Honda Activa scooter in a record 130 hours.

Since her school days Nisha Rao says she always cherished a love for trekking. From then, she started taking part in trekking competitions and eventually also won some trekking events. But as it happens with many of us, as we grow up and settle down with jobs, our hobbies seem to get sidelined. The same happened with Nisha. With the passage of time, she had to reduce her trekking activities, but did not let go entirely of the adventurous spirit within her. In Nisha’s words, “Kuch alag karna tha”. (I always wanted to do something different).

Many of us enjoy taking long drives. So, does Nisha Rao. But, have you ever driven your car from Pune to Leh? I am sure not. Back in 2015, Nisha Rao travelled by car from Pune to the highest plateau region of India – Ladakh.  Behind such a rigorous endeavour lay months of practice, especially on Saturdays and Sundays due to the fact that Nisha happens to be a working woman. Currently, she is working at the Principal Financial Group as Sr.Lead Finance, MIS & Treasury. Finally, after turning 31, Nisha decided to undertake a ride of a different kind – this time, across the country on a scooter.

Nisha Rao’s fastest north to south expedition as a woman rider is one of a kind, but such dreams don’t come true with the blink of an eye. She says that currently no such record is present on the Limca Book of Records or other noted record books. Nisha reveals that she was preparing for this Kashmir to Kanyakumari expedition for over a year. She practised on curvy roads and highways such as Pune-Sholapur and Bombay-Bangalore, even during the monsoon season to get herself accustomed to all types of roads and weather conditions. From purchasing a new vehicle to finding suitable jackets, helmets, and other necessities, she had to prepare extensively to make this self-funded expedition a success.

Cutting across eleven states and one union territory, she rode her Activa from Kashmir to Kanyakumari, passing some of the toughest terrain in the world. Temperatures ranging from 4 to 40 degrees celsius, from almost no roads to excellent highways, through scorching sunny weather to heavy rains, the journey threw all kinds of extreme conditions at her.

Behind every man’s success there is always a woman. That’s what we have all grown up hearing. This success story is different from the rest. Behind Nisha Rao’s outstanding completion of an expedition that no other woman attempted before are two men she credits – HV Kumar and Balaji Mohan. The two men were not only an inspiration to Nisha but also played the role of her mentors. Referred to as the ‘Human GPS of India’, HV Kumar is an avid traveller who has travelled to every nook and corner of the nation by road. He helped her to chalk out the route of her journey and also advised her to practice on certain roads and highways before heading for the journey.

“HV Kumar Sir was the first person to believe in my dream and gave me confidence to take up this adventure. I had visited him so many times for discussing various things about this ride and he happily gave his precious time and shared all his experiences and knowledge,” says an ecstatic Nisha Rao over the telephone. On the other hand, Balaji Mohan is the fastest rider in the world to travel from Leh to Kanyakumari in a little over 61 hours. His blog posts came in as immense aid and she also got in touch with him through Facebook.

Talking to her about the tough drive, she narrates a few anecdotes. On the journey, when she was passing by Agra and Jhansi regions, people used to stare at her and some did not even bother to give her space on the road, whereas in the Ladakh region, the passersby, including military trucks, were highly encouraging. Although she had trained herself to solve simple mechanical problems with the scooter, and also carried a kit along, luckily, there was no trouble with the Honda Activa during the journey.

When you are driving for 15-16 hours, especially on highways, maintaining your focus is the most critical element. Nisha says that to keep herself energised, she used to munch on dry fruits, watch the milestones left, and sing songs to herself. Nisha Rao adds, “It was HV Kumar Sir’s advice to start the ride from Leh and cover the toughest terrains first which really helped to achieve my target. He also advised me on how to tackle dry weather conditions and altitude sickness which really did the trick and I completed the journey without any health issues.”

You must be wondering whether there was any moment where she wanted to give up. Hence, I too had asked her the same question during the interview. However Nisha says that for her, it was the other way round. Instead of getting demotivated, the milestone boards on the highways encouraged her in a way that only this distance was left between her and the final destination. She could see her victory ahead clearly. Her family and friends were also supportive in this endeavour of hers. Made it to Kanyakumari!

In the near future, Nisha is planning to take up the endeavour of completing the Golden Quadrilateral highway network connecting Chennai, Kolkata, Delhi and Mumbai on a gearless scooter. Clearly, the end is not here for her yet.

Nisha Rao has a message for every woman, “A woman can do wonders when she gets proper exposure and support. Many times in routine life of office and household, women tend to compromise on their passions and hobbies. My message to them is never let go of your hobbies and passions. These keep you motivated in life and also give that feeling of being special and confident. That, yes, I can do something different. It also earns you respect in the community.”

All images belong to Nisha Rao 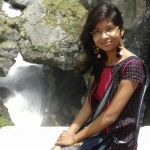 Why Is Name Change A Must After Marriage? She Has Her Own