How I Reached For My Dreams And Refused To Let Go

Are you the ‘average girl’? Well, deep inside every average girl is the potential for more, says author Deesha Sangani in her new novel, She Dared To Dream Through Her Eyes. 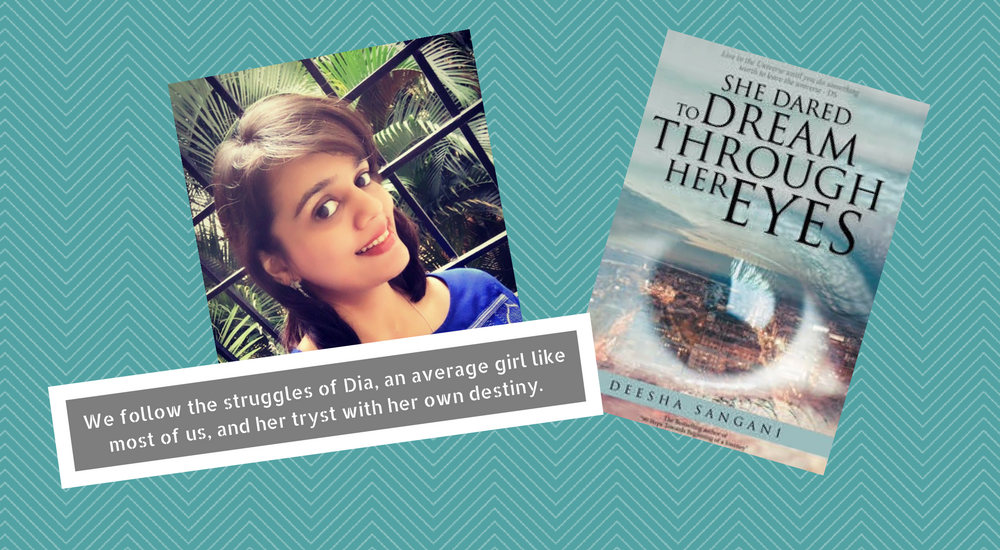 Are you the ‘average girl’? Well, deep inside every average girl is the potential for more, says author Deesha Sangani in her new novel, She Dared To Dream Through Her Eyes.

You know what they say about snowballs and avalanches…how the smallest act can trigger something on a massive scale. Well, an important revelation about my own self came to me in this way.

It all started with a Facebook post…a post that went viral! What I had written to merely voice my opinion on a subject I felt strongly about ended up becoming ‘the’ opinion instead. When I saw the shares piling up, I realized something that had always been gnawing at the back of my brain since forever. Writing was my calling, no matter how deep I had buried it beneath the layers of my life.

But hey, it was never too late to start!

So why had the dream died? It’s because there never was a dream in the first place. Being an ‘average’ girl from an ‘average’ family, everything about my life had been conventional and thought through.

In fact, the latest Deesha Sangani book on the stands She Dared To Dream Through Her Eyes talks about this very ‘average girl’. A girl who could be any one of us. A girl who refused to give up in spite of the difficulties life threw at her and was determined to make her dreams count. There are many of us who just let go off our dreams, leaving them to die a painless death.

I said ‘painless’, because it’s not a sad story at all, and not an impassioned rant against my life. I have had a wonderful life. So what had the Facebook post triggered? Even after everything that I had, why was I suddenly unable to make peace with so much peace in my life?

A toddler and a newborn can be quite a handful to manage. But, you get used to these beings in your personal space and they become a part of your life. At this time, with no job, you come back to a time when you have absolute freedom to pursue whatever you want to. And therein lay the problem. I was suddenly staring at a steep wall with no idea of how to climb over it. It is then that you start having conversations with yourself, a concept that I again found in the above-mentioned book!

At this stage of life, I also met many women who were satisfied playing the role of the ‘anchor’ of the family. And then there were others who were working 9 to 5 and expressing their guilt over not being able to spend enough time with their family. But whatever else my doubts, I was at least sure that neither option was for me.

As a woman brought up in a progressive household, I could not come to terms with the issues of basic survival that women from poorer sections of society had to contend with. Somewhere a new page of life was turning, one that spoke of more than KPIs or children’s admissions. One day our maid overheard our conversation and casually spoke of how her philandering husband thrashed her almost every night. The manner in which she meekly accepted her fate angered me no end. She could not dream of any action being taken against ‘her man’. Somehow that frustration found its way to the keys of my laptop. And the words wrote themselves.

That was my Eureka moment, and as I stared at the words, I realized what had been missing in my life all this while.

Inspiration came in many ways!

I was suddenly doing more work than I ever had before, and enjoying each second of it. There were people who thought that I was wasting my education, but this time I knew where my dreams lay, and I could successfully argue the case for my passion. This time, I would not let go!

I realized that the passion and a smidgen of talent had always been there. It was time to clear the cobwebs and polish the brass!

On this journey, I met many bloggers and writers who also pursued their dreams and achieved a lot in life. One such influential author for me was Deesha Sangani. Her book 90 Steps Towards Beginning of a Journey very realistically addressed the situation that many of us face – the problem of stepping out of your comfort zone, the apprehension of crossing the many hurdles that lie ahead and being able to manage your life along with your passion. Her writing always came across as pragmatic and close to life.

With her second book, She Dared to Dream Through Her Eyes, she has shifted the narrative to fiction where we follow the struggles of Dia, an average girl like most of us, and her tryst with her own destiny. She makes a very poignant point that there is a purpose for your existence in the universe, you just have to find it and happiness will follow.

In this age of distractions, if you can focus, there is nothing that can stop you from finding this purpose, much like Dia, the ‘average girl’ in the book.