Women have been silenced through ages because patriarchy has dreaded women who know and speak their minds. Not anymore! #WomenOnTheMove 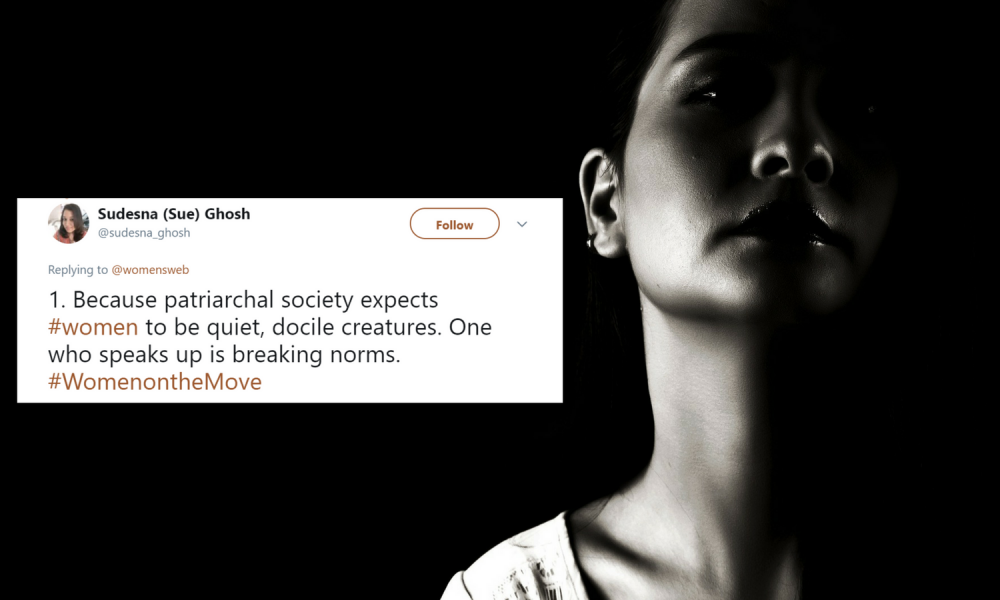 Women have been silenced through ages because patriarchy has dreaded women who know and speak their minds. Not anymore! #WomenOnTheMove

Silence is golden — as the popular adage goes. From what I know and have read, silences can be categorised into different sorts — there is the comfortable silence — like when you are driving down on meandering roads with the music set to your taste just in the right volume and your best friend sitting beside you. It is the thankful silence that you share with a person whose presence has more meaning than words.

Then there is the respectful silence — like when you set foot on the vast perimeters of the concentration camps in Auschwitz — the sheer scale of sufferings and death that place has witnessed suddenly hits you hard and you can’t help but stand there in silence and be in the moment. Probably send a prayer up to the heavens seeking peace in the world and remembering the people who lost their lives in the most brutal way possible.

And then there is the silence of the unsaid, the unspoken and the repressed. The voice that has been deliberately crushed; an imposed silence. When words seem risky and dangerous, silence is an imposed choice.

In our weekly #WomenOnTheMove chat over at Twitter, we discussed how over the years women have been constantly silenced because the proponents of patriarchy feel threatened the moment women raise their voice and want to be heard. This is what #WomenOnTheMove said. (If you’re not yet following Women’s Web on Twitter, do now, and you can come over for the chat too, every Wednesday 6-7 pm IST).

The role of patriarchy in silencing women

Since ages women have been on the receiving end of the stick; suffering in silence. The have been constantly bombarded with the analogy that being silent is the characteristic of ‘good girls’.

Women should be good listeners

Also, cause for years women have been considered to be the “weaker sex”…who are only supposed to follow instructions and not voice opinion

Men are the leaders

Gender bias as always. Men are “supposed” to lead. No matter how many stereotypes have been shattered, men will be men. #WomenOnTheMove

Women should not have opinions

Lack of a strong female voice

The reasons can be diverse. Patriarchal families with no strong female voice, lack of female companions while growing up..

But the world moved on and the rules changed. Women got educated, found jobs, had an opinion and did not shrug to voice them — loud and clear. That is when patriarchy and its proponents felt threatened. Reasons being:

Patriarchy was the undisputed leader until now

It’s because of the unwritten rules set by our ancestors, which nobody challenged until the last decade probably. #WomenontheMove

The domains that were primarily male suddenly were infringed upon

Oh yes and especially on matters that are not supposed to be in our realm like politics , sports #womenonthemove

It is a myth that patriarchy only affects women, patriarchy affects men too. Regressive tropes like ‘boys don’t cry’, ‘boys don’t cook’ etc are the fruits of patriarchy passed down through generations. If our boys don’t see, they don’t know, so they don’t learn. As the country grapples with the increased incidences of rapes, acid attacks, sexual assault, dowry deaths etc, it is probably time to indulge in some serious introspection. It is time to change the normal.

In the zest of raising strong daughters, as parents we often forget to talk to our sons. Our biased attitude is not only unfair for our daughters it is unfair for our sons too. It is difficult to let go of the social conditioning we have been raised in, but it is not impossible.

A2 Fearless daughter is one thing. You need to raise sons right too, and that usually happens when you set right examples.#WomenOntheMove https://t.co/8DkUJfRrqo