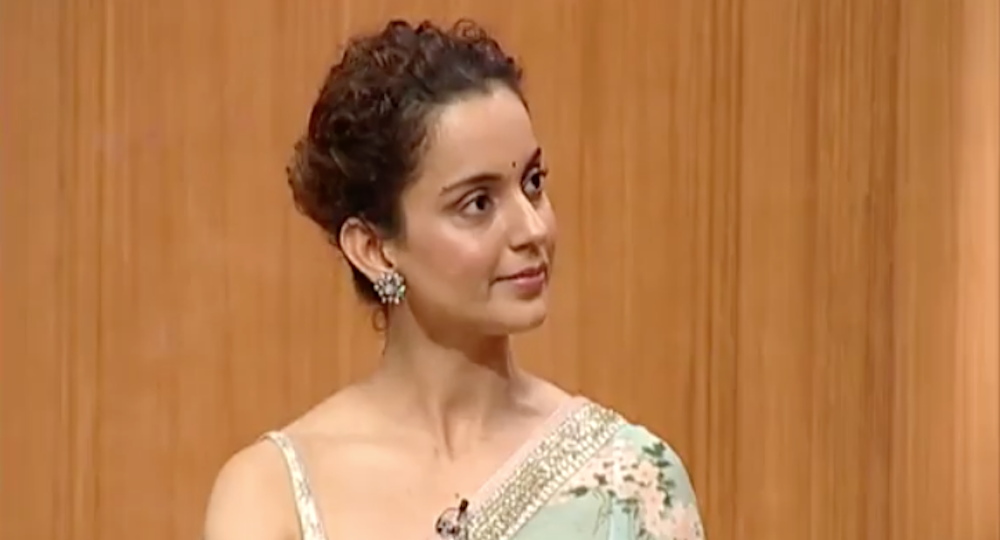 If you want to hold your breath this week and suck in the air with the sheer gumption of it, watch the ‘One Woman Army‘ called Kangana Ranaut on Aap Ki Adalat  with Rajat Sharma.

Kangana Ranaut has redefined what brazen Courage is made up of. Other guests that appear henceforth will have to match up to the sheer audacity and honesty she brought to this no-holds-barred interview.

This is how such shows should unfold instead of the diplomatically correct and politically ingratiating words that tepidly fall in a pakau manner by some of them who do appear on this show. She has earned her fearlessness by plunging into the depths of misery and truly asking, “What do I have to lose anyways?”

Before I launch into a full fledged love letter to this lady, let me admit to a memory that reminded me about the spark I had lost long, long ago.

I remember being asked to resign from a well-known educational institute simply because I had refused to find carpenters for doing up the reception area of the school. Being a counsellor, I thought it was definitely not a part of my skill set nor job requirements. It was appalling to see even senior well-qualified counsellors on board bring them quotations from carpenters and deriving pride that theirs was considered. I refused politely but firmly, earning me the wrath of the principal and HR! They told me to resign or else they would not give me a good work experience certificate and it would ruin my career.

I needed the job, yes, but more so, my self-esteem was at stake here. I was rated the best Counsellor in their yearly assessments and yet I was an eyesore for them. I had not complied with their unruly demands and they had the power.

Well, I dug in my heels and refused to resign too. I did tell them, “My career is my responsibility alone” and that they should make the rudest possible termination letter ever but I shall not resign.

Phone calls went back and forth, explanations and arm twisting followed but I stood there without budging. I had the power of the truth with me and so it was. They had to find a clause that since I was on temporary placement, they no longer needed my services and they did give me a work experience letter, describing the period of my term too. I have never used that experience letter ever. I did decide to chart out my own life on my terms and conditions and have a rollicking career as a teacher, blogger (my book made it to the Limca Book of Records), spiritual healer and just an independent human being who no longer puts her destiny in the hands of insecure, so-called powerful people.

So with lots of awe in my heart and fierce glee, I watched Kangana dissect, devastate and destroy the Bollywood film industry’s ways and narrate all of that she went through. She choked, she sobbed on a few words. The eyes were raw with agony yet glinted with steel. I will not break now or ever, is what they said.

What is she made up of?

To look at her flimsy frame, she appears so dainty at all of her 49 kgs. There is no bragging on her part. She accepts her frailties as easily as she flings logic at the people who set out to destroy her. She accepts that she was in love with Hrithik Roshan and it was so deep while it lasted but when he intended to close the chapter, she did. She expressed her hurt that he made public the most intimate details of their times in his bid to hurt and humiliate.

She had all the silent anger at the writer and actor couple who threatened her with dire circumstances. I am sure they squirm in their plush sofas where they look at the delicate girl they intimidated. She did not once deny that she was not affected, not humiliated! She accepted all of it and put it raw out there for all to judge or indulge. She has a wise philosophy too that, “If my family or society is ruffled and hurt, It is ok for the time being. I will take it.”

Life has not been a cakewalk for her. She admits it and nonchalantly takes it in her stride. She accepts her vulnerable part that is loved and believed. She also does not hesitate to express the indignity she was put through at having her privacy invaded and family put through trauma. She sums it up so indignantly, “If they put me, a successful actress through so much, imagine what they must be doing to girls with no clout or support?”

She met allegations head on elucidating her contribution and absolving what was not her piece of pie.

She cooked up a storm that she did want to marry Hrithik Roshan and in his indecisiveness lost her ‘other offers’. “I’m 30 and unmarried“, she gleefully and remorselessly throws in for the audience to clap on.

You would not expect this from actors like Alia Bhatt or Sonam Kapoor or Shraddha Kapoor, who being star kids are trained to drip artificial diplomacy. Their interviews are drab and induce headaches. In Kangana’s words, ‘pakau’.

I loved her quick dismissal of the case Hrithik filed as a ‘pakau case’ even for the police. On hindsight, he did have the option to block and report instead of receiving 1000+ mails of unwanted attention.

She waves Karan Johar’s blog as ‘waahiyat’ (absurdity) which he wrote post the showdown on his own show. She simply shrugs her ‘nepotism’ remarks as counter observations to Karan’s observations on her ‘private low key social appearances’. It is too true, that man could not take an opinion for an opinion. His efforts at ridiculing her at an award show only lowered his image and reputation. Even his sycophants are left helpless in the torrential criticism they get post participation in such nefarious activities.

Still, Kangana is a true lady. Throughout the show, she called Karan’s blog and ideologies ‘waahiyat’ but she did not use the ‘below the belt’ rude recourse to his sexuality to hurt or humiliate him. Everyone seems to be too eager to hit out at Karan where it will hurt the most, not Kangana. She is a Fair Foe! She stuck to her stance of not wanting a chance in his films with Ungli, saying “…where I have only a ten minutes role is the worst film of my career! I don’t want to be cast in his films” Candid, with dollops of self-deprecating humour.

She rips apart the award functions as the ‘biggest fraud’ and cheekily asks people to refrain from watching them. She elaborates happily how that whole thing is a sham and how awards are exchanged for performances to avoid costs.

She admits to her climb upwards through Queen and Tanu weds Manu which probably gave her the lifeboat to swim in choppy waters such as these when you know people are out to put you in jail and have the support of money and power. (Kangana also alleges that even agencies such as the women’s commission were unhelpful).

She has dealt with abuse, betrayal, deceit, intimidation, humiliation and public scandal with even a non-celebrity actor’s claim of black magic!

Her inimitable logic cannot be overlooked when she asks, “Black Magic on him??? Who or why would anyone?”

Too true! All point to attempts at defaming a young girl who will not submit to your unruly attempts. An attempt to subjugate a spirit that cannot be tamed with threats.

Today is her time, and she is getting her own back. She stands vindicated and redeemed. She does not need to justify but yet offers an educational glimpse of a rotten system she has been plummeted into and emerged victorious. Wounded, scarred, yes, but not surrendering.

For all of this, she remains a grounded woman when she responds to a query of where she gets her fearlessness from! Why she is not on social media? She admits her lack of ability to deal with so many comments, opinions and people simultaneously. She is a ‘One-on-One or One-on-few-people interactions’ kind of person.

She simply puts it: “Ask – what you will have to lose anyways?”

Her wisdom springs from fighting the pressure from her family to facing the threat to her family, to being blamed for the unrest to dealing with pleas of ending it all by giving in. She has overcome her inner conflicts and demons and put forth a simple paradigm.

Hang in there with your talent, stand firm on your terra firma. Truth will reign.

Her truth certainly shines and so do her eyes. They still have the painful acceptance that life is one long battle, inside and outside. Her naive hopes of being loved wholeheartedly are mercilessly crashed. Her thousand dreams of a cozy life mauled. She declares her painful depression and conquest too.

Does she ignite pity in you?

Nope, only wow and awe.

Her simplicity tugs at my heart strings and my patriotic self smiles when she asserts, “I do not want Oscars. I am too content getting an award from my Honourable President!”

She stole my heart and earned my respect with that graceful conclusion that her sights have pretty boundaries set and she means them.

Henceforth when she speaks, the world will listen and trust for she subscribes to the fearless tribe of women who look the world in the eye and say gently, “Do thy worst and I shall still prevail…!”

Top image is a screen grab from the episode

Kangana Is Becoming The Poster Girl For Everything She Stood Against, And That Is Just Sad