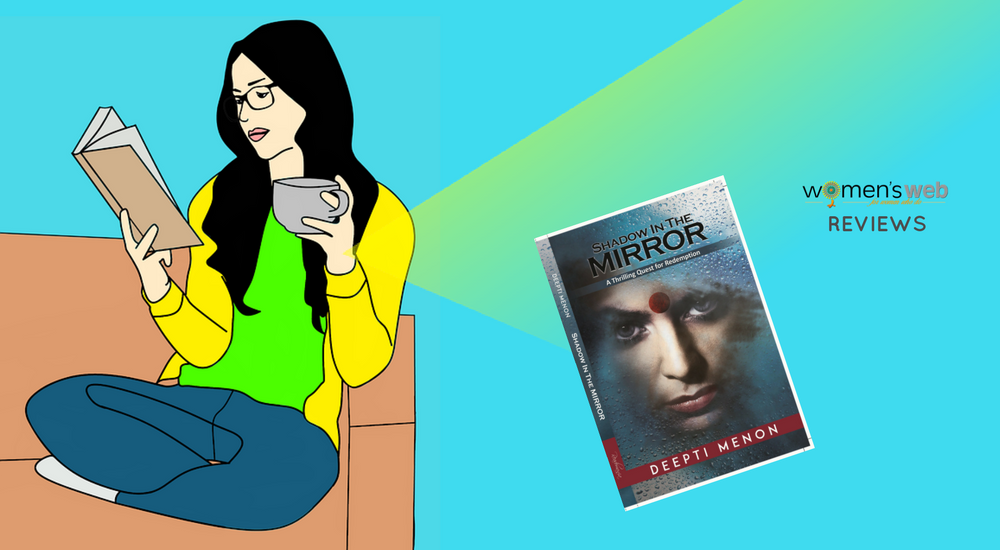 Shadow in the Mirror by Deepti Menon is a fast paced whodunit with fiercely feminist women characters that is a must read for any lover of this genre.

A quaint musing in English that is reminiscent of Jane Austen meets an everyday Indian family when it’s bang in the middle of turmoil. Deepti Menon’s debut novel is a powerful tale that holds you from the moment the narrative begins. A racy beginning takes you through a pregnant woman, Nita, falling off her balcony, and the taut pace holds on without faltering even for a second, up to the end where the truth is revealed. It is a stunning tapestry of intricately flawed characters playing in and out in their pursuit of the truth.

A death is like a stone in the river: leading to many ripples that affect the lives of all those around. And that impact is doubled up when the death smacks of some foul play, something fishy. So, Nita’s father, her upset husband Krish and a young journalist, Vinny, are all brought into the mix to knock on the doors of the story, to find out what went askew where.

What works tremendously well are Deepti’s sub plots and stories, the back and forth and the meandering between eras, the clash of ideas and beliefs as worlds wind up taking on one another and the way these things impact each of the characters are amazing. Nita remains an enduring character – even though she is the one loose thread that brings the entire fabric down as it’s pulled and tugged at, she is a very unifying and very moving presence throughout the book, and you find yourself falling for the charm that she exuded in her lifetime, albeit told through the eyes of many people. Deepti’s essays of each character, Vinny, Kavita, Roma, Krish, come with a certain depth and comprehensive understanding of the many ways in which a human being functions, thinks and acts.

And yet, you also notice that Nita is not beatified in the way that most killed-off or dead characters are: you see her come alive with her flaws and misgivings intact, and no matter whose lens you read her life through, you see her as a very real person. What stands out is Deepti’s subtle play on Feminism – where her characters emerge as fiercely strong women, be it Nita herself as she comes alive in the reconstruction of individual memories, or Vinny, Kavita and Roma – each of whom are fiercely independent, defined by their own individual identities rather than by their affiliation to men in their families.

The second star of the book is emotion. The fear, the malice, the anger, the curiosity and in places, the subtle placement of guilt (without degenerating into a soppy drama no matter where the guilt resurfaces – I’m not spoiling it, so I’ll stop this description here) all are really well thought out. It clearly comes forth that Deepti is not your average writer, and has in all possibility, become an anthropomorphic version of each of her characters while writing them out. In most books, one finds that the characters are consumed by everything in the book and live, breathe and exist within the frame of the plot or the subplots alone. But here, you can see that each of these characters can well be parallel lines and do have lives of their own and that Nita’s death begins to be a transverse that cuts their lives in the toughest of places.

In most books, one finds that the characters are consumed by everything in the book and live, breathe and exist within the frame of the plot or the subplots alone. But here, you can see that each of these characters can well be parallel lines and do have lives of their own and that Nita’s death begins to be a transverse that cuts their lives in the toughest of places.

What’s also interesting in the book is that it is a mirror that reflects society – relationships and the individual segments of lives that dovetail into one another makes for the common tapestry of life. It’s interesting how interconnectedness dovetails in and out of the book – and you realize eventually that one stone in the water means a wave of ripples that fan outwards into the periphery. What that translates to, is an empowering and empathized rendition of each life and how one incident can impact so many, in so many different ways. The diary entries, the letters, the light-hearted conversations in the household, the spring cleaning routine and the exchanges between characters come with a depth that lends credence and poignancy to the tale in the most creative of ways.

This brings me to the question: What was Nita’s death about? What went on behind the scenes?

The whodunit at one point makes you think it’s predictable and that you have the killer – but that’s clearly a well-thought out mislead. The misdirection then makes you realize that the author has successfully messed with your mind. A total thriller, this one.

If you’d like to pick up Step Up: How Women Can Perform Better For Success by Anju Jain, use our affiliate links at Amazon India, and at Amazon US.