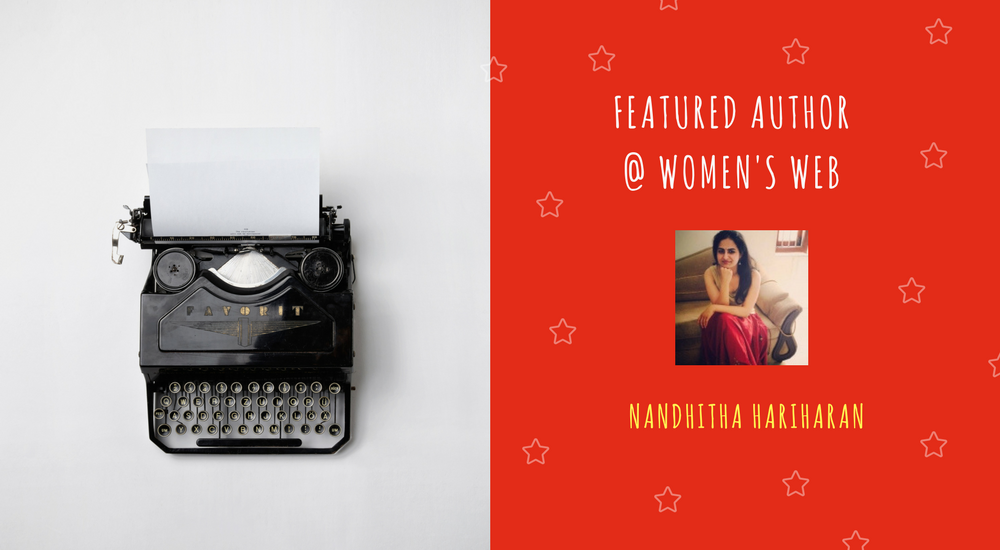 “I’m Very Interested In The Idea Of Inclusive Feminism.” – Nandhitha Hariharan, Author Of The Month, July 2017

Nandhitha Hariharan is a writer who comes across with searing honesty. She is unafraid to explore the most taboo of topics, and her feminist writing is deeply rooted in her lived experiences.

Every month, we identify and recognise three fantastic authors from our community, whom we believe you should read more of. Nandhitha Hariharan is one of our featured writers for July 2017. Nandhitha can be found writing here at Women’s Web and on her own blog.

My favourite thing to say is that I write because it keeps me sane in an otherwise insane world! The way this world works for me is very strange – If you asked me to name some buildings on the way from home to work, a route I have been taking for years now, I would blink and tell you I don’t know. But if you asked me about how people feel, how emotions are and how different perspectives are all justified in their own way, I would be able to point out the tiniest details for you.

I don’t see the world as days when it rained and blue buildings and concrete but I often see it only through the emotions of people and the logic associated with these emotions and writing is how I cope with living because it is the tool that helps me make sense of it.

When and how did you first begin writing?

I think I have always enjoyed telling stories! I had a major confidence crisis when an English teacher read my essay and called it incorrigible but I guess we all move on and I still have time to find out if she was right.

Even as a little girl, I would narrate my own versions of the stories I read changing just a few details. Writing became serious when I first got published in high school. Even though a lot of my writings are still stuck in the journal, I have more confidence now to show some to the world.

Do you have a muse?

Definitely. I think I take away something from every person I meet.

Having said that, I have met a few people who have pushed me so strongly to write… both in good and bad ways that I don’t really know if they will fit into the box called muse but well, love them or hate them, I have to thank them for the stories!

Where do you get your ideas from?

I have never been fascinated by fantasy whether it is for reading or writing. This is mostly because I cannot get myself to withdraw from the magic of everyday life to sit and make time to conjure an alternate world.

All my writings reflect myself and the people I interact with. I think there is a certain honesty that comes with writing about everyday life – suddenly there is no hero and villain, just stories that help you deal with life.

When it comes to writing on/for/about women, what questions and issues drive you the most?

The very fact that there is so much to learn and write about. Off late, I am very interested in the idea of inclusive feminism and sensitizing those with privilege.

There is a need for women who are writing about feminism to recognize their own privilege whether it is the caste they belong to or anything else that might be putting them at an advantage. Because I come from a pedestal of privilege, I recognize it and I also want to sensitize those who come from similar advantaged urban backgrounds.

On the other hand, I do find a lot of negativity in the ways in which this sensitization is done. It is scary that some men and women too have taken to sensitizing women who don’t recognize their privilege by shaming her in ways only women get shamed. For example, someone I know was called a ‘Brahmin Slut’. Yet to find someone call a man that.

I have been thinking a lot about how to sensitize those with privilege and how to help foster healthier discussions here rather than just abuse and stone pelting.

Anything you’d like to tell others who would want to write?

Keep writing and stay humble. If there is one thing that does not go out of fashion, it is people who know that they don’t know everything. Embrace your ignorance but also keep trying to grow out of it. Accept criticism but choose carefully with which ones you want to work on and as far as internet trolls go, pay as little attention to them as you can.

I also think that writing is so therapeutic – make full use of that and heal yourself and other people if you can!

Sharada Subramanian Writes Soft Erotica And Is Unapologetic about It

“Writing Is Like Unburdening Myself On Paper!” Nandita Sharma, Author Of The Month, July 2018