It was just posing, to put up on social media. A fake love story made true in pictures. Was it really enough?

Ria sat down browsing pictures from her recent couple shoot. She was excited at the number of high definition professional photographs that came out really well. So well, that she had a hard time choosing the best one to post on social media. Though she was immersed in admiring her perfectly posed pictures from the photo shoot, her admiration wasn’t really from within.

She loved the way the DSLR camera captured herself and her husband in cliched poses, but a closer look at the photographs revealed the truth of what was actually missing.

They had everything that could make up a beautiful, romantic picture – a picturesque location, perfect clear blue sky, their brilliantly vibrant and rich outfits that were actually in sync with their scenic background. In spite of having the best to produce best shots, the picture didn’t seem complete. Though the couple held each other close to recreate a romantic pose, there was no sign of love in their eyes. The pose couldn’t justify their chemistry nor that they were actually drawn towards each other.

Ria convinced herself of liking her photographs of fake romance. After all, she had a hard time convincing her husband for the shoot on the occasion of their anniversary. Though the couple weren’t really in a mood of celebrating the recurrence of their wedding day, she had to get a photo shoot done, just to remind the world of her marital bliss.

She finally posted few of her pictures from the shoot on social media with corny captions and cheesy hashtags.

The next morning Ria woke up to more than 500 likes and hundreds of comments on her pictures. She was elated and smiled at what her friends thought of her and her marital life. She was glad at her projected fake life and the opinions of virtual stalkers.

Though her husband showed no interest in the photographs nor in spending time with her on their anniversary, she was content to have found her happiness in fakeness. 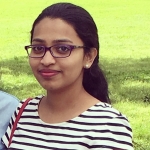 A software solutions specialist by profession, trying to rekindle long lost love for writing and