Badass Heroines Do Their Own Thing; Check Out These Creative Illustrations!

The story of why I created these digital illustrations featuring badass heroines at Queens OnScreen. Check them out. 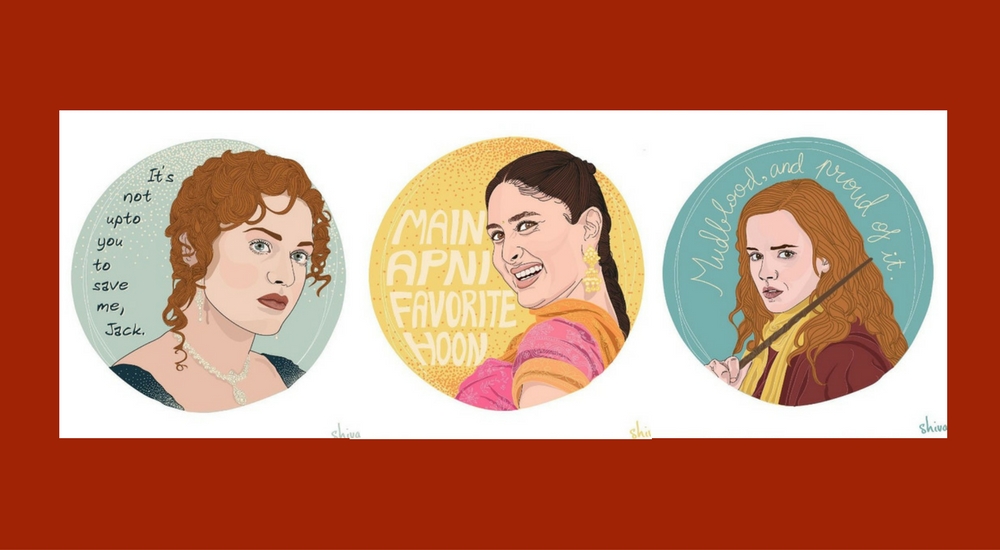 The story of why I, Shivani Gorle, created these digital illustrations featuring badass heroines at Queens OnScreen. Check them out.

Last month, I started a series of fun illustrations of powerful female characters from the movies called Queens OnScreen. I believe everyone needs to appreciate that films have finally begun to lay an emphasis on strong, feminist and well-rounded characters, which I bring forth with my digital drawings.

The idea behind the series is that the heroine is just as badass as the hero. That she doesn’t need to talk, dress or behave in a particular way to win hearts. Or not win hearts. Because she can do whatever the hell she wants.

I set out to pick bold and powerful female characters from both Hindi and Hollywood films. To add a bit of quirk to the series, I created a circular format. Now every time I go to my Queens OnScreen Instagram account, I feel some sort of OCD-fueled satisfaction. I have a thing for circles! (Completely irrelevant fact: my room has a circular bed, 6 circular ceiling lamps, circle-themed closets and 2 big hanging hula hoops.)

I also thought it necessary to add the character’s quote from the film, to make the message more effective. For instance, Nina’s “I just want to be perfect” from Black Swan puts her conflict in context and tells us more about her raison d’être. It’s also hard to imagine Geet from Jab We Met without her saying “Main apni favourite hoon”. The dialogue sheds light on who she is as a person.

I use Adobe Illustrator to create these vector portraits. I haven’t professionally been trained in digital illustration, and up until 6 months ago, I was only used to sketching with a physical pen or pencil. So now that my Bamboo drawing tablet and I are new friends, we’re figuring it out as we go. I use my stylus and the brush tool as I would a normal pencil.

From playing Bond and blonde girls, to taking up challenging roles in revolutionary and coming-of-age films, female actors have come a long way since the 20th century. What may have been a sad state-of-affairs for gender equality in the film industry several decades ago, is now slowly adapting to a freer, more diverse and more equal world. As Oscar Wilde said, Life imitates Art far more than Art imitates life. And that holds doubly true for films, whose messages influence and motivate both the makers and the watchers. I think that with the advent of this feminist wave, only good things are in store for the film industry.

With my work I hope to drive the perception that the movies we watch today are not just for entertainment; they have become real vehicles of social change. Characters like Hermoine from Harry Potter and Shashi from English Vinglish reflect our new experiences as 21st century women in both urban and rural (and magical) settings.

I want all sorts of girls, boys, men and women to look at my art and feel that positive change. I want them to appreciate that that the art they consume holds a mirror to real communities, and that they can always look up to characters that are relatable, if not harbingers of social reform.

In the near future I hope to eventually create Queens OnScreen-based merchandise, by printing these heroines-in-circles on notebooks, t-shirts, badges and canvas bags. Things we could wear to show our feminism off to the world! I currently have 16 in my series – many more illustrations are in the pipeline – and I won’t stop until I touch at least a 100!

You could check my pages out to find out more:

I’m 21 and I live in Mumbai. I graduated last year with a bachelor’s degree in mass media - specialising in advertising - from KC College, Churchgate. I’ll be getting my masters in branding read more...