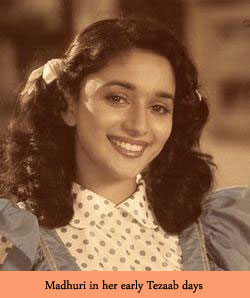 Many Indian female actors continue to give big hits even past their salad days. Is age still a barrier for Bollywood’s heroines?

Save the odd young actor like Konkona Sen Sharma, the average female lead of a Bollywood movie goes through three distinct phases of development:

1.They have no idea what they’re doing and depend on their directors/producers to guide them; easily recognized by skimpy outfits and lack of acting skills.

2.They know enough about themselves and their craft to draw boundaries and work within them; this is when announcements of “I will no longer kiss/take my clothes off on screen because it is against our culture” appear in interviews.

Madhuri’s career is perhaps the best example – Bollywood loves to wax nostalgic about her today, but back in the late 80s/ early 90s, she was a controversial figure with her now-celebrated numbers like Chholi ke peechche drawing tremendous fire from moralists. A cute Rajshri Pomeranian and some Yash Chopra chiffon later, she transformed from a pin-up girl to the epitome of womanly grace. And in so doing, became something more than just another successful star of a certain period.

Recent research suggests a woman reaches her peak attraction level around the age of 31. Feel free to take that with a pinch of salt but it is true that while Hindi cinema has a long history of launching shockingly young (sometimes underage) female actors in exploitative roles with a congratulatory air, it is the older women who make a lingering impact.

… while Hindi cinema has a long history of launching shockingly young (sometimes underage) female actors in exploitative roles with a congratulatory air, it is the older women who make a lingering impact.

Sridevi, for example, spent her younger years churning out B-movie after South-produced B-movie, with the odd prestige project here and there to show for it. Her iconic roles in movies like Chandini, Lamhe and Chaalbaaz came towards the end of her career when she’d grown into a woman with a commanding screen presence that frequently ate her co-stars alive. Most women in Hindi cinema unfortunately follow her career trajectory: just when they reach their truly interesting period, nobody wants to make movies with them anymore because conventional “wisdom” holds that the audience doesn’t care to fantasize about older women, especially if they’re someone else’s wife. Thus begins the slide back into mediocre cinema and eventually retirement – either offscreen or into thankless roles as the white-haired mothers of their former male co-stars.

Others might find notions like these infuriating but I find it charming – what a gentlemanly audience! Nothing at all, I’m sure, like those icky degenerates whose devotion to the sexual antics of a much-married cartoon housewife became national news, leading the government to actually block the website that carried it!

These, I suppose, are the ruffians who gave Dimple Kapadia a rapturous welcome when she returned to the movies after her separation from Rajesh Khanna to roll about a swimming pool with Rishi Kapoor in a see-through red saree; the ones who weren’t thinking about Bindu’s husband when they saw her shake and shimmy to the catchy tunes of the 70s.

Sharmila Tagore did some of her best work with the hottest directors of her day even after marrying royalty with much pomp and ceremony. Her age and marital status might even have liberated her from a never-ending cycle of melodramatic blockbusters.

In fact, despite all the fuss people make about older actresses, it is interesting to note that they’re hardly revolutionary even in an industry as conservative Hindi film-making. Sharmila Tagore, for example, did some of her best work with the hottest directors of her day even after marrying royalty with much pomp and ceremony. Her age and marital status might even have liberated her from a never-ending cycle of melodramatic blockbusters. Similarly, Rakhee’s troubled marriage to Gulzar did not stand in the way of her career as an A-list leading lady opposite the biggest stars of her time. The preternaturally preserved Rekha, of course, occupies a category all her own – it is highly unlikely we’ll see another one of her anytime soon.

The same research that pegged 31 as the optimum age for female attractiveness also noted that confidence played a greater role in determining “beauty” than features alone. Little girls who pout and thrust their bosoms will always find an audience but a woman who’s been there, done that, and knows better, represents an exciting challenge of another sort – and appeals to female audiences as well.

Perhaps this is why Aishwarya Rai has been a star, instead of merely another beautiful face, since the day she stunned India and Aamir Khan with one cool look in a Pepsi ad. As she said recently in an episode of Koffee with Karan, there’s no reason why you can’t have it all.

I’ll Be Barbie When I Grow Up