Why Should Irom Sharmila’s Choice Of Partner Be Anyone Else’s Business?

After sacrificing the prime years of her life for a greater cause, Irom Sharmila is questioned about her personal life. Women have ordinary desires too. 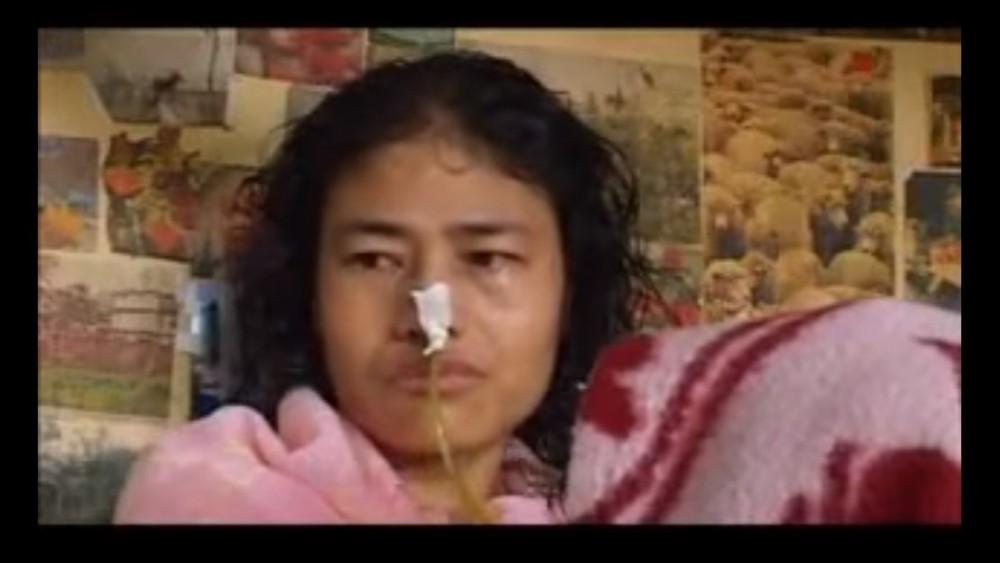 After sacrificing the prime years of her life for a greater cause, Irom Sharmila is questioned about her personal life. Women have ordinary desires too.

Irom Chanu Sharmila, the Iron Lady of Manipur, broke her 16-year long fast on Tuesday, 9th August. Sharmila was 28 when she went on a fast after the Assam Riffles personnel gunned down ten civilians, including teenage students, at Malom near Imphal.

Sharmila wanted to be a doctor when she was young but after witnessing atrocities in her state, she chose to fight peacefully against the armed forces special powers act (AFSPA) that allegedly gives soldiers the ‘license to kill.’

For over one and a half decade, Sharmila had been kept alive by artificial feeding through surgical tubes. Not only had the government attempted to force feed her over the years but she had been arrested several times under Section 309 of the IPC under allegations of attempted suicide.

And yet after sacrificing her dreams, after living without tasting a morsel of food for 16 years, after being confined to a prison-turned-hospital during the prime of her life, what does she get in return? Harsh criticisms and abandonment for giving up on her hunger strike. Some radical groups have even threatened her with death for ending her fast. Sharmila Rao Shows Us The Way With Hope And Courage, Despite Horrifying Setbacks In Her Life

The Iron Lady: A Poem On Irom Sharmila

Sharmila had been the recipient of several prestigious awards such as Gwangju Prize for Human Rights, a lifetime achievement award from the Asian Human Rights Commission, and the Rabindranath Tagore Peace Prize. In 2013, Amnesty International declared her a Prisoner of Conscience. However, her supporters including her own family tend to forget that she is also a woman with ‘ordinary desires.’

After 16 years of resistance and after being mostly in custody, Sharmila now wants to contest in Manipur’s election and run for the position of Chief Minister. She also wants to marry the Goan-born British national Desmond Coutinho.

But will our patriarchal society ‘allow’ her an ordinary life? When Sharmila started her fast, she had never asked anyone to join her in her protest, then why can’t she independently come out of the protest when she feels like? Hadn’t she already sacrificed enough?

Sharmila found herself without any supporters after she called off her protest on Tuesday. It seems that even her own family had forsaken her and she might have to continue living in the 8×12 hospital ward that served as her ‘home’ over the last 16 years. (Media reports reveal that she was not welcome in her own family’s homes either.)

Her former supporters such as members of the Sharmila Kanba Lup (Save Sharmila Campaign) showed their anger for ‘Breaking their trust.’

Even her plan to get married to Desmond Coutinho was criticized by many who feel that the ‘outsider’ has influenced her decision to end the fast. Many think that he was planted by the government to weaken Sharmila’s resolve to fight.

It is noteworthy that in 2011, when the media first wrote about Sharmila’s relationship with Coutinho, the civil society bodies in Manipur had termed it as ‘an insult to Manipuri people.’

It is indeed interesting to note how a woman’s decision about her personal life can come so easily under public scrutiny no matter how big her sacrifices for a greater cause. Even if people’s paranoia regarding Coutinho turns out to be true, what right does anyone have to dictate whom she will or will not marry? Also, why should we assume that she will abandon her cause just because she wants a normal life?

If her supporters are so concerned about continuing the protest against AFSPA, why can’t they start their own hunger strike and make all the subsequent sacrifices that she had made so far? Why is she being considered to be a property of the people without a say in her own life?

Irom Sharmila has been the face of the fight against AFSPA. She had brought Manipur’s terrible plight to the international limelight. In fact, in a landmark ruling in July 2016, the Supreme Court has agreed to investigate hundreds of alleged illegal killings in Manipur. And yet today, Sharmila stands all alone.

We hope that Sharmila’s erstwhile supporters and the larger community realizes that she has the right to choose her life and that doesn’t undermine her noble sacrifices and the efforts she made so far. We also hope that the rigid mindset of our patriarchal society starts changing for the better.

Some women have made a huge difference to the lives of ordinary Indian women by their unending effort. Here are 12 famous feminists that we look at today.

Some women have made a huge difference to the lives of ordinary Indian women by their unending effort. Here are 12 famous feminists that we look at today.

In a world like ours’ where women face a number of difficulties and tribulations, it has become rather important for famous feminists to stand up and use their voice. Especially since a lot of the women who speak out need support and encouragement.

Who are these famous feminists? And what is their contribution?

“In Reality, Homes Are Not Safe For Women”: Sharmila Seyyid

In this interview, Sharmila Seyyid, the Sri Lankan Tamil Muslim writer reflects on her novel Ummath that presents women’s yearning for freedom and dignity in a patriarchal society.

In this interview, Sharmila Seyyid, the Sri Lankan Tamil Muslim writer reflects on her novel Ummath that presents women’s yearning for freedom and dignity in a patriarchal society.

I recently got around to reading Ummath, Sri Lankan Tamil writer Sharmila Seyyid’s debut novel, which brings alive the stories of three women, Tawakkul, Yoga and Deivanai – with Tawakkul hailing from the country’s Tamil Muslim community (that Sharmila herself belongs to), and Yoga and Deivanai being Tamil women who join the LTTE, although for very different reasons.