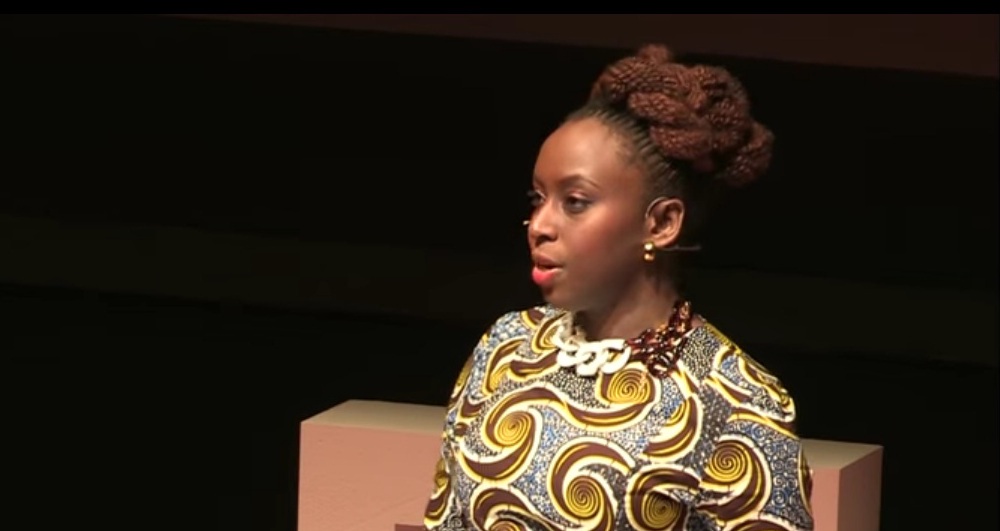 Nigerian Author Chimamanda Ngozi Adichie became a mother and chose not to disclose the news to most. Here is why.

For all those who have been there and done or rather not done THAT, you know what I am talking  (Errr…not talking) about! Hahahaha! And for those to who, all this just sounded like some sort of  gibberish baloney, let me assure you that I am neither insane nor drunk speaking.

Rest assured, all is sane, sober and super-wise out here in Women’s Web. Yeah! We’ re the Super-Women, Yo! (Drumroll please!)

This is simply the hangover after lapping up the recent interview of the much celebrated, prize-winning writer and one of the biggest proponents of feminism in recent times – Chimamanda Ngozi  Adichie recently caught journalist David Pilling, completely off guard when she opted for a sober mocktail during their interview as she was breast feeding.

Before he knew what just hit him, he was in for a bigger shock to know that this adorable yet sensational piece of news was just that – news to even some of her closest friends.

When further probed by Pilling to know the baby’s name, he was met with a disarming smile and a firm No to reveal no further information about the baby. Adichie stopped Pilling and possibly, many other nosy-pokers (before and after this interview), right there in their tracks when it came to the issue of her pregnancy.

While Adichie’s decision to keep her pregnancy private might have come as some sort of blasphemy in some of your dictionaries on life etiquette, it rang a bell or two or perhaps three in some others; like me and some of you, perhaps.

We live in a country that is still at a nascent stage when it comes to understanding and respecting an individual’s right to personal space and privacy. Everyone is everyone’s yaar, dost and family here. Think the role-model Rajshri family portrait picture and flick “Hum Saath Saath Hain.” “What is this, Tina? You are 4 months pregnant and you are informing me now?” quipped an Aunty disapprovingly and grudgingly some years ago. Especially in our country with its cultural ethos, some people can take it personally when you choose to simply keep private matters private.

They treat it as a serious underlying problem or failure of sorts – failure of love, intimacy, trust, affection and friendship. So, if you come under that category of people who find it hard to digest other peoples’ need for personal space and have a tough time figuring and understanding individual privacy, then here are some pointers to help you.

The dream that took so long to be fulfilled

In this age of ‘Double Income No Sex’ marriages, increased fertility issues owing to modern lifestyle or choice or mere incompatibility, it is quite common to witness couples who have their first child, well after several years of marriage …6 years to 10+ years down the line.

After a couple of disappointments, heartbreaks and abortions down the line, the dream of finally being pregnant makes some women and couples become highly cautious, protective and tight lipped till everything goes safely and smoothly as per the plan. In such cases, it’s good to give the mother and father-to-be, their much needed privacy in the happiest moment of their lives.

Pregnancy, as such is a roller coaster ride of serious emotional highs and lows, all throughout those nine laborious months of love. While some women cope through this turbulent time by looking outward and sharing their feelings with friends and family, others look inwards. To reflect, savor and soak in the present moment by bonding with their precious little baby growing inside their body!

While this might be seen as an act of shunning by near and far ones, this choice by the Mother to seek privacy in this precious yet raw and vulnerable moment of eternal bliss should be respected and protected.

Pregnancy and superstition go hand-in- hand much like a ‘Buy 1, Get 1’ sales offer that one sees in the retail market nowadays. Whether it is ancient folklore or modern day psyche readings, some mothers choose to go hush because of plain old superstition. And this extends beyond the baby’s birth as well, keeping them tightly under wraps a couple of months way past the birth.

Whether you swear by the ‘Buri nazar’ (evil eye) phenomenon or the slip between the cup and the lip; adage, one cannot deny that pregnancy turns even the most rational mother on the planet to a cautious, superstitious being chanting up her prayer beads and seeking divine intervention and calling all forces for the pregnancy to go on smoothly without any hiccups.

Some pregnancies are simply put, high risk in nature. Whether it is the health of the mother or baby in question, the reasons could be multitude ranging from gestational diabetes to congenital disorders to high blood pressure to sugar etc. Some mothers have a lot of personal health battles to fight before they choose to make the formal announcement of the baby’s arrival. Be kind, patient and empathetic in such trying times instead of playing the blame game with your friend/mother-to- be.

Maybe this entire pregnancy health scare has reduced your friend to a bundle of nerves literally. For all you know, they might be fighting loneliness and depression during pregnancy and post it as well. Ever heard of post partum depression! Think Brooke Shields! Perhaps owing to this entire serious health scare, they are just not ready to face the world and you for now. No…no…not just as yet, honey!

Some mothers may choose to be private about their pregnancy simply out of free will and choice. They feel entitled to own and make the decision to reveal nothing to the world, including close family and trusted circle of friends. The ‘My body, my baby, my right’ philosophy guides the actions of these mothers. Much like the main protagonist in this featured story, Chimamanda Ngozi Adichie. It’s probably a joint decision by the mother and father ..a la Aditya Chopra-Rani Mukherjee!

So truly speaking, there really is no right or wrong way of doing things. Whether you choose to keep the pregnancy prive’ or announce it ‘L’ala grande’ style, your decision is always right. Because it is your life, your baby and you are the Mother! That’s God’s will that he has entrusted the responsibility of the baby in your hands and has trusted your intuition, intellect, wisdom and judgment to make the right decision.

So, the next time, when a sneaky but perhaps well-intentioned relative or friend cheekily asks you, “So humko good news kab de rahe ho? Party toh banta hain, boss!” simply remind yourself that you are under no obligation whatsoever to tell anything to anyone at all.