In her book Bicycle Dreaming, Mridula Koshy tells the story of the dreams of a young girl of thirteen, who is baffled by her family’s actions.

Young girls of thirteen have all kinds of dreams, especially if they come from families where privileges are few and far between.

Noor is the daughter of a kabariwala. She dreams of a bicycle and draws circles in her schoolbooks. The school she goes to is a charity school because finances are tight and her father’s career is under threat from a plastic incinerator.

For Noor life is a puzzle that baffles her. She confides in her friend Haseena, but Haseena does not reciprocate, nor does Noor expect her too. Gradually she begins a relationship with one of the boys in her school, Ajith who gently makes fun of her but listens nonetheless to the dream of the bicycle that goes round and round in her head. Her best friend Haseena seems to have grown distant and Noor has no one to open her hear to.

It alarms her that Haseena’s father keeps taking Haseena in and out of school as family requirements dictate. She sees herself faced with a similar future. However, her parents, despite their problems, prove more understanding.

Noor’s family life suddenly fragments – her brother Talib disappears shortly after she carelessly leaves his pigeons to the mercy of the neighbour’s cat. Noor thinks that it is something to do with her brother’s disappearance. For a while the girl feels guilty, unable to comprehend where her brother disappeared to.

People begin to fall away from Noor’s life – her mother goes in search of Talib and does not return. Her brother has already left, and soon, Haseena too has to go away. Noor learns to cook and clean for her father and begins to realise that he is a worried man, even though again she does not fully understand the implications. Her worry is that her brother is more important to the family than she is and she wants to prove that a girl can go beyond cooking and cleaning.

Mridula Koshy revisits the territory that she knows, the world of the underprivileged minority communities and describes in sympathetic detail Noor’s life and longings. She uses the format of a diary to allow Noor to express her innermost thoughts in the guise of a school assignment. 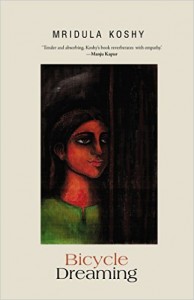 Through the story Koshy illustrates the difficulties of growing up – the fact that parents do not often share family issues with the younger children, that young girls can be totally unclear as to what they themselves want. The scenario seems to hint at violence but that remains on the outskirts – the cat among the pigeons, Haseena’s mangy dog’s hooking and Noor’s father’s problems with those who demand protection money in return for allowing him to continue his business.

Religion is not really an issue in this book. Noor finds herself drawn to Ajith who comes from her kind of shanty town, especially after she loses Haseena from her life. In a sense the book is about loss, longing and the desire to be loved that becomes of such great importance to young people.

Koshy brings hope to a situation that at first seems to be hopeless. Noor comes of age and rides a new cycle of dreaming on the wheels of her bicycle – one where she envisions a more meaningful future.

If you’d like to pick up Bicycle Dreaming by Mridula Koshy, use our affiliate links: at Flipkart, at Amazon India or at Amazon US

Anjana Basu: Anjana Basu was born in Allahabad and started schooling in London. She works as an advertising consultant in Calcutta. She has also worked on a couple of scripts with the director Rituparno Ghosh and has subtitled several of his films. Her byline has appeared in various magazines, and she reviews books for publications like Wasafiri and Outlook.

9 Ways To Woo A Woman According To Bollywood