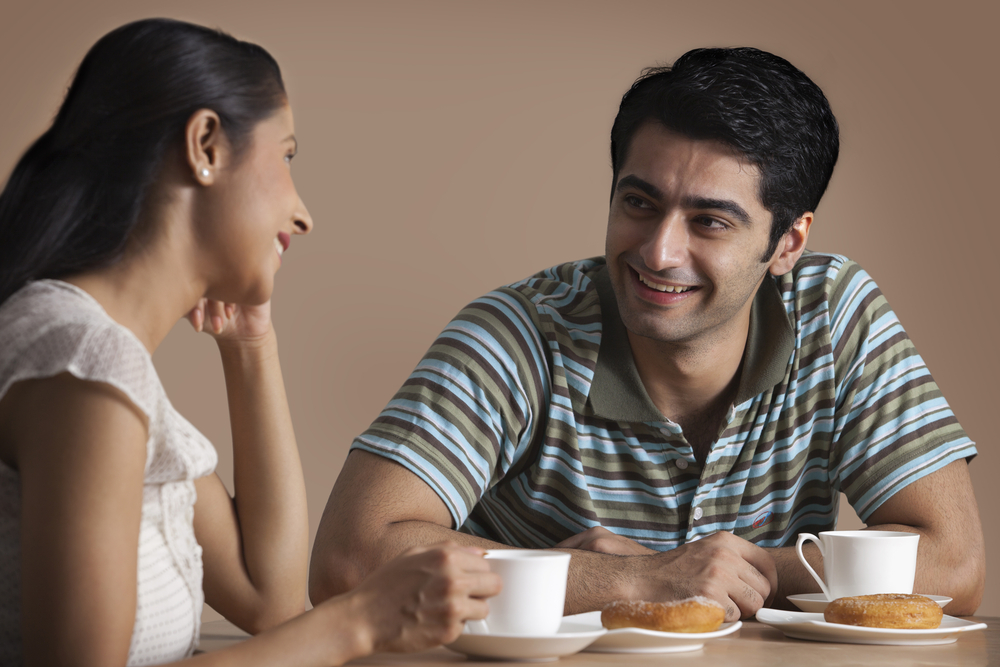 Tania is married with a child and is leading a fairly normal life but when she meets Nikhil, an old friend from school, the tables on her marriage are turned. Read on to find out what happens.

Tania woke up with a sense of frustration and boredom.It was going to be the same usual day. She dragged herself out of the bed and headed towards the bathroom. Atul, her husband of ten years, could be heard making tea in the kitchen. This had been their routine ever since their daughter, Rini was born. Atul would wake up before Tania, send Rini to school and prepare the morning tea. Tania on her part would start her day only after having her morning tea.She had convinced Atul that she desperately needed the tea to kick start her day and Atul had calmly agreed to the responsibility. There were hardly any arguments between them.

Atul entered the bedroom, carrying two huge mugs of tea. Tania emerged from the bathroom and picked her mug while adjusting herself on the bed.

The two of them picked up the newspapers and quietly read it while sipping tea. No one spoke a word. To an outsider it would look that they had fought but this was just how their relationship was. Not many words were spoken between them. Ten years of marriage had bred a deep familiarity and taught them what to expect of each other.

But, the silence that was so pleasurable to Atul, was dreadful to Tania. She had tried to complain and had even fought with him few times, but nothing moved Atul .It seemed to be his disposition, to which Tania had now adjusted, in fact surrendered.

When she was younger, she had always imagined her marriage to be filled with several romantic moments. But her marriage to Atul never had any such moments. He thought that such things were frivolous and childish. Tania resigned to buying flowers for herself on her birthdays and other occasions!

As soon as Atul finished reading the papers, he got up to get ready. Taking this as a sign, Tania too collected the mugs and went in the kitchen to prepare breakfast. Once Atul left for office Tania would get engaged with the household chores and other dreadfully monotonous things.

Today, Tania had to go to the local super market to get the weekly provision. She got dressed in a simple suit salwar and though of applying a little lipstick to brighten her face. But put it down as quickly as she had picked it up. What difference would a little lip colour make in her life, she thought, as her lips twisted in simmering anger.

She walked towards the supermarket and felt a cold gust of wind hit her face when the security guard opened the door for her. She took a long deep breath and walked towards the grocery section. She went past several items, kept neatly on the stacks. As she was examining a packet of rice, she felt that somebody was keenly looking at her. She lifted her head to see a man, with a heavy moustache staring at her.

Tania deliberately ignored the voice and pretended to be engrossed in her shopping.

Hearing her name, Tania instantly turned around to face the stranger.

“I said are you Tania? Well don’t take me wrong. But I used to have a friend in school named Tania who looked a lot like you. I could not resist coming up to you and asking .Please excuse me if I’m wrong.. I didn’t mean to disturb you…”

“Oh Tania don’t you recognize me? .It’s me Nikhil ”

“Nikhil? Oh yes! Oh my god I could not recognize you at all. You have changed so much with the moustache and all. How have you been?”

“Well I have been good .Got a job in your city so I shifted last month. In fact I’m still settling down and doing up my house.

“What about your wife? Has she come along?”Tania looked around the store.

“I’m still a bachelor. Not everybody is as lucky as you to settle down so easily in life”

“So what are you doing after shopping? Let’s have coffee and catch up on all the years gone by.”

There was still time until Rini came back from school. A coffee would not take much time and Tania would have something different to do from her routine anyway.

“Okay, let’s go” answered Tania after thinking for some time.

Both of them quickly finished their shopping and headed towards the nearest coffee shop.

As soon as they settled down, they began exchanging notes on their respective lives. And before they knew it, it was already an hour. From their last meeting in school till today, every missing dot had been connected. Nikhil hadn’t married because he had not got the right girl. Tania, spoke of her marriage in a rehearsed manner. By now she had learnt what things were to be said and what were to be left unsaid. They exchanged their numbers and parted ways. Tania returned home feeling happy.

At night, when Atul came back, she did not tell him about Nikhil. She assumed that Atul would anyway be indifferent to this news as he was to many other things. They lied in their respective corners of the bed and went to sleep. Tania’s mind was still full of stories, Nikhil had told her .She was still recalling their conversation when her mobile flashed in the darkness of the room, the mobile screen glowed insanely as if her lie had been brought to light .But she had not lied to Atul, she just had not told him. She concluded that not telling him did not amount to lying . She picked her phone from the side table. It was a message from Nikhil. It just read, “good night.”

Although Atul was woken up because of the sound and light from the mobile, he didn’t say anything.

The next morning, after Atul left, Tania called up Nikhil. She was annoyed at him for messaging her so late last night.

“Hello, why did you message me so late yesterday night? You should know that I’m married and my husband may not like it.” Tania said rather rudely.

“First of all, good morning! And secondly, I did not think that it would be such an issue. In fact I thought you would have told him about our meeting. Haven’t you?”

“Well, what was there to tell? We just accidently met and spoke for some time. There’s nothing worth telling!”

“Hmm, are you happy Tania?”

The question pierced right through Tania.

Was she happy? Not really. So did that mean she was unhappy with Atul? Even that was not the case. But if it wasn’t so, then why didn’t she just instantly agree that she was indeed happy. Why was she still thinking?

“I have got to go. Will speak to you later” and she hung up the phone.

But the question hung heavily over her. It was as if something had jumped at her without warning and she was lying under its weight; suffocated and breathless.

The entire day the question buzzed in her mind. It drove her mad with its relevance. Her marriage was perfect, in fact anyone would want to be in her place, but something was amiss. It was probably the soft whispers that she wanted to be crooned in her ears; the warm hugs and cuddles while she slept at night; the look of admiration thrown at her unexpectedly; flowers when she least expected and conversations through the eyes. She wanted all these little things that would flutter her heart.

But all she got were nights and days of long silence and monotony.

Tania sighed, thinking about her colorless life. Probably she was actually unhappy and had never noticed but Nikhil’s arrival had bared open this truth.

Nikhil called up after a week and asked her to meet him at the same coffee shop. After refusing many times, Tania finally agreed to go .She had to face her inhibition. When they met, there was an obvious awkwardness between them. At last Nikhil spoke up. He said that he understood the very first day that how unhappy Tania was. There was hardly any spark in her. She looked dull and it seemed that she was dragging on with her life.

But, that is not how life was supposed to be lived. And then he said the most unexpected thing. He asked her to marry him!

Tania was taken aback. In fact she was shocked. How could he say that? And that too, after meeting her only once? Did she look that desperate? She left the coffee shop in a rage. She felt deeply humiliated because now everybody could see how colourless her life was.

As soon as she reached home, she received a call from Nikhil. He was apologetic for overwhelming Tania like that. But he was not sorry for what he had said. He asked Tania to consider his proposal. All he wanted was a happy life with Tania.

Tania thought hard, in fact she thought every second of the day. And finally after days she took the decision. Yes, indeed she just had one life to live and she could not spend it like this. She opened her almirah and began taking out her clothes and belongings. She took out every single piece of clothing and emptied the almirah almost entirely. Just when she was about to close it, she saw a tiny black diary lying in the far end corner of the almirah. Tania had never seen it and wondered what it was. She stretched her arm to grab it.

Just when she was about to close it, she saw a tiny black diary lying in the far end corner of the almirah. Tania had never seen it and wondered what it was. She stretched her arm to grab it.

She skipped a breath as soon as she turned the pages.

In the diary, Atul had written every single thing, Tania had ever desired for in her casual conversations. He had marked them as his goals. Listed among the items, was the villa with a huge garden in the front, that she had wished for many years ago. In fact Atul had neatly written, ‘European Cruise’ of which she had spoken about once, when she had seen an advertisement on T.V.

Every single thing, small or big that Tania had ever wanted was listed there. Atul had silently made her dreams his own. All this time, while she had been whining about the flowers, he had been working silently to fulfill her wishes!

Though ashamed, that she was about to leave the man who did not express his love in words, Tania realised that love was not just about flowers and chocolates and specially so in a marriage. But it was about the things that people did for each other, sometimes without saying a word.

Tania got up to put her clothes back and when she was finished, she cut the sim card into pieces.