The Women of Assam: Weaving Wonders Despite Violence

Women of the Bodo community proves that we can rise from ashes, even in the face of violence, if we have the will. All we need is unity and hard work. The women of the Bodoland Territorial Area District in Assam don’t have easy lives in the aftermath of violence. Yet, with unity and hard work, they face life with dignity.

How much does it take for people to overcome pain? How much effort is required to rebuild one broken nest? Only the one who has been through all this can answer these questions.

The 2012-conflict in the Bodoland Territorial Area District (BTAD), Assam between the Bodo community and the Bengali-speaking Muslim community left a dark scar; it was an unforgettable experience for thousands of people. Much has been spoken about it and many have made attempts to support them.

It is amidst such a turbulent situation that many national and international Non-Governmental Organizations (NGOs) had come down to support the affected people of that area. Many organizations came and went, and many are still supporting the torn and distorted community of people, who for the major part remain untouched or unattended by the mass.

I am sharing my thoughts and experience here as a social worker, who has been associated with these people. The people from this region have been affected by the ethnic violence and have always been facing hardships. They have always been pawns in the hands of dirty political parties, and the miscreants who ignite and trigger violence.

They have always been pawns in the hands of the dirty political parties, and the miscreants who ignites and triggers violence.

Women from these regions, whom we consider to be so mild and incapable of understanding the complexities of life, actually displayed a better understanding and maturity, when it came to rekindling the lost shelter and starting over anew. These women were given a lot of training and awareness at a community-level to start over.

The NGOs sensitized them to the importance the water, sanitation and hygiene. They also provided livelihood-training and enabled psychosocial awareness. They identified people affected by the conflict and assisted them with methods to handle their stress. These women were also asked to form groups to engage themselves in utilizing their skills and ventilate their inert stress and feelings that they could not openly share otherwise. After almost 15 months of support, they have were not only able to reduce the stress amongst themselves, but also utilize their skills to generate income. The NGOs also provided them with financial support to help them meet their needs.

The women’s groups from Kokrajhar, opened a quilt shop with some financial assistance. The NGOs invested Rs. 6500 and as a community, they invested Rs. 3500 for the same. Four months after the initial investment and support, they earned a profit of Rs. 22,500, which they further invested in the said quilt shop.

Similar was the case with the women’s groups from Dhubri. In 2013, these women’s groups sold the traditional aronai and gamusa in the local market and contributed towards their families’ economy. While the men were busy running around to make their ends meet, these women silently worked within the four walls of their homes and managed not only their daily chores, but also strengthened their family’s financial condition.

In many parts of our country, women are considered objects of physical pleasure. They are forced to follow the norms of society and are not allowed to be part of social gatherings. It is not considered important to seek their opinion on family matters, leave aside village matters. But one must not forget that women are powerful creations, and they can do anything one can possibly imagine. Women can not only bear the pain of giving birth to a child, but they can also be ferociously strong and fight battles.

In many parts of our country, women are considered as objects of physical pleasure.

We also celebrated the International Woman’s Day 2015 at Nizlaguri. More than 700 women from 10 villages of the Chirang district participated. The event was an entirely new experience for the people of the area as the most common scenario for the people living in the village is that of conflict, bloodshed and destruction. History speaks for itself; BTAD has been consistently witnessing bloodshed, bullets and human displacements due to the violence and disturbance prevailing in the area.

Nizlaguri, a village, may sound familiar to many residing in Chirang district of BTAD, Assam. This place had recently witnessed thousands of people taking refuge in a camp. Many houses have been burned down and destroyed. People lost their dear ones, many are yet to find traces of their family members, and a few unfortunate children have been orphaned. There is always so much more happening to add to the pain that these people undergo. But these setbacks did not let the spirit of unity collapse, as the women came together on a common platform and decided to give a strong message to those responsible for the brutal bloodshed.

Women from the Bodo community, Adivasi community, minority (Muslim) community, Koch Rajbonghsi, Nepali and Bihari communities – all came forward to celebrate the International Woman’s Day. These women not only planned the program, but also worked unitedly and stood firm against all odds. Interestingly, one of the students union called a bandh on 8th March, yet the women did not lose hope. They started preparing for the day since early morning and made all the necessary arrangements to celebrate the day.

During the celebration a unique kabaddi match was conducted. People from all communities came forward and played it with true sportsmanlike spirit. Before the game started, they shook hands with each other, danced amidst the mass when they won, they laughed and enjoyed themselves, and above all, they accepted each other and made a promise to celebrate such memorable events in the days to come.

This unity of women is a perfect example of how dynamic ‘she’ can be. While men were busy wandering around, venting out their anger and worries, these women came forward and made the impossible possible. Sports and other cultural events can be great platforms to bring people together to spread happiness and peace.

The world may not have been a better place if there were no women. All that is required is a platform, an inspiration and the will power. In a country where women like Jhansi ki Rani – Rani laximibai, Indira Gandhi and Kalpana Chawla were born, today we have women who are brutally forced to sell themselves, and raped. Young girls are forced into child marriage.

From a social worker and woman’s point of view, the only thought that lingers in my mind is how much longer will the rights of women be suppressed? How much more time do we need, as a nation, to consider women as human beings with dignity, equal to men and as beings who also deserve to express themselves freely. It’s high time for the society to open their eyes and treat everyone equally.

Kudos to the entire womanhood – powerful, magical and astounding!

Image of a woman from a Bodo village, courtesy Rajkumar (Used under a Creative Commons license)

*Traditional textiles from this part of Assam 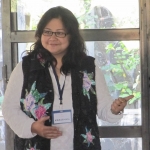 I am a Humanitarian/Social Worker by profession. Working closely with the people from the community in North-East India. I am passionate about my work. Travelling, photography, writing are some of the common hobbies read more...