The Reality Of Child Marriages In India

Child marriages in India are a reality that need us to work not only with adolescent girls but build support for them in the community and state. 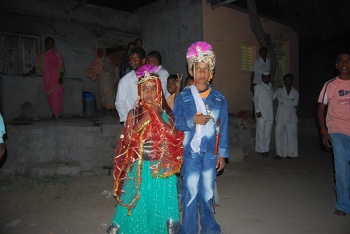 Srinidhi Raghavan is a blogger who works in the field of gender – women and child rights, as a part of the Asmita Resource Center For Women, Hyderabad. She blogs at Carpe Diem.

On the occasion of International Girl Child Day, Asmita Resource Centre for Women organised a small get together with a group of 40 adolescent girls from the slum nearby. We watched a short educational film on forced marriages and importance of education. Ameena, the lead in the movie, struggles to make her parents, who were poor, understand the importance of a girl’s education. She finally convinces them to abandon thoughts of her marriage and allow her to study further.

Following the movie, we asked the girls what they felt about the movie; they shouted gleefully and unanimously that they wanted to be educated like Ameena. Fortunately, all these girls are in schools and striving to get a good education. This is not the case for many of the girls in India for whom early, child and forced marriage is a reality.

Child marriage is a problem affecting millions of girls across the globe. In India, 47 percent of girls are married off before age 18. The numbers have been decreasing over the years but the trend of child marriages still remains. The practice continues unabated because of the deep rooted social acceptance. Child marriage is not restricted to a certain religion, caste or community but it is reportedly seen more in some communities.

Though the practice is more common in poor households, it is not restricted solely to them. Part of the problem rests in the lack of legal knowledge on the issue and the rest in the discrimination faced by the girl child. The need to protect her and in turn her virginity, sexuality and honour has been cited as causes for child marriage across the country. Our work on the issue in Andhra Pradesh through regional meetings has shown that often fear of elopement has forced families to continue the practice. Some communities even felt the girl child spent too much time on the mobile which was connected to promiscuity. Girl child rights have a tendency to get clubbed with child rights or women’s rights though the experience of adolescent girls is different from boys. One is marred with restrictions and violations of several fundamental rights whereas the other is encouraged to be vocal and participate freely in public life. The situation is far more difficult when the issue affecting the girl child is child marriage; here the lines between adolescent girl and woman overlap and eventually blur.

Child marriages have numerous and layered consequences on the health, education and infringes on the freedom of the adolescent girl to live a life of dignity. Even the policies and schemes of child marriage, deal closely with the harmful effects of early marriage on the child’s health or rather the mother’s health. Studies show that girls younger than 15 are five times more likely to die in childbirth than women in their 20s. Child marriages also severely undermine the adolescent girl’s reproductive and sexual health adding to which adolescent girls have a limited capacity in negotiating sexual relations and child bearing. These could result in an exposure to violence within the institutions of family and marriage. Child marriage also restricts the adolescent girl from developing into a holistic human being.

Only a week ago, States adopted a Human Rights Council resolution (PDF) to increase efforts to end early, child and forced marriages (which I gather India is yet to sign). It is also the first time that child marriage itself was considered a violation of human rights. India has ratified the international treaties Convention on Elimination of all forms of Discrimination against Women (CEDAW) that strongly condemns the practice of child or forced marriage. CEDAW even demands that the State take necessary action to bring it to a halt.

India has a moral obligation to abide by the Universal Declaration of Human Rights that states in Article 16: ‘marriage shall only be entered with free and full consent of the individuals’. But the early, child and forced marriages persist in many states of the country, in both urban and rural spaces.

Since the problem is layered, the approach to deal with it has to be on many levels too. It is simply not enough to deal with or work with just the adolescent girls. Currently, the adolescent girl has a poor support system in place. For example, a 16-year-old girl runs away from her impending marriage. The system that exists is not strong enough to provide her support or even surety of a non-judgemental and safe space for her to live. The homes are often poorly managed and many-a-times further spaces for violence to occur. The Child Marriage Prohibition Officers (who are government officials) don’t necessarily know what their job is and sometimes even that they are prohibition officers.

As much as criticism of the practice should be done, efforts should be strengthened to make the government accountable to not just the Prohibition of Child Marriage Act 2006 but the international treaties that it is signatory to. There is a need for dialogue with community, village and local leaders to generate awareness on the law and the need to look at the rights of the girl child in every sphere. Especially within our homes.

Many interactive movies are being made by organisations working in this area to create awareness on the harmful effects of the cycle of violence that is embedded in the practice of child marriage. A few can be seen here and here. Even at Asmita the effort continues to ensure that information, both engaging and from the socio-legal perspective, reaches those at the grassroots in a language accessible to them.

It is essential to draw the parallels between the high prevalence of child marriages in the world and the persistence of deep rooted gender inequalities in both private and public spaces. Its existence makes the struggle for gender equality a tough and important one. In order to achieve a world where the girl child can live free of violence and discrimination, it is important to put child marriage on the agenda. Not just by providing the girl child the opportunity to be educated but enabling an environment where she can live a life of dignity.

Today’s changemaker that we’d like to highlight is the Asmita Resource Center For Women, a collective in Hyderabad that works in the areas of women’s literacy, education and legal support. The collective has a history of using art and culture, including film, to take its work to a wider audience.

They work with women as well as adolescent girls, who are a vulnerable group and often need additional support to fulfil their educational goals and lead a life with autonomy. Asmita also advocates on the issues of violence against women. Asmita is interested in including the voices of women in Hyderabad/Andhra Pradesh from diverse walks of life.