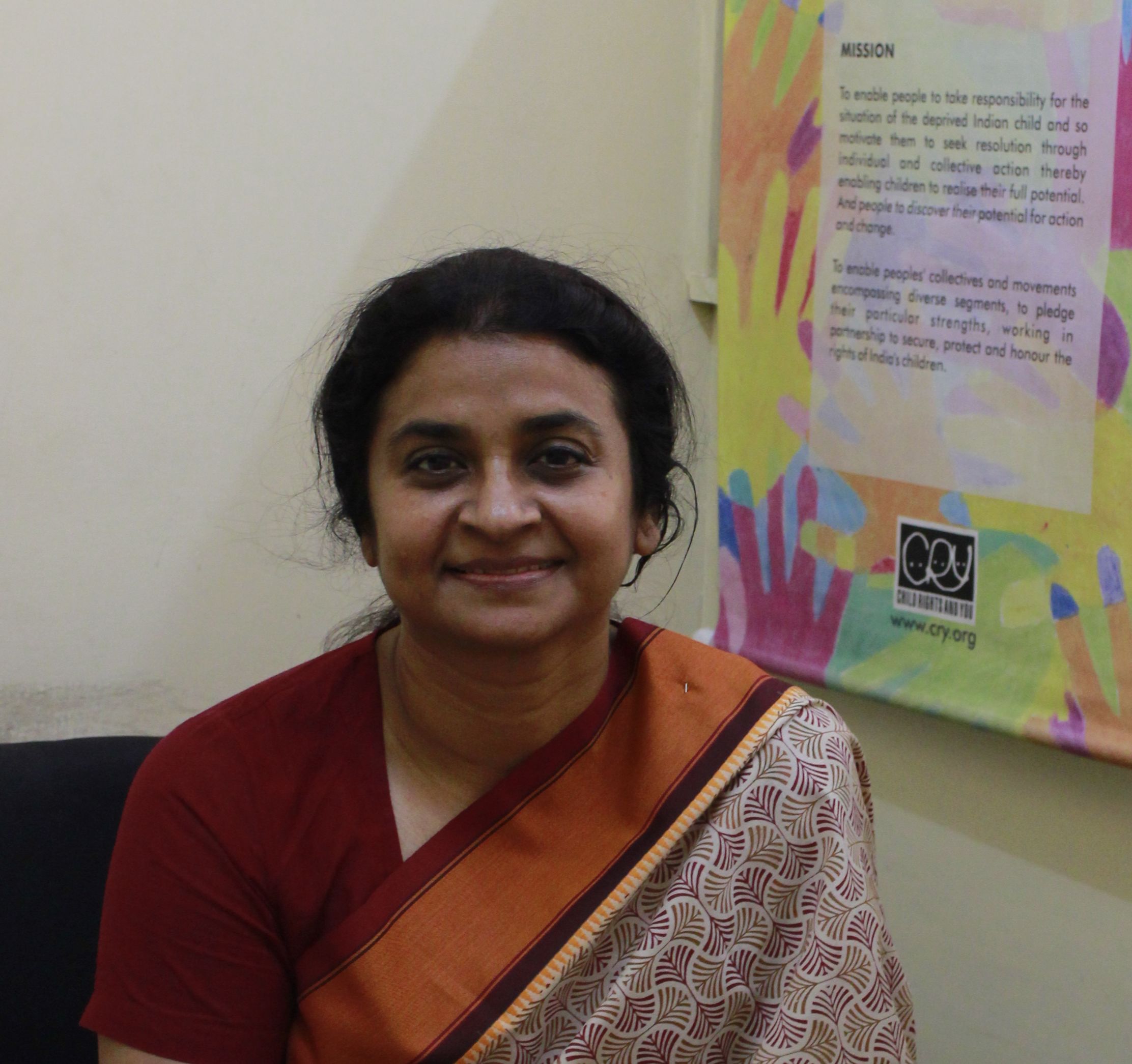 Everyday, there is an influx of children coming into big cities alone and scared, leaving their families for the promise of a better life. Coaxed by dubious agents, they find themselves working as domestic servants and most often, in slave-like conditions, where they are denied food, pay, and good living conditions. They are sent by their parents to the cities with the hope of a better future but they are rewarded with abuse and failed potential.

This is not something that happens far away from you, one of these children could be cutting vegetables in your kitchen right now or sweeping your neighbour’s floor or taking someone’s kid to the park near you.

Suma Ravi, the Director South for CRY (Child Rights and You), gives her views about this accepted practice of child domestic labourers. She is an XLRI alumni who has worked in the corporate world in various countries before working with CRY.While having spent several years in the corporate sector, working in the development sector has always been her first love.

A love born and cultivated by her parents while growing up in a little town in Kerala. The fact that she gets to meet so many inspiring individuals who spread hope and optimism, and achieve so much when having so little to call their own, is one of her strong motivators for working in this field. She is a mother of two and resides in Bangalore with her family.

Anju: Often children from impoverished villages or slums are sent to cities to work as domestic labour. The reason employers give for employing these children is that they are providing shelter and food to them. What is your take on this?

Suma Ravi: The reason given by most middle class or affluent families – that they are providing food and shelter for this child – is nothing but an excuse. Dig deeper and you will realize that it is not benevolence but simple economics that child labourers come with benefits to the employer. They can get away with paying children measly amounts of money and food. Is this all that you would aspire for your own child? It is not OK for this child to not have a childhood, not have an education and not have an option. We would fight if our own child was denied this right, then why not this child?

We would fight if our own child was denied this right, then why not this child?

Children can’t ask for their rights, they cannot demand, and they have limited means to escape an ugly situation. At times the road to hell for these children is paved with good intentions. Child labor is akin to slavery as the child does not have a voice and is not aware of his/her rights.

If these employers were truly being benevolent they would send this child to school. RTE (Right To Education) states that it is mandatory to have primary schools every 1 km in a residential area and a secondary school every 3kms. In urban areas, access to school is easier.

Anju: How and why do parents of underage children send them to cities as domestic labor?

Suma Ravi: This work is usually done by agents who prey on the parents’ insecurities of not being able to provide for their children. The agents promise a rosy picture and money. The going rate is 20,000 to 25,000 per child but most often the parents find themselves swindled out of the money. They are mostly  unaware of the condition their child is in and the truth only hits them if the child makes it back to the village.

Most often the children are sold from employer to employer by the agent and they work in isolated and difficult conditions. The parents send their kids in hope of a better future. If the same parents are given the option of sending their child to school they are elated, because as parents they want their children to escape the hardship they had to undergo.

Anju: How does CRY work in helping these communities and stopping child labour?

Suma Ravi: CRY is an Indian organization that works in the field of protecting the basic rights of children by working on the issue as a whole rather than working on them in silos. CRY believes in engaging the community to develop a sustainable model by educating the community about their rights, working with other organizations, and the government. CRY works in partnership with other NGOs and believes in the sustainable model where the community can continue progress even after the benefactor has withdrawn.

Creating a community that has better access to immunization, education and life skills is a tedious process and takes time, energy and money, but it can be done. There are many success stories too, where children are now en-route to professional courses, such as engineering, in these villages instead of becoming domestic helps or working in fisheries. So, there is definitely a solution to the problem of children being sent to work and it is not in hiring these children because then one is only helping oneself and not the children.

Anju: Can you share your experiences from these villages where the children are sent out for domestic labour?

Suma Ravi: We witness the mass exodus of children being taken away from their villages on the pretext of a better life every other day. Sometimes as many as 300-400 children from these districts are taken to urban areas, and in most cases they end up worse. CRY works from ground up in building livelihood, accessible schools, mid-day meals, hospitals, immunizations and other basic rights which will help keep these children in school. Even one child being sent for work is detrimental to these efforts.

Children are sent to work in fisheries -where they work standing in cold water for the entire day, cotton picking, flower picking and other industries. The definition of hazardous working conditions should be changed by the government as all these industries are hazardous to the health of a child. These children should be in school instead where they can learn and have opportunities for themselves. Otherwise, they are in a vicious cycle of poverty and illiteracy.

The definition of hazardous working conditions should be changed by the government as all these industries are hazardous to the health of a child.

Accepted practices such as hiring a child for domestic labour is not only harmful but it leads to the growth of child trafficking and abuse of children. Domestic labour can also mar the child emotionally as the child is in isolation here and at a young age they don’t have the emotional tools to cope with issues that can arise at an employer’s place.

Anju: What is the age set by the government for the ban on child labor?

Suma Ravi: A complete ban on children under 14 working is awaiting passage in the parliament (currently children under 14 can work in non-hazardous jobs). The bill however allows for children from age 14 onwards to be employed in “non-hazardous” work. The point of contention here is that every job is hazardous for the child as they run the risk of being exploited and abused.

CRY wants a complete and total ban on any forms of child labour, and we define the child from age 0-18 years, as it is mentioned in the UNCRC. There are states such as Rajasthan and Delhi where there have been progressive government orders post 1986 when the Child Labour Protection and Regulation Act was passed. It states that the police can rescue 14-18 year olds from child labour situations.

However, the employers are not held responsible and cannot be charged. Hence they can continue recruiting child labour. So, though there are progressive government orders, they cannot supercede the Act which allows children aged 14 -18 to work. However, it gives the police, authorities, and NGOs the opportunity to intervene.

Anju: What are the changes in society that you have witnessed with regard to child labour in the past decade?

Suma Ravi: In recent times, because of programs such as ‘Sarva Shiksha Abhayan’ India has made progress when it comes to the number of children being enrolled in school, but when it comes to ensuring that our children are protected against abuse, trafficking, and child marriage, we have actually fallen behind. Protection of rights of children is rarely understood and implemented.

While we are seeing an increase in children being enrolled in school, we are not taking measures to ensure that they are able to continue. Children soon drop out after primary school because high schools are far away, or do not have enough facilities. CRY and other partners educate the community about their right to have a school and demand schools and mid-day meals from the government. We are also seeing an increase in malnutrition as the quality of food accessible has gone down.

Anju: What can be done to stop child labour, how can society be involved?

Suma Ravi: We can start by not hiring children to work in homes and industries. Child labour in industries is a rampant problem in India. When it comes to child labour in industries, the children are kept away from prying eyes and it becomes difficult to even get near them. Authorities, Police, and NGOs have to be alerted in time and need to be involved when any such violations are seen, because they are breeding grounds of abuse.

Educating people about the bane of child labour, and awareness about child rights is important. In cities though, people need to get out of their passivity, knock on the neighbour’s door, and ask about the young child that works at their house. At times people need to be asked difficult questions and made uncomfortable for child labor to not be acceptable anymore.

5 Women Working For Children’s Rights That You NEED To Know About!

Amma & Priyamvada: The Two Faces Of A Woman [#ShortStory]