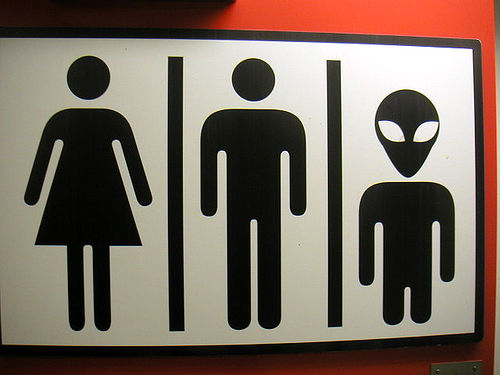 Need To Pee? Find A Toilet!

For many men, peeing in public spaces is a harmless, casual act. Suchi Gaur explains why it amounts to bigger issues of sanitation, exhibitionism, and sexual harassment.

While driving around the city of Delhi, one tends to notice many things: the endless traffic, the singles, the doubles, the families, the lot of people that stare at you because you are a woman driving, and the amazing stores, buildings, and malls spread across the city. And yet, out of these and many more categories, what catches your eye is the unhealthy sight of a man standing with his face towards a wall, doing what relieves him of the “biggest pressure”. Yes, you are right: peeing!

And as this happens, the man suddenly looks back and smiles at you. A smile that makes you ashamed of having looked at it.

Recently, while driving down to a mall nearby, what caught my eye  disgusted me enough to pen down my thoughts on why men peeing in public needs to be taken up as a serious offence. An offence that calls for all women (and men, if they would like to kill their temptation of peeing in public) to come together and do something about this social menace, which is not just an unpleasant sight but also a sexual offence. So, as I relive to you the few minutes of that day, I am sure you could come up with a version of yours, an experience you have had that made you feel disgusted.

… I am sure you could come up with a version of yours, an experience you have had that made you feel disgusted.

While I was driving around with my mother, a car full of women was just in front of me. Thanks to the road being a little out of shape, speed was slower than usual. And there he was, casually urinating. While usually, the scenario has a man standing facing towards the wall, in this particular instance – the man stood facing the road, showing his private parts to the women in the car right in front of me, smiling, and shaking his heart out (you get what I mean!).

And as this happened, the women in the car turned their faces towards the other side (what any one of us would do!). The irritated social moron that I am, I slowed further, rolled down the window to shout at the man, and sarcastically applauded him for what he just did. To my disgust, the shame factor being absent for this man, he smiled back again. With a sad look of my face (thinking of where the city is heading), I drove ahead as my mother yelled at me for doing what I had just done. Needless to say, the argument with my mother made me realize that no matter how terrible a sight this is for women, they shun the urge to do something about it because, let’s face it, nothing can change.

To my utter dismay, on a fifteen minute drive, I saw this and some three other men peeing in public. Men of all categories: educated, uneducated. Why couldn’t I ignore it? I just can’t! It’s a terrible sight for me and the smiling face of the man has been haunting me.

…the smiling face of the man has been haunting me.

If we can’t stop such little acts of social disgust, how in the world can we work on making the city rape-free? And I am not exaggerating at all. There are two very strong arguments linked here: One is that of sanitation and hygiene, and the other is that of masculinity.

Let’s take sanitation first. While the Government’s Sanitation and Toilets Initiative has been on for years, the agenda has been to create toilets and not change behaviour. I am of the belief (as a social sector professional) that if any act/law/policy has to be implemented in the country, the aim has to be to target root behaviour first. In this situation, we all would agree that the root problem in the country is the age-old practice of defecating and peeing in open. Women and men in villages, both, have done it. But men have been more open about it.

While the government works towards building more toilets in every household and street in India, targeting the psychology is very important for creating socially acceptable behaviour in this regard. There are two problems: lack of public toilets and lack of an attitude towards NOT peeing in public. And please, don’t give me the argument on how uncontrollable it is. No matter what it does to you, you are not entitled to do it in the open. Not only is it a terrible sight for the city’s people, it is also particularly offensive to women.

Not only is it a terrible sight for the city’s people, it is also particularly offensive to women.

The second argument is that of masculinity overdose. And while I describe this, I don’t care if I am taken to be a feminist or not. I simply fail to understand why, instead of finding a washroom, men find it better to just pull over, and pee anywhere. Day or night. Crowded or secluded. The fact that the idea to find a place to pee doesn’t cross their mind makes me realize that there is a strong need to change this very thought process! And while I read about the fact that it’s a worldwide menace, India seems to be a champion in this.

To me, this is a form of mental abuse. And when I say this, I know many women would agree. Men whom I have questioned about it said that no matter how women see it, they have to do it. I don’t see any logic in that, and yes, not even a medical logic. If you want to pee, find a toilet! Period!

If you want to pee, find a toilet! Period!

In November last year, a woman was killed because she tried to stop a man from peeing outside her house at night. This happened in Delhi. And while this might be one in a hundred cases, this is what fighting against something wrong does to a person in this country. They say there is a fine for it. But tell me, when I see even police officers doing it, who will be held responsible for levying that fine on the men who find it rather amusing to look at women, smile, and pee showing off their private parts for their own sadistic pleasure?

Why Are Indian Women Afraid Of The Streets?