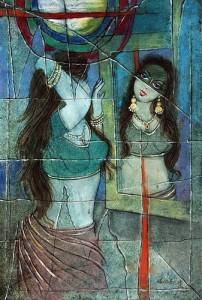 My motherland’s obsession with fair skin continues and even though I am ashamed to admit it I have to be honest and say that I would love to acquire a “Fair and Lovely” (F& L) hue. From the day I was born I have always been made aware of my complexion and ironically it was a blessing in disguise as for some time I gave up on my looks and started to focus on developing a personality.

Once puberty set in my grandmother suddenly gave my mom a wake-up call and that is when “F&L” came into my life. I welcomed it with open arms and rejoiced in its ability to turn me into snow white in a matter of weeks. To be completely fair (pun intended) I did have my mom and a few aunts who swore by my good features and always told me that it would win the day.

People close to me always took comfort in the fact that I was not really dark but reddish and by arming me with “F&L” I was now ready to take on the world. They were not far wrong as it did give me some confidence since I believed that I was inching towards the middle of the fairness spectrum and that now, even I could have an “Attitude” and an “Opinion”.

Finally when it was my turn to jump on the marriage bandwagon there was a lot of hesitation on my family’s side to put down the exact shade of skin colour on the matchmaker diaries/matrimonial sites and the word “wheatish” was decided as a safe bet. After all wheat is an edible item preferred by all Indians and one is likely to get visions of delicious chapattis and with that association the match would be deemed favorable.

Again to be fair (pun very much intended) I did meet a lot of men for whom my “reddish mixed with F&L” hue was not a big deal and I have always for some reason felt grateful towards them. Now when I look back it seems pathetic that I was grateful to people for not judging me on my complexion. Fortunately for me (sorry I cannot shake off the gratefulness) I am now married to a person who discourages me to put any creams to lighten my complexion which to me is a source of never ending joy!

Even with the arrival of the Kajols, Ranis, Malaikas and Bipashas in tinsel town the matrimonial sites are still demanding fair complexioned brides/grooms. The only bright side is that the boys are feeling the heat now with the girls demanding fair grooms as well. My colleague is office who is in search of a comely and homely girl is not ready to compromise on the skin colour of his better half. His argument is that he has a fair complexion and therefore is justified in asking for another person of the same shade. I was tempted to ask if he has narrowed down on the Asian Paints “Shades of White” catalogue but decided to hold my tongue.

So we finally arrive at the million dollar question – Where DO all the poor, dejected and rejected dark complexioned people go??? And suddenly the heavens (or was it hell?) opened up and down came the answer – KAALA MATRIMONY.COM. I can even visualize the advertisement going something like … Are you dark? Do you have difficulties in scoring with the opposite sex because of your melanin infested skin? Stop worrying NOW!! We have the magic mantra, find your soul mate at only 599/ week (yup it’s costly, doesn’t pay being dark) and we will hook you up with the same shade person. Do not attach photos to your profile but instead click on the button to select your exact shade in the catalogue. ♫♫ Aap kaale hai toh kya, hum aapka shaadi zaroor karwaayenge!!!♫♫

*This blogger does not wish to divulge her name and prefers to remain anonymous.

I Was Distressed That I Couldn’t Breastfeed My Baby, But Here’s What I Learnt

And This Is Why I Equated Periods With Pain [#FirstPeriodStories]

Dear Mom: A Letter To A Mom From Her Toddler