The Invisible ‘Home’maker: How We Ignore Domestic Workers Rights In India 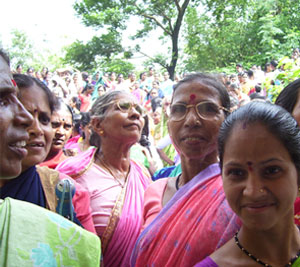 We believe in equal rights, and often share camaraderie with each other regarding atrocities against women. This post focuses on a group of women, who are closely associated with our lives and whose rights are often suppressed under the carpet – domestic workers. When I say “our”, I do mean those of us who read this website, because we are indeed, a privileged group, who can afford to hire domestic workers.

We have often read about issues that women face in office spaces – lack of flexibility, sexual harassment, double burden and so on. Similarly, we need to recognize that our “home” is the “office space” for domestic workers. Even when we are a democratic nation, India does have its roots in a feudal system and many of us seem to have carried it forward. First of all, we do need to have a different terminology to describe people who work in our homes. They are not “servants” who are duty bound to serve the “masters” but a group of “workers” who have rights just like any other worker.

What are some of the issues that we must be aware of as employers of domestic workers?

The ITUC and Jagori reports (PDF) provide some insights into some of the issues faced by domestic workers across the world. I refer to these reports to outline some of the issues that domestic workers face. The Jagori study is based on interviews of 691 domestic workers living in different parts of Madanpur Khadar JJ Colony in Delhi. These 691 workers were engaged by 1958 households. Therefore, this study may not be completely representative of issues across India, but certainly provides us with some discussion points.

Even for some of us, who genuinely believe in an equal world, the rights of the domestic worker are rendered invisible. This is especially true in the case of part time domestic workers. We are spared of any guilt regarding her rights since her lack of rights is the shared responsibility of several employers. For many of us, it does not even seem like the maid in our house is in fact a “worker.”  The Jagori study rightly ascribes this invisibility to the gendered notion of house work. House wives/Homemakers don’t work, do they? Similarly women who do domestic chores are not workers. Moreover, we pay for two hours in a day and wash our hands off any “worker rights.”  By being blind, are we not allowing an oppressive system to flourish because it suits our lives?

What rights? Who says?

For many of us, we are not breaking any laws, because we do not know of any! Some states have included domestic work in their list of notified minimum wages. (PDF) The Unorganized Sector Workers’ Social Security Bill, 2007 was a tiny step in the direction of providing social security for 93% of workers in the unorganized sector, including domestic workers. However, the bill with its lack for clarity on resource allocation and time frame has been heavily criticized as just another piece of legislation with good intentions with no intent of being implemented.

Some domestic worker unions have increasingly fought for the documentation of domestic worker rights. The Domestic Workers’ Welfare Board Bill in Maharashtra was the outcome of one such struggle to ensure the rights of domestic workers. The National Commission for Women (NCW) has drafted a bill known as the Domestic workers Welfare and Social Security Act 2010 (PDF) providing for decent wages, working conditions, paid holidays, holidays, protection against harassment and social security benefits. However, it has not yet been passed in the parliament.

The Jagori study, whose findings is based on survey and interviews of more than 600 domestic workers in Delhi found that 61% of domestic workers belonged to Scheduled Castes and 91% were Hindus. The study however states that there has been some change in the traditional notions of purity related to caste and work. They found that 55% of “cooks” belonged to Scheduled Castes. Earlier, upper caste workers were engaged for activities such as cooking while lower caste workers were engaged for cleaning activities. This study was based on a particular location in Delhi. But is this the reality across India? The study, however found that 30% of employers did not allow domestic workers to use their household toilets. 22% had separate dishes for domestic workers and most workers had their food while sitting on the floor. Do we engage in any of these acts of modern day untouchability?

Many of us work. We do know our rights. Let’s talk about some of them.

As modern day workers in India, how many “leaves” are we eligible for? We have weekly offs, sick leaves and annual leaves, don’t we? We don’t have to negotiate for these rights from our employers. In that case, why does it seem surprising that our domestic worker needs a weekly off and that she needs to be paid, when she visits her hometown, once a year? The Jagori study found that only 12% employers provided for weekly offs for domestic workers. Is that fair?

As people working in corporate organizations, most of us are familiar with the concept of notice period. In case of domestic workers, employers (and workers) seldom have the concept of notice period. The Jagori study says, in cases where the domestic worker takes long leave for visiting her hometown or for marriage/illness in the family, the employer sometimes relieves the worker without any prior notice or compensation. While some workers provide replacement workers for long leaves, they find that these replacement workers take their jobs for lower salaries. This leads to a very unstable financial environment for domestic workers. Do we do such things in our homes?

Ever heard of overtime? In case of domestic workers, there is a mutually agreed job description. Although most of the wages are negotiated based on the number of tasks such as washing clothes, cooking, swabbing and cleaning dishes, there is an unsaid understanding of the number of members in the house. However, the Jagori study found that 69% of employers do not pay extra when they had guests in the house. It requires no great intelligence to understand that the number of people in the house is correlated with the amount of work that a domestic worker does. Why then, do 69% employers conveniently forget that “extra wages” in this case is only “fair wages”?

Other forms of harassment

Domestic workers, generally work in houses in the same neighborhood, so that they can work part time in many houses to make their monthly income. When a police complaint was filed against Lakshmi, this affected her credibility in the neighborhood. Although the Police later found that the theft was done by another person, the damage had already been done. Lakshmi was a migrant worker and has now gone back to her home town.

Do employers take all the responsibility?

Not necessarily. But you can certainly help and not just in your homes. It is important to get domestic workers’ rights to be documented. Therefore, organizing domestic workers is critical. Since they are indeed “invisible” workers, organizing them is a challenge. Most domestic workers are seldom aware of such organizations. As fair and genuine employers, equipped with the power of knowledge, would we care enough to pass on such information to our domestic workers? For instance, the National Domestic Workers Movement has state offices in 17 states in India. A list of trade unions/organizations working in this area is provided at the end of this post. This list is by no means exhaustive. Some domestic workers are afraid that their employers may fire them, if they join unions. Would we encourage our domestic workers to organize and unionize, because we believe that they deserve benefits just like us?

If we encourage unionizing of domestic workers and believe that wages should be fair, it would certainly have an impact on our pockets. Many of us already have a tight month end, with all those EMIs in place, isn’t it? But how fair is it that we think of building our future houses, by cutting down on wages of domestic workers, who are already living a life of harassment?  If we do wish for an equal world where women can walk without fear and oppression, we should certainly strive for such a world for all women and most certainly within the limits of our homes.

Vidarbha Molkarin Sanghatana(VMS) is an organization in Maharashtra which has 51000 registered members and worked for The Domestic Workers’ Welfare Board Bill to ensure the rights of domestic workers:

Manushi is a Trade Union for women domestic workers in Tamil Nadu: http://www.cwdr.org/manushi  In Tamil – http://www.manushisangam.org/

Of 'boring' women and our interests