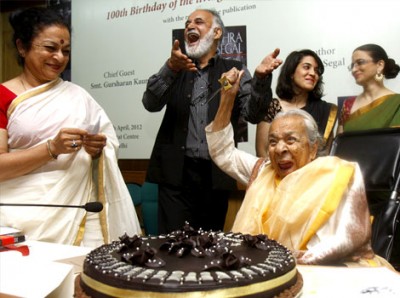 Zohra Sehgal, the centenarian of Indian cinema and the doyenne of Indian theatre, has been entertaining us for more than 8 decades.

Who can resist a smile when they see the diminutive but peppy and vibrant Zohra Sehgal exuding her trademark zest for life? Although the years might have made her look fragile physically, there is no denying the warmth and energy that fill her spirit.

Zohra Sehgal began her career back in 1935 as a dancer. Since then she has gone on to work in several acclaimed positions in TV, theatre and both Indian as well as international cinema. She celebrated her 100th birthday last year by releasing her biography. Zohra Sehgal is a true testimony to a life well-lived.

Zohra Sehgal has been conferred with several illustrious awards including the Padma Shri and the Padma Vibhushan.

– For breaking several taboos as a woman in pre-Independent India, including taking up a career in dance and marrying someone who not only belonged to a different religion but was also younger to her.

– For her invaluable contributions to the Indian arts scene.

– For proving that age can never diminish one’s inner sparkle.