Women’s empowerment and women’s safety in India is closely linked to city planning and design. We learn how. 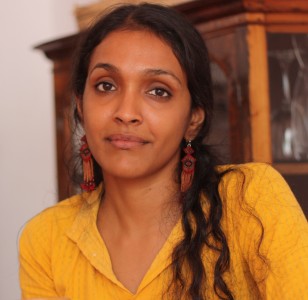 Women’s empowerment and women’s safety in India is closely linked to city planning and design. We learn how.

An urban planner with a deep interest in Indian cities and making them more equitable spaces, Nithya Raman is also the woman behind Transparent Chennai – a project that she started to empower ordinary citizens with data to understand how our city is growing, what the needs of city residents are and how local governments are delivering on them.

In this interview with Nithya, we discuss how women’s safety in India is closely linked to how cities are built and maintained, and why the issue of slums and land rights is close to her heart.

Aparna V. Singh (AVS): After studying urban planning at MIT, what led you to set up your work in India?

Nithya Raman (NR): I actually went to MIT after I had already moved to India. I moved here after I finished my undergraduate degree at Harvard University. I was working in Delhi when I heard about a massive eviction of slums along the Yamuna River. I was shocked – more than 100,000 people’s homes were demolished and the issue got barely any news coverage. That’s when I realized that there was a real conflict between rich and poor residents for space and resources in Indian cities, and that policymakers had not figured out how to mediate this conflict in a just and effective manner.

AVS: Based on your work in studying the structure and growth of urban areas, what would you say are the top 3 barriers to women’s safety?

NR: I think there are actually two important biases among city planners and city managers that really prevent cities from being safer for women: firstly – city streets are planned and built for cars rather than people, and secondly, there is a real bias against street vendors. These two biases often lead to the creation of wide streets that are empty of pedestrians, which can be very unsafe for women.

…city streets are planned and built for cars rather than people, and secondly, there is a real bias against street vendors. These two biases often lead to the creation of wide streets that are empty of pedestrians, which can be very unsafe for women.

AVS: The Transparent Chennai project which you have begun – how did it all start?

NR: When I was working as a researcher with IFMR on urban issues, I helped to organize a public consultation to enable workers from the informal sector to contribute to a new city plan being written for Chennai. I realized during the consultation that there was very little information available about issues facing the poor like public toilets, walkability, access to water, and slums.

I saw an opportunity here: the government was increasingly talking about the need for data-driven governance in cities. New technological developments have also made it easier for people to actually collect, collate, create, and share data.

Transparent Chennai does just that: we collect and create data about neglected issues in the city, usually those that affect the urban poor, and work with residents to create their own data. Our work helps bring attention to these neglected issues, and creates information that can potentially hold the government accountable to improve the quality of services provided to the city’s poorest and most vulnerable residents.

AVS: In the area of sanitation, your work shows that women and children are not using public toilets in Chennai in large numbers. Could you tell us a little more about this?

NR: There is obviously a great need for more public toilets in the city – but when we mapped and surveyed public toilets in one zone of the city, we found that many of the toilets were not being used at all, not even by women and children. What we realized through our mapping was that this was because toilets were not being built where they were needed.

They were not built near slum areas or bus depots or busy market areas. Instead, whenever money was allocated for toilets to the zone, the zonal officers built them wherever the municipality already owned land. So instead of a public toilet next to every slum settlement in the zone, we found clusters of toilets near the Zonal office and along main roads! This meant that even the limited resources being allocated for public sanitation in the city were being wasted on toilets that were barely used.

AVS: Given the various areas this project covers, is there any one issue very close to your heart?

NR: My work on slums and land rights is closest to my heart. It was where I started thinking about cities and how they could be improved.

Cities are exciting places because they are full of possibility. But policies in Indian cities right now are stacked against the poor. Poor people are priced out of the legal land market, so they settle in informal settlements. But most slums don’t have government recognition, and have no protection from eviction.

In Chennai, Delhi and many other Indian cities, a spurt of new infrastructure construction has meant that many slums have been evicted in the last decade, and residents have been left homeless. In cases where the government provides resettlement housing, it’s usually located on the outskirts of the city, far from residents’ sources of livelihood and far from good schools and subsidized government healthcare, leaving residents trapped in poverty.

I think Indian cities can do much better than this. They can be places of real opportunity for all of their residents, and I believe that changing existing policies is key to achieving that vision.