Why Loiter by Shilpa Phadke, Sameera Khan and Shilpa Ranade explores the limits of women's safety in Mumbai, a city touted as women-friendly. 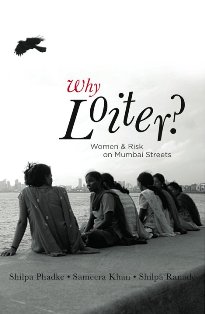 Why Loiter by Shilpa Phadke, Sameera Khan and Shilpa Ranade explores the limits of women’s safety in Mumbai, a city touted as women-friendly.

Mumbai is India’s most cosmopolitan city, noted for its high life, high heels and mini-skirted starlets, a place that rejoices in being safe for women at all hours. According to authors Shilpa Phadke, Sameera Khan and Shilpa Ranade, that is all on the surface. Underneath lies a different Mumbai, a city which questions women’s freedom to wander in public spaces. That is the premise from which Why Loiter? Women & Risk on Mumbai Streets, a book of essays begins.

The authors brought together a group of researchers who spoke to women from localities as different as Kalachowki, Zaveri Bazaar, Chembur and Nariman Point, covering the upper, middle and lower classes. What makes this book different is the fact that in most Indian cities, women do not spend their time questioning their right to hang around in parks and gardens and streets, or worrying about whether public toilets are usable or not. In most cases they grin, bear it and go on with their everyday lives. As Mumbaikars, the authors chose their city to demonstrate the point that women have a raw deal in public life in India.

It is universally accepted that Mumbai is a safe city for women, no matter what time of the day or night. Most of the women who were interviewed began by agreeing that the city was safe. However, when the matter was probed, different findings began to emerge. “But when we say, can you really just hang out on the streets? Can you stand at a street corner, doing nothing? When you ask them if they can access the city for pleasure-that’s when it starts to come out.”

The only place where women seemed at ease were the malls. There, a certain kind of behavior was accepted. However, outside, things were very different. Women were under constant surveillance in terms of clothes and behavior. Worst hit were the single women who lived in single community apartment complexes – when all the residents belong to one community, interviewees felt that they were watched more closely. Some even went as far as to forbid their male escorts to drop them at their doorsteps late at night, preferring to walk down alleyways alone so as not to provoke criticism.

Call centres, for example, are a new phenomenon where women do work all night and they have given rise to a perception that perhaps some kind of strange indecency is at work.

The authors explore concepts like working at night and having fun, where they discuss how a woman working at night and having fun at night could suffer from the same problems. Call centres, for example, are a new phenomenon where women do work all night and they have given rise to a perception that perhaps some kind of strange indecency is at work. Oddly enough, the authors have not explored the lives of women who work in the media – journalists for example, who do night shifts. And perhaps it is misleading to say that a woman would feel safe on her own at night in any corner of London.

There are interesting examples given – how the right to wear a short skirt can differ from corner to corner of Mumbai; it can, for example be perfect in Bandra, doubtful in Matunga and all right or even expected if you’re going to a nightclub in a private car; how women from a single room home come to work wearing jeans in the new high style fashion malls but are forced to change back into their normal clothes before they return home.

Women, the book discovers, perceive themselves as vulnerable and at risk even in a city like Mumbai – this despite the fact that everyone including the authorities agree that something needs to be done to remedy the situation, in some cases through small measures like providing better public toilets for women, mending the steps on overbridges or creating truly public maidans like Shivaji Park.

The book is short, well written and provides a look at something that most women do not even consider except to deal with. The three authors teach an Urban Perspectives on Space course at the TISS’ School of Habitat Studies. The work that they did previously in the field formed the launch pad for quite a few of the concepts in the book.

If you’re planning to purchase Why Loiter?, do consider buying it through this Women’s Web affiliate link at Flipkart. We get a small share of the proceeds – and every little bit will help us continue bringing you the content you like!

Readers outside India can purchase Why Loiter? through our affiliate link at Amazon.