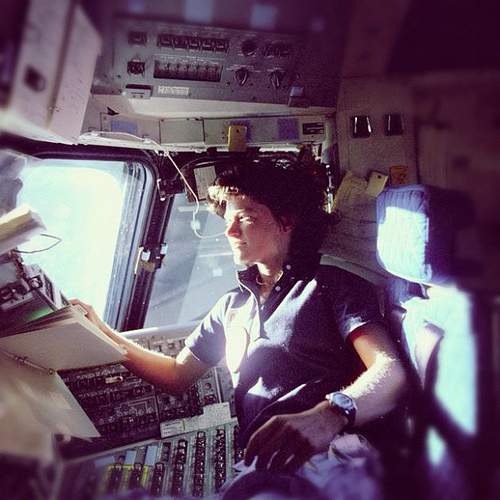 The tides were turned thanks to the first women in space, but there are still major obstacles for women in the field of scientific exploration. What does the future look like?

Though progress is slow and there still remains a tremendous amount of bias in our society, gender inequality is gradually being erased. Having worked in male-dominated jobs for years, I have personal witnessed the change in attitude to women in the industry and how they are accepted in traditional male roles. The chauvinistic barriers that have barred women from pursuing their passions are tumbling one-by-one as women today join the ranks of elite engineers and astronauts in unprecedented numbers.

Fields that for years stagnated with the so-called ‘Old Boys’ Club’ mentality are now being rejuvenated with the spark of a new generation of empowered women. Given the opportunity to compete on fair terms with male counterparts, women like me are questioning old assumptions on a daily basis, fueling innovation and ultimately pushing the boundaries of scientific exploration. So, as the science community evolves to accommodate the fresh perspectives of this vast untapped pool of human potential, it seems the world is poised to be reshaped by the next Tony Stark—who, rather than being a 21st century Iron Man might just be an Iron Woman.

Evolutions in the social dimension of science

When you think about the most influential minds in engineering and space exploration, I bet most of you invoke the likes of Einstein, Neil Armstrong, and Elon Musk. Yet, there have also been countless less-celebrated females in the same fields, whose contributions have profoundly influenced the course of modern thought. Whether they have pioneered ground-breaking technologies or explored regions thought unreachable, women have a long history of overcoming institutional bias in order to push the human race to new heights. In 2013, when exactly half of NASA’s incoming astronaut class was female (for the first time in history), it marked the culmination of a powerful shift in a notoriously male-dominated field.

Women amongst the stars

This shift first gained traction in 1963, when the Soviet cosmonaut Valentina Tereshkova became the first woman to visit outer space. At the time, most of the media attention she received focused on her female looks, describing her as physically attractive to be in the public eye and that she had a father who was a hero. But her skills and motivation is what got her a place in space, her training included weightless flights, centrifuge tests, spacecraft engineering, isolation tests, rocket theory, 120 parachute jumps and pilot training.

Twenty years later, Sally Ride would become the first American woman to reach space. To this day, she remains the youngest astronaut in NASA history, yet as an author, a celebrated physicist and NASA consultant, Ride’s later accomplishments are perhaps even more impressive than her landmark mission to space.

Thanks to pioneers like Ride and Tereshkova, 57 women have now visited space and in 1999, Eileen Collins even became the first female commander of a space shuttle: the Colombia.

Although the tides are turning, women still face major obstacles in the realm of space exploration. To date, sadly only about 10% of all astronauts and cosmonauts have been women, and while ideological bias has certainly been an important factor, physical limitations also make the job of being a space woman more challenging than being a spaceman. Because of a statistically heightened risk of cancer and lower overall body mass, NASA’s radiation exposure limits are 20% lower for female astronauts than for their male counterparts. This means women are ultimately eligible for fewer missions, because radiation exposure takes a serious toll on all those who leave the Earth’s atmosphere.

Toward a brighter future

In my opinion, we are heading in the right direction and into a brighter future. Despite the limitations mentioned, countless dedicated women continue to reshape astronautic history, proving that few barriers can resist a strong enough determination. From physics to the cutting-edge engineering behind modern robotics, women today have immeasurable impacts on scientific thought and technological production. In fact, their physical accomplishments continuously force us to re-evaluate physiological biases almost as much as female intellectual contributions force us to revise the way we understand the universe we live in—a reason many expect women to be at the forefront of space diving, which since Felix Baumgartner broke the world record in 2012, has undergone a modern renaissance.

The future of scientific exploration and a new Iron Woman is certainly brighter now that women are being embraced by the community that so obviously benefits from their inclusion. Today’s pioneers are being celebrated on the terms of their accomplishments: an evolution in social thought that speaks far louder than any single achievement by these world-changing women.

To revive widespread scientific interest and push humanity to new heights, the world needs as many real-life superheroes as we can get in our engineering, robotic and technological world.  So as we move into the future, we can only hope that Iron Women will soon stand on equal footing with Iron Men to make the world a better place.

About The Author: Jenny Beswick is a graduate of engineering who has worked in many scientific and technological careers through her engineering telegraph jobs. Jenny encourages the Iron Women of today to stand strong and pursue the opportunities that are out there.