With women and housework perpetually linked together, is it really surprising that women's careers often take a backseat to their husbands’? 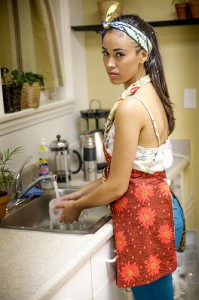 With women and housework perpetually linked together, is it really surprising that women’s careers often take a backseat to their husbands’?

Michelle Obama gave a much-lauded speech at the Democratic National Convention early this month. She used a variation of the old feminist slogan, “the personal is political”, while referring to Barack Obama. This is remarkable because both feminism and femininity are often derided in popular culture, and Obama drew a line from her husband to both.

But the other thing that struck me about her speech was this line: “My most important title is still ‘mom-in-chief’.”

By all accounts, Michelle Obama was a brilliant lawyer. She was Barack’s boss when they met. And not only did she support her husband’s career over her own, but, “Obama presented herself precisely as she needed to in order to be digested by the American people: as a daughter, a sister, a wife, a mother.”

Barack Obama himself wrote: “No matter how liberated I liked to see myself as — no matter how much I told myself that Michelle and I were equal partners, and that her dreams and ambitions were as important as my own — the fact was that when children showed up, it was Michelle and not I who was expected to make the necessary adjustments.”

…the fact was that when children showed up, it was Michelle and not I who was expected to make the necessary adjustments.

And don’t we see that dynamic in India often enough – that women, even women with careers or businesses – are expected to support their husband’s careers to the detriment of their own?

Two years ago, I refused to follow my husband when he accepted a job in another city. I had just started a new job which seemed really promising. I encouraged him to take the job and each of us tried to be supportive of the other without giving up on our ambitions. But a friend challenged my decision and derided me for being too “extreme” (for being invested in my own job!)

Recently, the minister for Women and Child Development, Krishna Tirath, suggested that husbands provide housewives with a share of their income. While this isn’t a new debate, and there are arguments (some of them reasonable) against quantifying the care women put into their households and families, the objective behind it is laudable: ensure that “women’s work” is valued and that women who work within the home are not totally dependent on their husbands and in-laws.

In the U.S., the majority of women are now primary earners in their households. This is due partly to the financial crisis, with women assuming the role as a result of their partners losing their jobs. And of course, plenty of women are single and financially independent.

On an average day, 19 percent of men did housework – such as cleaning or doing laundry – compared with 48 percent of women.

But does that mean husbands (or live-in male partners) are taking on the supporting role? Not enough. The fact remains that the majority of the housework is still handled by women. As this report from the Bureau of Labour Statistics states, “On an average day, 19 percent of men did housework – such as cleaning or doing laundry – compared with 48 percent of women.”

I believe the change will come, that men in general will be as supportive of their wives’ work (within or outside the home) as women have been of their husbands’.

When the friend I talk of above moved to a different city for his career, his wife moved with him. But not much later, when he found himself dissatisfied and wanted to move back, his wife was reluctant; she had found a new job of her own. He made his peace with it, becoming a supporting partner in practice when he hadn’t been one in theory.

And that brings us back full circle to “the personal is political.” Way too often, the overlapping of the personal and political has meant that the woman has held back and made compromises, reluctant to upset domestic life. But often these days, I see men stepping up to be good parents, to support their wives in their careers and inside the home. Where abstract notions of equality might not work, personal circumstances often will – whether it’s the harsh financial realities brought on by an economic crisis or a man’s love for his partner, or maybe even, being forced to compensate his wife for her often-invisible contribution to the household.