An interview with Kavitha Krishnamoorthy of Kilikili, a trust that works to make public spaces more inclusive for all children. 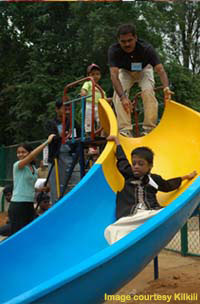 An interview with Kavitha Krishnamoorthy of Kilikili, a trust that works to make public spaces more inclusive for all children.

“How come you never see a child with a disability in a park?” That question, casually asked by one parent, set Kavitha Krishnamoorthy thinking and led to the formation of Kilikili, a Bangalore-based trust that works to make public spaces (especially playgrounds) more inclusive for children. Herself the parent of a child with autism, Kavitha with her husband Ganesh Anantharaman and another couple, Rani and Alfred Benedict started working in this sphere in 2006.

5 years on, Kilikili’s achievements are many: 3 inclusive public parks, many partnerships with parents’ other organizations to transfer the knowledge gained, ‘inclusion events’ for children with disabilities to meet and interact with others and a ‘Buddies’ programme specifically for children with autism and developmental delays.

Taking time off from the multiple hats she juggles, Kavitha chatted with Women’s Web on making life a little more inclusive and fun for all children.

Kavitha Krishnamoorthy (KK): Our children are anyways in special schools. We felt that they need to be integrated – to do things that other children of their age do. We were always very clear that we didn’t want to make this a private park or space.

Before we started with Coles Park (a large and beautiful park in Bangalore), we brought in children with various impairments – mobility, visual, hearing and asked them what they found easy/difficult at the park. We gave them materials and let them design their dream park!

We also had discussions with special educators, teachers and parents. Finally, we translated the wishlist into something doable, which included almost 70% of it. Then we took it to the BBMP (the city corporation).

AVS: Did you receive a positive response from government officials?

KK: The response at the senior levels was very good, although it took some time for junior officials and those on ground to move. The Corporation agreed to finance all the civil work and we raised money for the other costs through donations. Ultimately, the Commissioner decided to extend it to other zones as well and also finance those projects completely.

We have to look at partners in local communities because we can’t be everywhere; one citizens group from Mangalore that recently approached us was spearheaded by a 71-year old woman!

AVS: How did you take the work forward, after Coles Park?

KK: Since then, we have helped make two other parks inclusive – the M N Krishna Rao park at Basavanagudi and the Gayatri Devi park at Rajaji Nagar. We also partner with others who want to set up inclusive spaces and transfer our learning to them, in terms of what children like, what materials work and what don’t etc. We have to look at partners in local communities because we can’t be everywhere; one citizens group from Mangalore that recently approached us was spearheaded by a 71-year old woman!

KK: Currently most modifications are aimed at helping children with physical impairments. It starts with allowing any child to come in – for example, having a ramp for wheelchair access or having well laid out pathways. Another example is having signages in Braille for the visually impaired, although we haven’t been able to do this very well, or modified play equipment that allows children with disabilities also to use them.

Inclusion need not refer only to physical modifications though; for example, a child in a wheelchair cannot enter a park if there is no ramp, but a child with autism doesn’t know how to play!

Inclusion need not refer only to physical modifications though; for example, a child in a wheelchair cannot enter a park if there is no ramp, but a child with autism doesn’t know how to play!

AVS: What are the biggest challenges you face?

KK: When it comes to the parks, maintenance is a big thorn. We keep bringing it to the corporation’s notice, but only about 10% of what is needed is done. Change in general, is very slow. With the first park, we were very lucky – things moved fast because of the Commissioner’s interest, but newer parks are taking a lot of time. Volunteers also get demotivated when things move so slowly.

Another challenge is to institutionalize the process. Even while working with us, BBMP continues to develop new parks without taking inclusion into account. To help on this front, we are working along with the Corporation on a policy guideline and a manual for how to make public spaces inclusive, with detailed implementation help.

AVS: Beyond inclusive parks, what else does your work involve?

KK: Inclusion in its highest sense is that all children can play together as a community. We have been conducting ‘inclusion events’ once every quarter, where children from different schools in the neighbourhood get to know each other. 2-3 times a week, children from special schools in the vicinity come to play in the parks and also interact with each other. Although we started with a few families initially, many activities are now run by a committed core team and volunteers.

We also realized that a year after we had begun such programs, while children with physical impairments had greatly benefited and went on to more interactive play with each other, the children with autism had not, because of their own issues with socialization. We therefore started a ‘Buddies’ program specifically for children with developmental delays and socialization issues. 5 families and 7 children meet every week in a quieter environment since the park is too distracting for such activity. In the little more than a year that we have been doing this, there is slow positive movement. For example, they now know how to ask each for other for something and their anxiety around others has reduced.

So, while the parks are made more inclusive for physical impairments, in the case of children with autism, it is about preparing them for inclusive play.

Talking to Kavitha, one cannot but sense the enormity of the challenge Kilikili has taken on, in a country like ours where awareness and resources are both low. We request you to learn more about their work and support them on the journey!