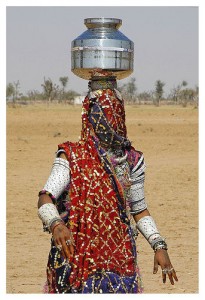 Through the conservation and management of water resources, the Jal Bhagirathi Foundation is working towards empowerment of women in India’s parched villages.

When Kanupriya Harish took a team from Wells for India around Janadesar village in Rajasthan’s Jodhpur district, it was the routine monitoring visit of a donor agency that had supported a sanitation project in the area. Meeting over, a woman took Kanupriya aside and whispered, “It is because of you that our lives have changed.” That said, she melted away into the crowd. There was no way she could have been recognised – her face was covered, a norm for married women in the desolate landscape of Rajasthan.

The woman probably did not need to be identified, for hers was the story of scores of women here. And thousands in the Thar desert region, perhaps even lakhs, whose lives have changed. Maybe the difference is small in a place where water is the most precious thing on earth, but the change has been for the better. And this woman, like many others, can tell the difference.

People of the region, mostly nameless and faceless women, have to walk up to six hours a day across the desert under a scorching sun to fill a 20-litre urn with water. Climate change and unpredictable droughts only make it worse.

Making that discernible difference is Jal Bhagirathi Foundation (JBF), which has been working in the region since 2002 to strengthen community institutions in effectively managing water resources. A four-tiered system comprising Jal Sabhas at the village level (village water user association) to Jan Sansads at the regional level (water forum) ensures active participation from the community. Through meetings, public awareness campaigns, participatory appraisal exercises, and other activities, these institutions bring communities together around water. By doing so, they try and help form effective, accountable village water associations to plan, manage, and implement micro-projects. The focus is on building the capacity of these institutions with knowledge and skill, rather than top-down investments in infrastructure.

This strategy has been mobilised in 300 villages spread over 10,000 km of the Marwar region to revive traditional water harvesting and conservation systems like utilising talabs (village ponds), nadis (grassland ponds), beri (shallow recharge wells), and tankas (underground water harvesting tanks) to ensure optimum conservation of water. At the same time, catchment areas (the area that collects the rain runoff from surface harvesting structures) of water structures like agors (catchments), orans (sacred forests), and gauchars (grasslands) are better developed to improve efficiency of water harvesting structures. The project, which has reached 300,000 villagers so far, empowers communities to take ownership over water management in their villages, particularly the marginalised and disadvantages sections. Women and girls in these villages have reported that through these new innovations, they now have around five to six more hours per day for themselves, which was previously spent gathering water.

Women and girls in these villages have reported that through these new innovations, they now have around five to six more hours per day for themselves, which was previously spent gathering water.

According to Kanupriya, JBF’s project director, “Although many Jal Sabhas have indicated that creating additional water harvesting systems and increasing storage capacity is necessary, it is not sufficient to cope with emerging climate challenges. This is particularly true in recent years, which have witnessed severe changes in rainfall patterns, resulting in reduced efficiency of water harvesting from catchment areas. In response, a number of Jal Sabhas have constructed water channels to collect even short and intermittent rainfall, thereby enhancing efficiency.

Others have started institutionalising social norms and management systems to cope with changing climate and recurring droughts. For example, some Jal Sabhas regulate the use of water depending on the water level in their village pond. Others charge a user fee from people taking water in bulk using water tankers of 4,000 litres, while water is available free for those coming with a 20 litre pot. Some Jal Sabhas have begun implementing mechanisms such as watchmen and printed receipts to ensure that usage is accountable and evenly distributed.”

This system has been working well, and has brought in a strong sense of ownership. Some Jal Sabhas have emerged as strong cohesive groups. JBF has been constantly building their capacities and has set up management systems to ensure maintenance of their water infrastructure. These groups have started levying user charges on water, and the money collected is ploughed back into maintenance. The Jal Samiti and Jal Parishad constantly guide the villages. The Jal Parishad meets on a monthly basis and Jal Sabha members can come to the meeting to discuss issues in their villages. The Jal Sansad meets annually and gives a platform for communities to share their work. This is also the time when JBF makes plans for the year.

Conservation and management of water resources: The journey

That, of course, is how things stand. But what was the response of the communities when JBF started out? Did it take much to get the people moving? Were they receptive to new ideas? Recollects Kanupriya, “When we started work, communities received the idea of reviving traditional water harvesting well, but were unwilling to come together on a common platform for addressing village level issues. Moreover, government programmes had made communities very dependent on such schemes; the idea of self-help therefore was lost. To ensure community ownership and sustainability, all micro-projects implemented by JBF require at least 30 per cent contribution from communities which is then deposited in a bank account. This is also to ensure equal access so that this contribution is collected from a large cross-section of people in the village. Initially, it was difficult to get communities to contribute, but with different mobilisation tools that were used communities duly started coming forward.”

In many of these 300 villages, JBF with its total staff strength of 80 has been able to revive rainwater harvesting systems and build the capacity of communities to manage these structures. Having done that, it is moving out gradually. Kanupriya adds, “We do continue working in some of these villages, deepening our work by taking up other issues like sanitation, safe water, hygiene, catchment area development, land development (grasslands) – all related to water.

As we get new projects / programmes, we expand to new villages. This year we are taking up 20 new villages, where we are experimenting with an internationally recognised system of water management called the IWRM (Integrated Water Resource Management). The Asia Foundation gave us a grant to conduct research on this concept, especially on how to develop a model that can be implemented in the field. The field implementation is being supported by the European Union. In the IWRM, the capacities of the Jal Sabhas are built to plan the development of their villages in a comprehensive manner addressing water and sanitation together. This project will be replicated in an additional 60 villages over the next four years.”

Effective water management for freedom from the idani

But then, JBF does not need to adopt a top-down approach to women’s empowerment. The women of Rampura village, about 40 km from Jodhpur, have their own story to tell. The only water source, the village pond, was 3 km from the village. It was a long haul for the women. The lack of storage facilities at home made matters worse. When this pond dried up during the summers, the women would have to leg 6 km for the water.

Till 10 women of Rampura said “enough” and formed the Jogmaya Jal Mandal (women’s SHG). First, they decided to save and opened a bank account, and even loaned to each other to meet their needs. Next, they took up the issue of water, and approached JBF. After discussions, the women decided to build individual rainwater harvesting tanks in their homes. Capital was a problem, but the women could not be dissuaded. They applied for credit from a bank and carried out systematic and timely savings. They remained dogged for 12 months.

I have been a slave to this idani all my life…… I promise to rid my daughters of the same fate.

After approaching JBF for technical assistance and cost estimations and identifying construction workers in the village, they applied for a bank loan. Unfortunately, the bank manager who was to sanction the loan was transferred to another branch, leaving the women in despair. But giving up was not in their nature – they paid a visit to the new manager and asked again for a loan. Their perseverance finally paid off and they got their water harvesting tank.

What these women of Rampura essentially did was to free their daughters from the burden of the idanis. An idani is a small ring used to stabilise a large urn of water on a woman’s head. The idani is symbolic here. Kanupriya remembers a woman who had told her this, “I have been a slave to this idani all my life…… I promise to rid my daughters of the same fate.”

As long as this woman remains thus empowered, so will her daughters.

About The Author: Subir Ghosh is a New Delhi-based columnist and writer. He blogs at Write2kill

I Refuse To Be Burdened With The Supposed Compliment, SUPERWOMAN