Peggy Mohan’s political fiction, The Youngest Suspect is a gripping story of communal violence, set amidst the 2002-2003 Gujarat riots. 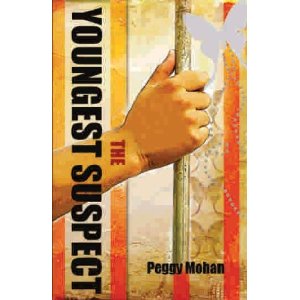 Peggy Mohan’s political fiction, The Youngest Suspect is a gripping story of communal violence, set amidst the 2002-2003 Gujarat riots.

Sabarmati Express and compartment number S6 is not just a number, but a blotch which brings back memories of the horrific brutality that ensued during the Godhra riots. Peggy Mohan’s second book, The Youngest Suspect is a racy narrative where different stories are interspersed and run in parallel. It is always challenging to tell a story of abominable human behaviour through ordinary lives, as horror unfolds to engulf all.

Adil, is a young Muslim boy unfairly booked under the Prevention of Terrorist Activities (POTA). Through his eyes and that of his sister we get an insight into their lives, and that of others who are involuntarily sucked in from the periphery, right into the vortex. He is shown as just another average Indian boy who is preparing for his board exams but unwittingly gets caught in a spiral of activities that ruin his life. It is a chilling reminder that acts of riot and other forms of terrorism can leave the innocent vulnerable and bludgeoned.

The images drawn are powerful but a tepid narrative (at times) and sketchy characterization leaves the reader craving for more. The other story is that of Deepa, a linguist enlisted by the defence counsel to challenge the forced confession extracted out of the boys, including Adil. This part of the story is gripping as the author unveils a scientific enquiry of testimonials and how falsification of evidences has bearing on cases. This part of the narrative is mature, analytical and the minuteness of observations makes it highly readable.

Adil’s character is shown to be somewhat ordinary, perhaps intentionally, to accentuate how ordinary and well-meaning folks leading mundane lives are extraordinarily affected by activities which are not under their control at all. As citizens, our actions not only influence our own lives, but also the community that we belong to.

Adil’s younger sister Faiza is a girl of exemplary courage and saves her family on more than one occasion. She is of slight build but big on courage, another quality that humans have routinely exhibited during times of great strife. The seemingly weak and fragile rise like the Phoenix and challenge destiny and situations where even the “strong” are known to crumble. In the Godhra case, it is a well-known fact that the state chose to look the other way when rioters struck. And then there are policemen like Vijay, who chose to help the brutalized and protested against the state machinery by way of non-cooperation.

So what does the book try and capture? There are several messages actually. The backdrop is the riot of course and how seemingly normal people commit acts of ghoulish proportions that etch a blot on humanity forever. It is interesting to observe the entire evil machinery that perpetrates such acts of barbarism; from age-old hatred to state-incited violence, it is but a study of the evil that men do.

There are also the ills of POTA and the loopholes in the judiciary which at times consume the innocent in its wake. This book can be a primer on linguistic detection when confessions are taken down verbatim and the deviation when data is falsified under a controlled environment. All this is of course done to prove the innocent guilty by exploiting POTA by-laws. It also tells a common tale of love, despite the most harrowing circumstances.

In a nutshell, Peggy Mohan has covered a whole range of emotions through her tapestry of many lives, in all but 240 pages spanning across 31 chapters. It is definitely worth a read.

If you’re planning to purchase Peggy Mohan’s The Youngest Suspect do consider buying it through this Women’s Web affiliate link at Flipkart. We get a small share of the proceeds – every little bit will help us continue bringing you the content you like!

Readers outside India can purchase The Youngest Suspect through our affiliate link at Amazon.