Review of Lona Shoneyin's The Secret Lives of Baba Segi's Wives - insightful novel set in a a polygamous Nigerian household. 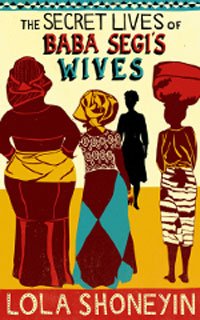 Review of Lona Shoneyin’s The Secret Lives of Baba Segi’s Wives – insightful novel set in a a polygamous Nigerian household.

A couple of years ago I remember going to the Toronto International Film Festival (TIFF) for my first ever Nigerian movie. The movie was titled Abeni and I remember being totally regaled by the spectacle: the colour, the melodrama and the sheer number of people cast in the movie! Nigerian films are very joyous things indeed…with a lot of dialogue from which you get a sense that the Nigerian people are a very vocal lot. They are also sentimental with a flair for drama and exaggeration and a healthy belief in superstition. It is these traits which make for very fun movies and/or books based in that wonderful country.

Anyhow, I digress; the only reason I brought up Abeni is because when I picked up Lola Shoneyin’s book, The Secret Lives of Baba Segi’s Wives, its large patriarchal family with a head of the household who thinks he’s the big gun but whose strings are being subtly pulled by the wives (yes,”wives”, because Baba Segi, our protagonist, is a polygamist with four wives) and the entertaining theatrics of this family of 12 members immediately transported me to the excitement and drama of Nollywood.

Let me introduce you to the wives.

Iya Segi is the first wife or the Queen of Wives.  Even though she is as round as a watermelon and probably on the bad side of forty, she is wily enough to command Baba Segi’s mind, if not his heart. She is the one that dispenses the rations in the household and keeps all the other competing wives under control. Iya Segi is an excellent businesswoman and loves the feel, look  and scent of money.

Iya Tope, the second wife, is meek in comparison and unable, or maybe unwilling, to take charge of anything. She is more than happy for Iya Segi to call the shots. She is happiest at home braiding her daughters’ hair or watching television. She is totally non-confrontational which makes her stick out like a sore thumb amongst this chorus of characters who seem very able to get what they want. Unfortunately, this habit of not wanting to confront anything or anyone makes her unwilling to stand up for injustices in the household.

Iya Femi is the wife I liked the least, but probably the most interesting of them all. Born a Muslim, she converts to Christianity and arrives at Baba Segi’s house with a belly of fire and brimstone. She is the kind of person who (probably because of her miserable childhood) is happiest when plotting revenge on people. She’s the kind of person who suffers from schadenfreude – happiest when someone else is miserable.

And then there is Bolanle. It is not just her education (the other wives are uneducated) that makes Bolanle different, but it is also the fact that of all the wives, Bolonle was the only one that Baba Segi deliberately chose to marry.  The other wives were either gifted to him or they gifted themselves. She is also the youngest and the least competitive of the lot. You would think that  these characteristics would make her Baba Segi’s favorite wife, but it transpires that she is barren and since children are all that Baba Segi cares about, he turns against her…not for long though, for there is a secret waiting to be unearthed which turns the entire household on its head.

The Secret Lives of Baba Segi’s Wives is a treat to read with a plot and storyline that will alternately horrify, amuse, and bemuse its readers. But at the same time, its breezy tale urges a degree of compassion for the women of Nigeria as it is plain to see that even with economic opportunities on the rise, women are not always fully appreciated in that male-dominated society.

The novel is a startling but beautiful evocation of a Nigerian woman’s inner world: of the little village girl whoso wants to be literate; of the young woman filled with yearning to be loved by a young and handsome man and of the wife who comes to harbor a dangerous secret. But it is also a heartbreaking portrait of  the institution of marriage in Nigeria, especially the polygamous kind and the role women play as wives and co-wives. It put under the magnifying glass this “obligation” to produce an heir, especially a male heir. A woman can be uneducated or ‘ugly as sin’ and she will find a husband but if she’s barren she may as well be a statue for no one has any need of her.

Lola Shoneyin is not just a writer to watch – she’s a writer to follow.  You’ll be saying the same thing once you read this fine novel.

If you’re planning to purchase The Secret Lives Of Baba Segi’s Wives, do consider buying it through this Women’s Web affiliate link at Flipkart. We get a small share of the proceeds – and every little bit will help us continue bringing you the content you like!

Readers outside India can purchase The Secret Lives Of Baba Segi’s Wives through our affiliate link at Amazon.