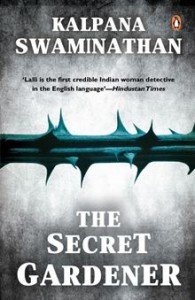 Kalpana Swaminathan’s The Secret Gardener has all the elements of a good detective novel and yet, it fails to grip the reader.

Review by Maitreyee B. Chowdhury

Lalli L.R. It is the moniker given by the Police (Homicide Department) to our 60-year old detective, a la Miss Marple, in Kalpana Swaminathan’s The Secret Gardener. L.R. is “Last Resort,” which roughly means that when the department is at its wits’ end to solve a case, she is the one who is consulted to tie up the loose ends.

Detective fiction writing is amongst the oldest form of literature and is the single most ardent subject on which a relatively large number of books have been penned and also attracted the highest readership. Perhaps, this only makes the competition and the comparisons steep. As such, it is that much harder to concoct yet another plot, draw up a sleuth and expect readers to lap it up; especially, in a craft which boasts of daunting names like Holmes, Poirot, Miss Marple, Lord Peter Wimsey, Sam Spade and Philip Marlowe amongst a host of others. The Indian legacy in this genre has seen two prominent fictional seekers-of-truth, Byomkesh Bakshi and Feluda.

So where exactly does Lalli, figure in this legacy? I’d say, she is a bit of all and yet there are subtle differences. For one, she works more closely with the Police than the others. There’s a freer camaraderie and an acceptance of each other’s role than the archetypal ones, which is more in defiance of the uniformed law-enforcer; as has been the case with say, Sherlock Holmes. Like others of her ilk, she has very high moral standards, not much is known about her past or a family, except for her niece, Sita, who also doubles up as her satellite – a Watson or a Captain Hastings or Ajeet, if you will.

The Secret Gardner has a violent plot and the enfolding evil that humans are capable of, is chilling. Narrated in a matter-of-fact and chatty style, it sometimes leaves the reader bereft of the “chill.” Scripted in Pidgin English, one often has the feeling that it doesn’t do justice to the sense of depravity that is portrayed – or that is intended to – and in the end, it does leave a feeling of incredulity. The characters could have been further developed by descriptive prose through purposeful visualization of human idiosyncrasies. For sure, the writer has a very strong command over the language. Being a doctor, Swaminathan’s usage of words such as, post-mortem interval, Neanderthal sphenoid, amygdal cortical index, archaic hominids, only goes to show that she has a depth of understanding of the human body and police procedures, though this often contradicts the simplistic approach to writing, which one feels is intentional.

In detective fiction writing, plot, good language and chase is everything. The chase can be both mental and physical. There are times when the criminal outwits the sleuth and vice-a-versa. Thus in this genre, if written with skill and dexterity, the reader should ideally find it impossible to put the book down. The wish to know who did it, drives the reader forward, perhaps from wherein comes the phrase – the whodunit genre of writing. But it is in this aspect, that the book fails somewhat. A more persuasive language, better description of characters and cultivating a deep, dark element could have added the necessary zing to it.

As the plot unfolds, we realize that the garden that is being referred to is actually the burial ground that is used to hide the bodies. By an act of serendipity, pieces of skull and bones are discovered which sets off Lalli on the trail. What unravels is a tale of human greed, lust and things that are ugly in life. At times the suspicion directed at the characters is baffling and too quick; fingers are pointed and retracted as the plot unfolds in an unexpected way. There’s a desi touch to the story as Lalli and her team conjure up images spoken in a language that is typically colloquial. Sample this suggestion by one of the characters, “Chicken Biryani, spiced up with rat poison and washed down with two bottles of country liquor”. It is in these touches that the book excels.

The book has its interesting moments.

If you’re planning to purchase Kalpana Swaminathan’s The Secret Gardener do consider buying it through this Women’s Web affiliate link at Flipkart. We get a small share of the proceeds – every little bit will help us continue bringing you the content you like!

Readers outside India can purchase The Secret Gardener through our affiliate link at Amazon.