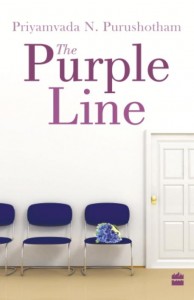 Priyamvada Purushotham’s debut novel The Purple Line, explores the lives of six Indian women, common to whom is a gynaecologist’s office.

The Purple Line is an ambitious book as it sets forth to explore the various aspects of the reproductive experience through the lives of its seven characters. Set in Chennai, the story is narrated in the voice of Dr. Mrinalini Krishnamoorthy, who also plays the part of a gynaecologist to the other six women. The six women featured in her narrative hail from diverse socio-economic backgrounds and are faced with dramatically different challenges.

There is burga-clad Zubeida, who lives a cloistered existence and seeks an almost forbidden pleasure in literature and foreign films. Having lost her own mother at birth, she longs for a daughter to whom she can play the part of the ideal mother. On the other hand, there is Megha who is married into a patriarchal Marwari family and desires more than anything to give birth to a son to improve her standing in her family.

At the very opposite end of the spectrum are Tulsi and Anjolie. Tulsi is an advertising executive and artist-in-the-making who, in the desperate process of trying to make a baby out of nothing, loses the passion in her marriage. Anjolie is a charismatic performance artist who is also trying to conceive when she finds herself locked in a passionate love affair with Tulsi’s husband.

Sixteen-year old Pooja, on the other hand, has managed to get pregnant all too easily and seeks an abortion as a way out of her predicament. Her choices bring her path to cross with Leela, a young wife and mother whose blameless existence ends in tragedy.

Overall, The Purple Line made for an enjoyable read. The plot moved along at a good pace, keeping the reader involved, interested and wanting to know what happens next. The writing was fluid and evocative in most parts. The endings were mostly satisfactory, though not all happy and some a trifle convenient. The characters, including Mrinalini herself, were each different and interesting in their own way. With the exception of Leela, the women were well imagined and easy to relate to.

In the particular case of Leela, I was not really able to understand what the narrator’s beef with her was. She often uses words like ‘perfect’, ‘spotless’ and ‘immaculate’ to describe her, but there is a clear sense that these are not meant as compliments. Sure, her life is devoid of anything risky or unexpected but just being a ‘good girl’ doesn’t call for the borderline yet unexplained contempt that Mrinalini feels for her. This, combined with the fact that she has an almost cameo appearance in the book, made her the one character whose head I could not get into.

Another problem I had with the plot was that I did not find the role of the narrator particularly credible. The book starts out with her relating the stories of these women from a gynaecologist’s lens, based on the interaction she has with them in her consultation room. Later, she makes an abrupt jump into having insights into the intimate details of their daily lives, even their childhoods.

As Mrinalini herself says, “These women were like Schrödinger’s cat. I never saw them outside this consultation room. I never saw them inside their box. And so, to tell you the whole story, I would have to break open the box and look inside”. This did not work for me. I know it shouldn’t bother me because it is a work of fiction after all, but this plot technique robbed the narrative of some of its authenticity and credibility.

If you’re planning to purchase Priyamvada Purushotham The Purple Line do consider buying it through this Women’s Web affiliate link at Flipkart. We get a small share of the proceeds – every little bit will help us continue bringing you the content you like!

Readers outside India can purchase The Purple Line through our affiliate link at Amazon.