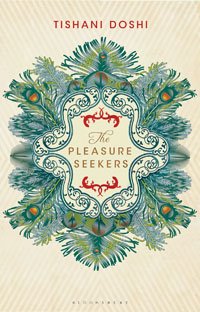 Tishani Doshi’s The Pleasure Seekers – a novel about identity, love across the seas and displacement, doesn’t quite create the magic it promises.

I have been waiting to read  Tishani Doshi’s The Pleasure Seekers ever since it first came out and now that I’ve read it, I would love to be able to wax poetic about  it,  I’d love to be able to tell you to rush out and pick up a copy. Sadly, the book did not live up to to Salman Rushdie’s gushing blurb on the front cover. I wouldn’t call it a ‘bad’ book; no, far from it – it’s a pleasant enough read but nothing to get excited over and definitely nothing to write home about.

You may ask why I was so excited to read this book. Well, it’s a book set in Chennai (one of the places I have lived in) and focuses on a large Gujarati family. Though I am a Punjabi by birth, culturally I am a Gujarati because I grew up amongst them. Also, Babo, one of the sons in this large family marries a Welsh girl (Sian) who comes to live with him and his family in Chennai and I was very curious to see how this interfaith, interracial marriage plays out in the book. (Incidentally, Doshi has a Gujarati father and a Welsh mother and has called her book “a love letter to my parents.”)

This is a novel about family and about home, or more precisely it asks the question, Where is home? It is also about identity, love across the seas,displacement, family bonds and so on. I guess these are all themes that have been used often in Indian immigrant stories and it could be one of the many reasons the story didn’t quite worm its way into my heart.

The prose is flawless, but a little too ‘cutesie’ for me in parts. Intercourse is referred to as ‘shabang shibing’ and sex described as as a boy putting his ‘Whatsit’ into a girl’s ‘Ms. Sunshine’!  Fortunately for the reader however, Doshi is a poet, so every now and again we are treated to bursts of poetry in the writing. Despite those bursts of lovely poetry, I found the narrative structure too ordinary and the characters pleasant, but cozy caricatures at best. In the first half, you are given a tour of almost everyone in Prem Kumar’s family (he’s the patriarch), and then in the second half, Doshi seems to dismiss most of them as she settles down to only Babo’s story along with his Welsh wife, his younger daughter Bean and Ba – Babo’s esoteric grandmother who “smells” people approaching her house “from over the hills.” Ofcourse, that doesn’t take away from the novel being a good read,  but some characters seemed to show promise only to be dismissed.

And then, there’s the unpardonable sin of using too many cliches, especially the caricatures of Indians living abroad and a reliance on stock cultural jokes and scenarios. But aside from these quibbles I’ve listed, The Pleasure Seekers is a pleasant enough read – not memorable by any means – but a nice diversion.

If you’re planning to purchase The Pleasure Seekers, do consider buying it through this Women’s Web affiliate link at Flipkart. We get a small share of the proceeds – and every little bit will help us continue bringing you the content you like!

Readers outside India can purchase The Pleasure Seekers through our affiliate link at Amazon.