The Man With Many Hats

Jael Silliman’s debut novel The Man With Many Hats offers us whimsical glimpses into a Calcutta from a bygone era. 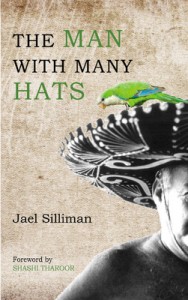 Jael Silliman’s debut novel The Man With Many Hats offers us whimsical glimpses into a Calcutta from a bygone era.

Once upon a time in pre-independence Calcutta there lived a community of Baghdadi Jews who had drifted from the Middle East to settle in the second city of the British Empire. They built beautiful synagogues and established their own lifestyle fitting into the cosmopolitan ways of the city as it was then. Nahoum’s in Calcutta’s New Market was a must at many birthday parties, Jewish or otherwise. In The Man With Many Hats, Jael Silliman, herself a Baghdadi Jewess, has told the story of one such family, most importantly the tale of a relationship between the father Morris Selman and his daughter Rachel.

Morris is certainly a colourful character; every month he brings home an oversized tin of sweets and distributes it to the para children, inviting them up into his spacious flat while he scatters the sweets like gems on the floor. He marries for love, a Jewish schoolteacher Sarah, and delights in being the life and soul of any party, notable for big gestures, practical or otherwise. He is close to his daughter Rachel – Rachel has a brother Jacob, but Jacob does not contribute too much to the story – and brings a baby fawn home for her as a surprise, regardless of the fact that the creature cannot be looked after in a flat. He sends his family on a cruise to England with a circus troupe knowing that they will be delighted by their proximity to the elephants.

Morris’ life is set against the glittering lifestyle that Calcutta used to boast; cabarets, nightclubs and private clubs where the attire was strictly formal – a Calcutta that is vanishing much like the Jewish community. He and his wife Sarah dance regularly at the 300 club, Sarah in an off-shoulder dress that scandalises Rachel’s grandmother.

Rachel grows up, discovers that their happy family life is a sham and moves to America breaking off relations with her father for a while, while her mother moves to Israel. Rachel’s life in America, however, lacks the colour and vivacity of her childhood in Calcutta. Sadly, it reads more like a no frills documentary account, broken by fits of humour when her mother and Hindu mother-in-law compete with opposing mantras for the birth of Rachel’s baby. Silliman can be funny and more of these passages would have been welcome.

Rachel is homesick and marries a Bengali Brahmin – who passes her off to his parents as a Jewish Brahmin, a Cohen. Her father, who reappears in her life, wisely sums up his new son-in-law as a man who adapts to suit his environment. Rachel however does not realise Morris’ wisdom till twenty years later when she returns to Calcutta, now renamed Kolkata. What is obvious is that Rachel’s relationship with her father is a volatile loving one and survives despite fights like the one at Gopalpur on Sea during a family holiday. Possibly because she is too like him in many ways, with a thrusting, intrusive Jewish nose.

At one level the book is about vanished splendours and Jewish rituals – here a glossary may have helped non-Jewish readers to understand the nuances. Silliman’s social scientist background is very evident because the interest in her book is maintained by descriptions of Jewish customs, the Jewish Girls’ Hostel, the Jael choir and family dinner.

One could have asked for a little more colour in Rachel’s life, since all the colour in the novel tends to follow Morris wherever he goes. And yes, while he does actually have many hats, there are many sides to his character.

The acute reader will wonder how much of the story is autobiographical – Selman and Silliman are very close as surnames go and Rachel’s love for her father and dismay at the break up of her happy family life are too palpable to be fiction.

As an account of an almost vanishing community and of life and times in Calcutta, the book is well worth a read.

If you’re planning to purchase Jael Silliman’s The Man With Many Hats do consider buying it through this Women’s Web affiliate link at Flipkart. We get a small share of the proceeds – every little bit will help us continue bringing you the content you like!