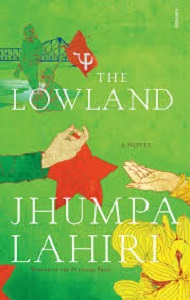 Through The Lowland, Jhumpa Lahiri once again proves that stories which deal with issues of displacement and belonging are her forte.

Jhumpa Lahiri is not happy to find herself called an immigrant novelist – but that is the world she has claimed for her own, beginning with The Interpreter Of Maladies, which won her the Pulitzer. Her books centre on encounters between Bengalis and the new world of America – what differs is the circumstances which bring them to America.

In The Lowland, a story which starts with two brothers, Subhash and Udayan, Subhash follows the tried and tested path of academic success which brings him to Rhode Island. However, Gauri, the wife of his dead brother, comes for quite another reason to begin with. She is brought by Subhash who wants to rescue her from the neglected life of a Bengali widow at the hands of his mother and who marries her. Gradually, Gauri becomes the centre of the book.

She is a woman who is unable to forget her past and that forces her into a kind of detachment from the present, even from her own daughter Bela. She cuts her hair into an American crop, throws away her saris and tries to lose herself in the study of philosophy – though it was through philosophy that she and Udayan fell in love in the first place. He belonged to one of the original groups of Naxalites that rose up in Calcutta in the late ‘60’s, and was a brilliant engineer who used his skills to devise explosives. Udayan was a rebel, his brother a conformist. Gauri, torn between the two, clings to the memory of the rebel’s death and the guilty secret that she hides. That secret makes her unable to adapt anywhere – she was a stranger in her in-laws’ home and she is an equal stranger in Subhash’s life, though she welcomes the anonymity that American academia offers her.

The repercussions of this turn her daughter into a wanderer who, like her mother, vanishes from Subhash’s life, returning intermittently and equally unable to come to terms with her family break up, which has another kind of secret at its heart. Secrets make strangers of them all and haunt them throughout their lives. It is not until Subhash and Gauri are well into their fifties – the traditional age of wisdom – that they are able to look at their past with some kind of detachment and try to come to terms with it.

Lahiri is not judgmental – she sketches out her characters with no comments on their behaviour, though one senses that she probably prefers Gauri to the dutiful Subhash.

Lahiri is at her best in her minimalist descriptions of Rhode Island scenery and the dynamics of American universities. When it comes to Calcutta, there is a kind of “emotion recollected in tranquillity” feeling that results in detaching the reader both from the political chaos as well from the city’s bustle, though she has certainly researched her subject in depth. However it is this detachment that makes the dramatic revelation at the end of the book far less dramatic than it should be. Its strongest parts are the explorations of souls detached from the different worlds around them.

If you’re planning to purchase Jhumpa Lahiri’s The Lowland do consider buying it through this Women’s Web affiliate link at Flipkart. We get a small share of the proceeds – every little bit will help us continue bringing you the content you like!

Readers outside India can purchase The Lowland through our affiliate link at Amazon.