The Chosen One by Sam Bourne’s has his feisty heroine Maggie Costello pulling at the strings of conspiracy theories. 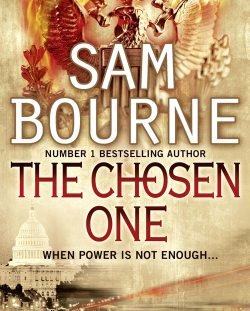 The Chosen One by Sam Bourne’s has his feisty heroine Maggie Costello pulling at the strings of conspiracy theories.

Sam Bourne is the pseudonym of British journalist Jonathan Freedland, who was hyped as the British Dan Brown when his first book, The Righteous Men came out in 2006. The subject matter of the latest one, The Chosen one is very up to the minute: a charismatic, idealistic American President whose existence is threatened by a conspiracy spiralling around him.

At the heart of the novel is Maggie Costello, Bourne’s feisty heroine, whom we have met in The Last Testament. In the first few chapters we discover that she is an idealist who has just lost her job on the White House staff because she referred to the Secretary of Defence as an ‘asshole’.

“Maggie Costello? Working for a politician? The idea was ridiculous. She had ideals, for God’s sake, and ideals had no place in the snake pit of modern politics.”

Maggie however is blessed with a generous helping of luck. She is in the right place at the right place; unexpected people suddenly spill all and a very old phone number still works. She is also blessed with a computer wizard of a sister who can be called up in Ireland at odd hours of the night.

Backing the plot is a vast amount of detail and commentary on the current state of politics in the US. In explaining this, Bourne draws on current sources of political commentary – blogs, Fox News, Glen Beck and Rush Limbaugh, and even Twitter.  Bourne also draws on issues and popular buzzwords from the past few years, which has the effect of making the novel feel extremely current. (For example, he refers to the liberals as “arugula-munching”.)

The revelations that Bourne chooses to throw at the American President may at first glance seem to be slightly underwhelming. President Baker’s psychiatric disorder turns out to be less interesting than expected.  Nor is the campaign finance issue novel enough as scandals go to cause real disruption. However they do not blunt the reader’s expectations.

The Chosen One has all the essential political thriller elements like the sabotaged car, the CIA connection, and a protagonist with a problematic personal life, but manages to rise above all these to create its own level of enjoyment. Bourne has the art of ending chapters on the right note, leaving you balanced on the edge of a precipice breathlessly waiting for more. The concept of the final conspiracy too is fairly interesting since it taps into one of America’s deepest political fears – the influence of banks as puppet masters on the power of nations (though readers may find that it stretches the credibility somewhat).

Bourne has created a fairly believable cast of characters from friends like journalist Nick Du Caines to the villains of the book who are not just two dimensional cartoon characters. On the whole it’s quite enjoyable to give in to conspiracy theories and flip through this page turner of a novel.

If you’re planning to purchase The Chosen One by Sam Bourne, do consider buying it through this Women’s Web affiliate link at Flipkart. We get a small share of the proceeds – every little bit will help us continue bringing you the content you like!

Readers outside India can purchase The Chosen One through our affiliate link at Amazon.