A school teacher from a school run by the Akanksha Foundation shares her joy in teaching children from low-income communities and watching them succeed. 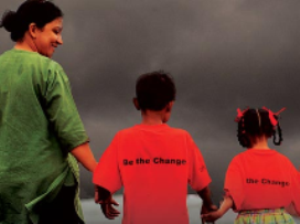 A school teacher from a school run by the Akanksha Foundation shares her joy in teaching children from low-income communities and watching them succeed.

I’m Mandira Purohit, a School Leader at Akanksha. I studied at Cathedral and John Connon School and then completed my BA in Economics at Xaviers College. After having kids, I was a stay-at-home mum but as my children grew up I began to volunteer regularly at their school.

An Akanksha board member, who is a friend, suggested that there are other places to help out, such as Akanksha. Amit Chandra set up a meeting with Akanksha Founder, Shaheen Mistry 6 years ago. I remember having no idea where the Chinchpokli office was, and being very nervous. I had lived a very sheltered life and hadn’t experienced the real world.

A deep bond with the community

On my first day at Akanksha, I observed Yuvathi Sharan, a center at Prabhadevi. I remember a prayer that the children chanted in English, ‘God’s love is so wonderful’. These kids who didn’t have anything were still appreciative of God’s love. I was so moved that I began to teach on that day itself and was offered a permanent position as a teacher.

I found the induction at Akanksha very powerful as I was deeply touched by Shaheen’s video of how she began Akanksha. I made a pledge to myself then that I would do my best to stay with this place. At induction, I met an Akanksha student, Seema Kamble, who was then in college. I was so impressed by her that I felt that if I could at least impact one child’s life in this way I would feel like I had made a difference.

I made a pledge to myself then that I would do my best to stay with this place.

I immediately loved teaching. I had no struggles as far as the children and the community were concerned. The children were young, so they were easy to mould. The bond that I built with the community was very deep and strong. The community looked to us for everything, whether it was issues regarding their children or the other domestic problems they constantly faced.

What really helped me as a center teacher was the support I found in Chitra Vishwanath, a fellow teacher at the center. As the children continued to achieve, I felt more motivated. Through Akanksha I gained a lot from being exposed to forums such as InspirEd where some of the leaders of the best performing schools in the US came and shared their best practices with us and challenged us to deliver even more. I also had the opportunity to complete a lot of external training and then have the flexibility to conduct it in my own way.

Akanksha: a pivotal part of my life

Akanksha became such an important and pivotal part of my life that even when my own children had their holidays, they would volunteer at Akanksha.

After working as a teacher for 2 years, I became an Assistant Education Manager for 4 centers while continuing to teach each morning. I was an AEM for 3 years. Later I was I was given the opportunity to work at a private nursery school in Mumbai and I took up the offer.

Throughout my time there, I was torn between my commitment to Akanksha and my contract with the nursery school. Akanksha then demonstrated its commitment to me and provided me with the opportunity to become a School Leader at a new school: Sitaram Mumbai Public School. And I knew then that I had to leave the private nursery school and go back to work at Akanksha full time.

At Akanksha, you are more than a teacher; you are a mentor and a support for the children and the families.

When I went into the school program, I laid out a clear goal: at the end of their schooling, our children should be at par academically with children from privileged private schools. At Akanksha, you are more than a teacher; you are a mentor and a support for the children and the families. We need to be extremely resourceful, entirely committed and work with a sense of urgency to help our children maximize their achievement. If we play our role well, then we can take our children through to college. The success or failure of a child begins and ends with you as a teacher.

When I started teaching, I soon realized that while attempting to teach the children, I myself was learning so much from them. Earlier, I would get so bogged down and upset by the littlest things, but after interacting with these children, whose lives were plagued with adversity but still managed to smile through it all, I was inspired to do the same. I learnt to look at the brighter side of every situation, which eventually made me a much happier person.

I had thought that I wanted to work at Akanksha to give back to society, and what I quickly realized is that in working at Akanksha, I was receiving so much happiness.

(Updated) A note from Akanksha Foundation: 46 After-School Centers, 9 Schools, 4055 children and growing…Come be part of the story. Apply to be a teacher today! [email protected]