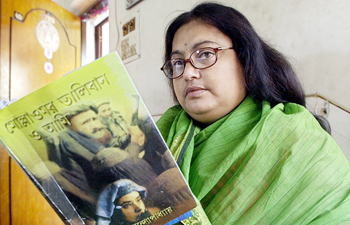 Sushmita Banerjee was an Indian writer who was brutally shot dead in Afghanistan for standing up against extremism and oppression.

Sushmita Banerjee rose to prominence when her memoirs of life in Taliban dominated Afghanistan was published in 1995. Titled Kabuliwalar Bangali Bou (A Kabuliwala’s Bengali Wife), the book narrated Sushmita’s tale of marrying an Afghan businessman against her parents’ wishes, moving to Afghanistan, facing the challenges of life under the Taliban and eventually making a daring escape back to India. The book made Banerjee a household name and in 2003, a Bollywood movie named Escape From Taliban was made based on her story, starring Manisha Koirala.

In Afghanistan, Sushmita Banerjee was repeatedly harassed for several perceived slights such as refusing to convert to Islam, refusing to wear a burka as well as refusing to close down a pharmacy which she ran to help the local women.

Earlier this year, Sushmita Banerjee returned to Afghanistan where she continued her work in healthcare and was planning to write another book. However, sadly, it was not to be. On September 4th she was abducted and murdered. May her soul rest in peace.

– For shining light on the tyranny and cruelty that was rampant in Afghanistan from a woman’s point of view.

– For sticking to her beliefs despite imminent danger to her life.

– For being brave enough to return to Afghanistan to continue her life and work.

The Moonballer by Nirupama Vaidyanathan