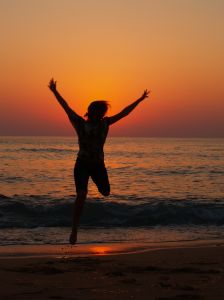 Cancer can overtake your entire life in a flash – if you allow it to. A cancer survivor shares her survivor story.

It is hard to put into words and describe the feelings when you first learn that you have been diagnosed with cancer. It happened to me first in 2003 – I was in my 20s, single, had completed my Masters from the US and had a good career unfolding. The world was full of opportunities and I was looking forward with the vigour, energy and optimism of youth. I had just returned to India when my mother was diagnosed with advanced breast cancer. We started the treatment, anxious and urgent. And then, 4 months into my mother’s treatment, came my bombshell.

It seemed surreal – I could not believe that it was happening to me. Before I could come to terms with the diagnosis, I was overtaken by a number of diagnostic tests and then treatment plans followed by the treatment itself. I experienced a gamut of emotions – shock, sorrow, fear…

It has been quite some time since that moment. A lot has happened. My mother passed away after a long struggle. And just as we were getting back to a semblance of routine, I was diagnosed for a second time.

Life With Cancer Isn’t All Grey

Despite all this, I whole-heartedly believe that life is not all grey. One of the first things I do recall is that a doctor introduced me to another young girl who had finished her cancer treatment and had come for a review. She was smiling. That is something that stayed behind with me – that no matter what I was facing at the moment, I could still smile; and perhaps there was a light at the end of the tunnel.

One of the scary parts about cancer is the melodramatic way it has been portrayed in films. While I concede that it is a very tough disease to battle, it is possible to have normalcy within it. Take Lance Armstrong, he was diagnosed with cancer which had spread to his lungs and brain, but he was treated and then able to win the Tour de France, a gruelling three week cycling race, not once – but SEVEN times.  He has also, since then, married, had kids and started a foundation. So it is important to keep in mind that for the many unsuccessful fights with cancer we hear about, there are many that have turned out well.

…no matter what I was facing at the moment, I could still smile; and perhaps there was a light at the end of the tunnel.

Based on my experience, here are some of the challenges I faced and some of the emotional/mental techniques that I used to cope:

Why me/Why not me?

A common question asked by folks suffering from cancer is “Why me? What have I done to deserve this?” The honest answer is ‘most likely nothing’, and we really don’t have an answer to that. Different faiths offer different explanations to help accept and deal with this situation.  As for me, I realized that when good things happened to me, I never questioned “Why me?” Why ask the question only when something goes wrong? So instead I would wonder, “Why not me?”. It is humbling that there is no answer to this, either. I believe that people have to experience different things in life at various points, and a disease such as cancer is just one such thing. So dispel the notion, that you deserve something (either positive/negative).

Be informed, not paranoid

There is now a wealth of information easily available on cancer. I used to read up on my disease and the treatment options open to me. I asked questions of my doctors and discussed vital issues and they were wonderful and patient in their answers. There was one particular choice that I had to make about my treatment – my family and I researched the internet extensively and read publications by doctors on that specific area. However there is a fine line between using this information and wallowing in it. I was diagnosed with a type of cancer, which, when I read about in cancer support forums, had a worrying prognosis. They were talking about two year survival rates! I went into a state of panic.

I was diagnosed with a type of cancer, which, when I read about in cancer support forums, had a worrying prognosis. They were talking about two year survival rates! I went into a state of panic.

I then had to allow the rational part of my brain to read and assess the statistics wisely. While there was a higher risk for that type, I could still say that there was x% of it not recurring and as long I was in that group, the statistics did not matter at all to me. Additionally, I realized that a lot of the information is likely to change frequently as treatments change. I also read that my cancer was a type that responded well to chemotherapy. Armed with that information, when the doctors suggested a more aggressive treatment plan, I concurred and went with them, and then did not dwell any more on the statistics.

Do away with worry

After my treatment was over, I had to go for periodic reviews. Many cancer patients will tell you that this part is almost as scary as the initial diagnosis as you are almost waiting for the sword to drop. I did not know how to cope with this and spent many sleepless nights leading up to a review. I then realized that I needed to do something to deal with it. So I read a lot of inspirational and self-help material. One of my favourite quotes is ‘Worry does not take away tomorrow’s sorrow; it robs today of its joy and strength’. I remember thinking and telling myself, “Take the best case scenario where you live another 30 years. What a waste of time it would be if you spent even 10% of that time worrying about something!” So I procrastinated the worry (procrastination has its uses) – ”let me worry about it tomorrow; let me worry about it when it happens. Let me accept the things I cannot change”.

When I was first diagnosed with cancer, I was in between jobs and so during the treatment and afterwards I was at home. Time seemed to drag. My mind focused on the discomfort, the journey. The second time around, I was working and continued to work. This really helped ease things because my mind was actively focused on something else during that time. Otherwise 24 hours is too long and the treatment and recovery seem arduous.  So if you are not working or unable to, take up a hobby or pursue something that will help shorten the days.

Don’t let cancer/illness take away your sense of humour. Don’t allow yourself to be bitter or constantly complaining. My family and I have split our sides laughing about melting eyebrows, fly-away wigs, bald beauty and performance-enhancing drugs (steroids are sometimes prescribed along with chemo).

Cancer was not something I expected to face in my twenties. It made me ask so many questions of myself; it made me face my mortality. But I do not want cancer to define me. Cancer is only a part of my life; an event that occurred. If I allow it to make it my entire life, life would be very difficult.

About The Author: When Ramya was diagnosed with cancer for the second time, she felt the need to connect with other cancer survivors in India. Realizing that the existing websites were based in other countries where cultural differences made for different sets of issues and concerns, she established cancerpalsindia. Cancerpalsindia is focused on young survivors because they are faced with a separate set of challenges – of interruption in education or career, of relationships and so on. With this initiative, she hopes to make a difference as best as she can, in her own little way. She hopes to share her story; to inspire and be inspired by so many others through this.

When Cancer Struck My Mother

In The Body Of The World