Canyon Sam’s Sky Train is an intimate, fascinating account of Tibet, told through the lives of its women. 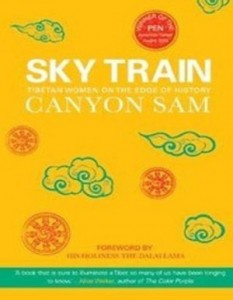 Canyon Sam’s Sky Train is an intimate, fascinating account of Tibet, told through the lives of its women.

The strange thing is that very few people were aware that women were marginalized in Tibet and then brought to the forefront after the Chinese occupation. You realize it while reading through Canyon Sam’s Sky Train. Most tellingly is the story of a Rinpoche who refuses to travel in the company of women, despite being accompanied by the woman’s husband and son as well. He calls the husband aside to tell him this and the result is that the family ends up being separated as the husband tries to escort the Rinpoche safely to the Indian border and the Chinese move in and arrest the two women, sisters who share the same husband. According to Tibetan Buddhism, women are inferior creatures, which is why in Tibet women pray that in their next birth, they be reborn as men.

Canyon Sam is a third generation Chinese American who visited China in an attempt to discover her roots. However she found it a cold country and, instead, was drawn to Tibet. There she met a woman called Tashi in the post office who invited her home with genuine friendliness. Intrigued by Tibet, she became an activist and delved into the way the Chinese occupation and the Cultural Revolution had affected lives, documenting horrifying tales of torture and survival throughout the 1990s.

She returned to Lhasa two decades later to find the famous sky train in operation and a modernized city with high rises and shopping malls blocking the mountain views that the Tibetans had so painstakingly preserved. However Tashi and her family are as welcoming as ever and though the excesses of the Cultural Revolution are over, they have other irritations to deal with in their daily lives; like the harassment of officials ready to levy fines for perceived insults that many Indian readers may find familiar. Or the inducement of cheap alcohol which has corrupted the young.

Canyon Sam revisits the four women whose stories she collected earlier – Mrs. Paljorkhyimsar, Mrs. Namseling, Mrs. Taring and Sonam Choedron – and discovers that they have survived in different ways, one by looking after Tibetan orphans, another by learning Chinese and joining the Opera. All the women agree that after the men fled Lhasa they acquired a new strength. Some of the women cook, drink tea and organize rowdy reunions with their former prison inmates. The upper class Mrs. Namseling is more focused and serious, concentrating on cooking and activism instead of leading a life where ‘every day was a Sunday’, spent in visiting friends and drinking chang.  Mrs.Paljorkhyimsar who was abandoned by her husband for the Rinpoche is 90 years old, bundled in sheepskin, still clinging to her memories of times past. On the television behind her head, a noisy Chinese rap band plays.

Tibetan simplicity and religious fervor has, it is obvious, lost out to Chinese materialism. And there is the anti Dalai Lama feeling which is encouraged, though monasteries still exist. The age old holy Jorethang, is now surrounded by a ‘hellacious’ market and tourists bustling in search of souvenirs. However the women are fervently loyal to the Dalai Lama and at the end of the book, Tashi sends a robe to him through Canyon Sam, with a request for two beads from his rosary as receipt.

Because the story of Tibet is told through the lives of women, it is a more intimate, fascinating account. Canyon Sam does however meander and occasionally you wonder why her view of China and Tibet is so starkly black and white, Tibet good and China bad – especially because of her subject and its gender bias. After all, one of the words for ‘woman’ in Tibet translates into ‘lowly birth’.

If you’re planning to purchase Canyon Sam’s Sky Train do consider buying it through this Women’s Web affiliate link at Flipkart. We get a small share of the proceeds – every little bit will help us continue bringing you the content you like!

Readers outside India can purchase Sky Train through our affiliate link at Amazon.