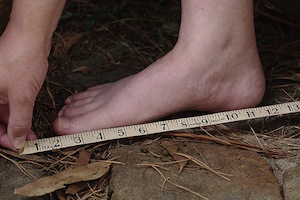 In our final Shopping Story, Arundhati Venkatesh talks about the travails of shopping for footwear – for her over-sized feet!

Arundhati, in her own words: An engineer by degree, a mother, an observer of life and people, a feminist, a minimalist and a compulsive maker of lists! An IT professional in my previous life, I now put my project management skills to use in ways I had not thought possible. I work for an NGO that empowers the differently-abled. I review children’s books at saffrontree.org. Someday, I hope to have my own books up on the shelves and see children enjoying them. I record my adventures with my son at http://arundhativ.blogspot.com/.

I dislike shopping except for the occasional sari buys, and the not-so-occasional book hunting expeditions. Is it a coincidence that there is no fitting for size involved in either? The most depressing kind of shopping for me is when I have to buy footwear.

I must say here that like Noddy’s friend Big Ears, I could easily be nicknamed Big Feet. My feet burst in all directions. As a schoolgirl, I had two choices. Remember the episode in Friends, the one in which Monica covets pretty shoes and ends up with her feet blistered and bleeding? I’ve been there, many times. It was either that, or wearing the highly practical, handmade chappals custom-made by my grandfather’s cobbler.

As an adult living in the pseudo-phoren land that is Bangalore, the latter is not even an option anymore. At five feet seven inches, high heels are a no-no. As the years went by, it became more and more difficult to find simple serviceable slippers. I thought my requirements were straightforward – no glitter, no bright colours, no fuss. Just a simple, black or brown strap to hold the sole in place, and something to keep my feet comfortable – is that too much to ask for?

It was, I found. After trips to half a dozen stores nearby, I decided to go back to the shop in the locality we lived earlier, ten kilometres away. It was there that I found what I was looking for. I bought exactly the same model I had been wearing for a year. A discount on an already inexpensive item meant the purchase didn’t make even a prick in my purse. On the way home, I was pleased with myself for being low maintenance. How many people would be content buying the same model year after year, and spend so little? Then I thought – how many people would go to a shop ten kilometres away to buy a pair of slippers? Low maintenance is the new high maintenance!

A year passed and I needed new footwear again. On a trip to that part of town, I thought I would pop into my regular store and pick up a pair. Imagine my horror when I found the place with its shutters down. After asking around, I returned with a heavy heart – the shop had to be closed for good (bad, for me) because there wasn’t enough business anymore. What was I going to do?

So the hunt began again. I tried store after store, but had no luck.

On one such trip, I walked into one of those chain stores. The salesman took one look at my feet, and went away to service someone else. I looked on as he attended to a lady trying on fashionable and funky footwear, with high heels. He was helping her out, she, asking for his opinion. She was big, but her feet were not. With delicate dainty pedicured feet, she was a shoe salesman’s dream customer.

After a quarter of an hour and some impatience exhibited by yours truly, he returned – albeit unwillingly. I pointed to a few and asked if they were available in my size. “None of these are. You have big feet”, he said. And added, “Try the men’s section”.

As I walked out, I offered myself as a sop, “I also have a big heart.”

How To Live A Simple Life